Our friends from the Galaxy in general, Zarkor and Zerak, have been celebrating Christmas, an obscure Earth holiday.

Zarkor especially is interested in our obscure galactic species. Of course, he considers us an inferior species, as he considers all life-forms except his own as inferior. I think he is only insecure in this sense, having been born a poor orphan. He means well.

Thing is, he got to liking Earth punk music on a random fly-by looking for an adventure. This is what first interested him in Earthlings. He even attended a punk rock concert on Earth. Funnily enough, no one considered his presence unusual that evening.

Zerak can’t quite understand Zarkor’s interest in Humans and their various cultures. He likes to relax in his home on his private planet, keeping tabs on various planetary system stock markets. Zarkor likes to be on the move, looking for exciting adventures. Usually he talks Zerak into joining him with precarious results. Zarkor’s Dumb Luck Brain Implant usually saves the day. Anyway, they both enjoy the Earthling Christmas season. Galactic holidays generally consist of squid-like creatures performing unintelligible rituals that we would definitely not enjoy participating in. So, Merry Christmas from Zarkor and Zerak. (By the way, 'Zarkor's Christmas Story' I've posted in the 'Writer's and Artist's Hangout' section here. Zarkor believes in Santa, maybe you should, too.)  ::) 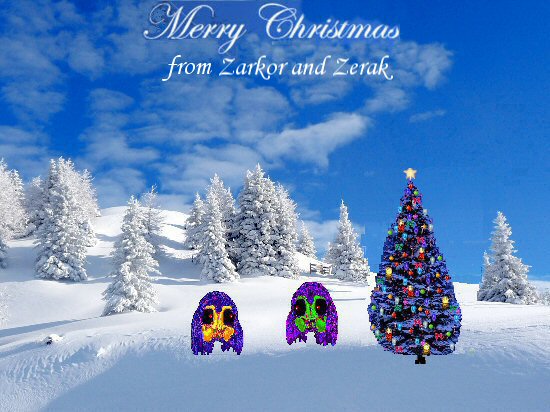