Here’s the famous 1897 poem by Yeats that, I say, frames the mystic’s quest in symbolism and metaphor:

“The Song of Wandering Aengus”

I went out to the hazel wood,
because a fire was in my head,
and cut and peeled a hazel wand,
and hooked a berry to a thread;
and when white moths were on the wing,
and moth-like stars were flickering out,
I dropped the berry in a stream
and caught a little silver trout.

Though I am old with wandering
through hollow lands and hilly lands,
I will find out where she has gone,
and kiss her lips and take her hands;
and walk among long dappled grass,
and pluck till time and times are done,
the silver apples of the moon,
the golden apples of the sun.

Yeats won the Nobel Prize for Literature in 1923 (he’d previously been nominated in 1902, 1914, 1915, 1918, 1921, 1922); time has proved him to be one of the most enduring of all its awardees.  His Irish nationalism along with his political and anthropological astuteness made him uniquely potent as a poet of the modern age.  This early poem, rightly loved by Irish readers and many others worldwide, has been analyzed often for its excellence of form, hypnotic imagery, Celtic mythological references (ie:  Aengus, the fisherman, the silver trout, the hazel bough, the apple), and sense of longing that characterizes much of the human journey.  It is also shaped as an aisling, an old Irish poetic type consisting of a dream vision which usually involves an otherworldly female figure.  At the time of its composition Yeats was enveloped in his mystical inquiries and membership in spiritual/occult societies such as the Theosophists and the Golden Dawn -- an aspect of the poet’s background that is mostly glossed over by his critics and admirers, as if it were only a quirk that was incidental to his genius, and seemingly they are embarrassed for him.  He would have disagreed and so do I.  I think it was the foundation and driver to many of his literary endeavors, although it was mostly masked within the verses and images; it is what bestows a strange loftiness to these poems’ impact and what pricks our curiosity, and is a necessity to understand when unpacking the seed point in many of his works.

In this poem a story is told and an old man is telling it: a magical, mystical event takes place in a dreamlike state wherein, while he’s fishing, a caught silver trout turns into a glimmering maiden, who calls his name runs away.  The teller describes spending the rest of his life searching for her to repeat the experience and hold it.  Those people, like Yeats, who have known the flash of a mystical experience, pursue it as in a quest, often for the rest of their lives.  Here is a later poem from 1932:

My fiftieth year had come and gone,
I sat, a solitary man,
in a crowded London shop,
an open book and empty cup
on the marble table-top.
While on the shop and street I gazed
my body of a sudden blazed;
and twenty minutes more or less
it seemed, so great my happiness,
that I was blessed and could bless.

Here Yeats abandons the clothing of Irish folklore and sumptuous verbiage and gives us a straight, modern rendering of the experience.  Both poems are steeped in mystical underpinnings, the first is relayed to us through metaphor and dream quest and the second poem is an account of the very singular happening.

I hope to further address this angle in upcoming blog entries.  Here is a link that elaborates on the  folklore and Celtic references in the Aengus poem: 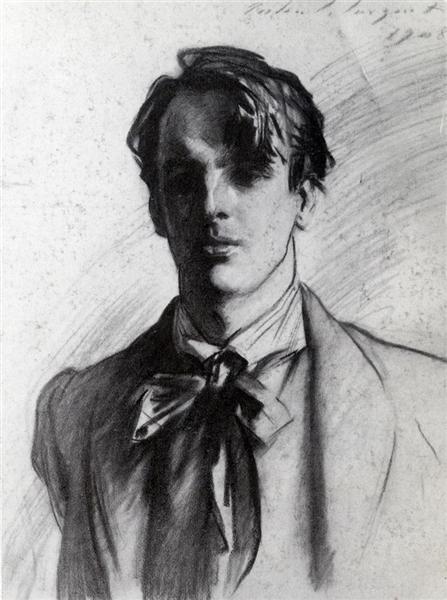