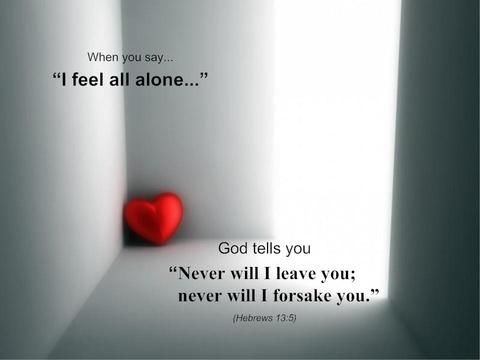 A Friend's Story, on how She learned that She is Never Alone

The exercise of faith increases faith. The exercise of confidence causes confidence to grow. One who approaches My tabernacle in faith is giving evidence of a complete reliance on My merciful love. The Most Holy Sacrament of the Altar is My Heart, open to receive those who will respond to My timeless invitation: “Come unto Me, all you that labour, and are burdened, and I will refresh you. Take My yoke upon you, and learn of Me, because I am meek and humble of heart, and you shall find rest to your souls. For My yoke is sweet, and My burden light.”1

Benedictine Monk. In Sinu Jesu: When Heart Speaks to Hear--
The Journal of a Priest at Prayer (Kindle Locations 3966-3971).
Angelico Press. Kindle Edition.

I sometimes visit a blog that is titled ‘The Friendly Atheist’.  On one of my forays into his domain, I saw an advertisement for a T-Shirt, which had this quote:  “Will Convert for Evidence”.  It made me wonder, what evidence would actually convince anyone who was opposed to the belief in God, or the Infinite?  I would think that there would be none.  The scientific method does have its limitations.  Not everything can be proven by lab testing.

So unbelief, is probably like faith, in the sense that it is a choice that is made over and over again…..well until I guess some deeply felt personal experience will convince some.  However, that would not be evidence for anyone else.

To embrace faith need not be mindless conformity to a set world view.  Nor does it have to be based on ignorance, or fear of opposing views…..like the ideas presented by the ‘Friendly Atheist’.  I am comfortable living in a world where faith has to be developed in order to deepen one's relationship with God.  It is a choice, just as unbelief is a choice, both are made without ‘evidence’ according to the scientific method.

To approach God with trust (A choice, and often a difficult one), does draw one into the depths of God’s loving relationship with us.  A letting go of the fear of being ‘taken in’ also has to be put in its proper place.  A lack of trust in others will make it impossible to develop deep friendships or even pleasant encounters with others. Everyone is untrustworthy and needs to be kept at a distance.  It is a self-fulfilling prophecy.  Trust of any kind can be scary since it makes the heart vulnerable to being seen and then rejected.

Personal experiences are important.  One day I was talking to a friend, who is a very loving woman, who has a deep, loving, relationship with God.  She is intelligent and not given over to fanciful speculations.  She is single, and alone in the world.  She has few family members and they are not that close.  She related to me an experience she had when she had to go to the Emergency Room.  She was there alone, everyone else had some family member with them, but she was alone, and it made her very sad, and a little scared.  She does have some serious health conditions and is well known in that particular Emergency Room.  She was released around 2 AM in the morning.  As she was checked out, she felt forlorn, since she had to go back to her apartment, where she lived without a roommate.  When she got out to the front entrance, she found a rainstorm, and she did not have an umbrella.  So she walked as fast as she could towards her car, in the heavy rainfall.  After she got in the car, she started praying, and complaining to the Lord, about lonely she was.   When she was starting up the car, she noticed something very odd.  Even though it was pouring down rain, and she walked through it, she found herself completely dry!  When she told me, I responded, “well I guess the Lord wanted to let you know that you were not alone”.  For her, it was strong evidence that my statement was right.

In Catholic churches, we have the Eucharist, which is the actual presence of Christ Jesus under the sacramental appearance of Bread and Wine.  To approach this reality in trust, can cause a deep change in one’s heart, a loosening of the knots that can seem like a permanent part of one’s life.  To understand the reality of that love, can only come about by faith, and deep trust.  A death to fear and a simple looking to the Lord.

Sometimes, a guest at our retreat house, will approach me, and ask me about their experiences in front of our tabernacle.  Many are not Catholic, some are not Christian, and some are even somewhat agnostic in their ideas about God.  Yet they come and tell me what they have experienced.  Some experiences are rather astounding, then some are very simple, but direct in how the retreatant is affected.  So I tell them about the presence of Christ Jesus in the Eucharist.  Jesus is there for everyone, be they Catholic, Non-Catholic, Muslim, Hindu, New Ager, or those who struggle with faith, and yes, those who have none.  Those who come here are seekers, and Jesus promised that those who seek shall find.  Jesus is only concerned with the heart.  Some of these people become Catholic, others do not, but they are changed by their experience, and many become regular visitors here in our church, and on our grounds.

One woman related to me, how both she and her husband were atheists.  Her husband died, and for some reason that she did not understand, she started coming out to our grounds.  She did not go into the church, nor did she visit our retreat house, or talk to anyone.  She would come every night and simply sit down by our lake.   Then she told me, that one evening as she was sitting there, enjoying the peace, and quiet, the ducks, and geese, she suddenly found that she believed in God.  She did not ask for faith, it was not an emotional need, yet there it was, she was given the gift of faith, and she ran with it. She became a Catholic, though no one pressured her.  It was pure grace, for God sees all hearts.  We are all pursued by God’s love. –Br.MD