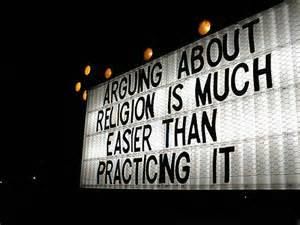 Accosted in the name of truth

A week ago, right after community Mass, I had a run-in with one of our guests. Nice young man, very conservative, devout and thinking about entering the priesthood. He was upset over how we relate to certain types of guests who stay in our retreat house. He was forceful, perhaps angry and seemed to be demanding that I respond in a very specific way. Which of course I could not do, for what he was demanding from me was unreasonable, though in his own mind, of course not so at all; for as the saying goes, perspective is everything. As he was talking ‘at’ me, another guest came up and started to yell at both of us about the incident the young man was speaking to me about. So I calmed him down and asked him to please go and have some breakfast and I would see him a little later.

Our conversation continued for a bit after that. I could tell that the young man did not agree with me, yet to his credit, he offered to go and apologies. I dissuaded him of that and told him that I would relay his apology for him. I understand young people wanting structures that are strong and secure which give direction. My generation did a lot towards the modern trend of tearing down without replacing it with anything substantial. For we wanted to get rid perhaps of too much structure, so yes I understand, though at times I find it unsettling how strong that desire is for rigid structures that in the end actually do more harm than perhaps structures that are not so binding. I have found the only way to deal with it is to respect their position but not allow them to unknowingly do harm to others who come here for rest, healing and silence so that they can seek to deepen their conscious connection with God. While I am not a liberal, I can’t say I am a conservative either, I try to be faithful to my faith tradition and scripture which forms my conscience.

Monasteries are places where many come for healing or quiet and rest. They come here more often than not to simply not be ‘looked at’ in a certain way, to not be judged by others. As I looked at this young man I could see a person who truly was trying to do the right thing, but perhaps went about it in the wrong way. As we talked I told him that his approach was helpful to no one and that the man he ‘accosted’ was emotionally unstable, who was trying to find some order in his life and what he did was uncalled for and to please not do anything like that again.

The man who was confronted came to me and said that his retreat was ruined and he was going to leave. So I asked him why he would allow someone else to do that to him. Cool -down I offered, wait, go for a walk and then make up your mind. He did try to stay, but he left before noon.

The young man was in goodwill, but it is easy to forget that to be a follower of Christ is to try to ‘see’ others in such a way that as little harm as possible is done to another. I have more hope for the young man than for the older man who was perhaps ‘damaged’ some more by the untimely confrontation. He is trying to stay above water and when that is forgotten we can without meaning to, with the best of intentions, plant seeds of destruction, or add water to a seed that has already taken deep root.

It is hard to see the fragility of others
though the lens of fear.