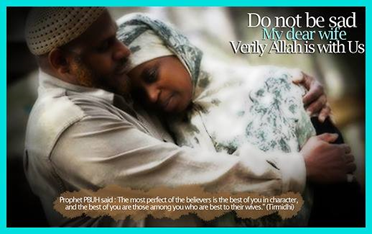 A Muslim couple
(between a rock and a hard place)

As a retreat/guest master here I get to meet some very interesting people. People come here who have no specific beliefs. We get Buddhist, Hindus, New Age, and Christians of just about every denomination, and atheists, and agnostics... Not many Muslims come through here, or if they do, they may not identify themselves as such.

About a year ago we got an email from a very nice couple, Muslim, who wanted to come for retreat and wanting to talk to one of the monks. I responded to them and invited them to stay in our retreat house. They were both professionals, one an Engineer and the other a Doctor. I was looking forward to the encounter.

When they checked in I happened to be in the front office. They were an attractive couple in their 50’s, open and eager to experience what it would be like to be in a Catholic Monastery. They attended all of our services and fit in well.

The next day, after Vespers we met. They did not want to talk about being Muslim but wanted to talk about their spiritual journey towards God. Both had a deep love of God and a longing to move deeper into the mystery, and they told me that they found their faith fulfilling, and help in seeking an ever deeper relationship with the Infinite. There was however a longing in the woman’s eyes that spoke volumes to me. They conveyed the message, ‘please see us as fellow seekers and not terrorist’. We never brought up ISIS, nor the horrors that were going on the world at this time. There was no need, the couple and I knew that this really could not be solved by our talking about it. They were professionals, living in the United States, who considered themselves good citizens and wanted to be treated like anyone else. It was easy to do with this couple. Love and compassion seemed too radiated out of them. Everyone of good will is an exception to any kind of negative stereotype.

They belonged to a group that was trying to reach out to others and to dialogue. Rumi was a good point of reference for me since I love his poetry. His language on getting drunk on God, by using a bar analogy, the longing to letting go of pretense, of fear, and to dance widely in the love of God….to become free as a child once again, in trust, is something that I can resonate to.

I felt a connection with them and can say that I truly felt deeply their desire to be seen, heard and listened to. I also felt sad as well, for I knew that they and many Muslims like them, were being dragged along by the tide of terror going on in the world today. ISIS being the elephant in the room we did not talk about. So I also worried about them. Fear can make decent people do terrible things, and if fear grows about the threat of ISIS, I worry about Muslims who have nothing to do with that, could be hurt or even killed. I don’t think we should underestimate that actually happening. It is actually, here and there, but not widespread as of yet.

Religion deals with mystery, when it becomes an ideology, a closed system of laws and control it is then that it becomes fascist.

(Simple Definition of fascism: a way of organizing a society in which a government ruled by a dictator controls the lives of the people and in which people are not allowed to disagree with the government. A very harsh control or authority.)

ISIS I guess is a prime example of that reality, when politics and religion marry. The temptation to the Will-To-Power is simply too great. In the past my own faith had to deal with this. Religious leaders are really just politicians, interested in their own power base, and the all else become secondary when religion and the state become one and the same.

I have no answers to this dilemma and hope and pray that moderate Muslims can find some way to distance themselves from ISIS and their ilk. Some are beginning to, but to be silent can be read into by many as acquiescence. If it is true that, then I guess we are all in trouble and the war will only get worse.

Meeting with the couple was helpful, however, and I hope that Christians and Muslims will meet and talk and even pray together. God is God, no one owns God, the Infinite. God is not an object that we possess. Also, the roots of Islam go back to Abraham, Isaac and Jacob, so yes, though many will disagree, both Muslims and Christians, we do worship the same God. The God of Abraham, Isaac, and Jacob. What we think about God, or feel about this reality, says something about us more than God. It is like relating to other people, we have ideas about them that also reflect back on us. Yet all those ‘others’ exist apart from our ideas and projections. We are at war with radical Islam, not with Muslims who simply want to live in peace with their neighbors.

We must not underestimate how tribal and primitive and fearful we can become. All through history we have reacted with brutality continuing the cycle of violent behavior. Often this reaction is indiscriminate. If we must fight radical Islam, let’s not bring all Muslims into this war. If we do, we will only make things worse and radicalize more Muslims, who will then through their actions, radicalize more non-Muslims.

It is love, mercy, compassion and empathy that can untie the Gordian knot, freeing us from the eternal turning of the wheel that leads to only more pain, suffering, violence and death.—Br.MD