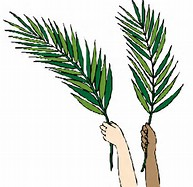 Palm Sunday/The Rising of Lazarus from the dead

On Palm Sunday, when Jesus entered Jerusalem, there was a lot of excitement about him.  He was known in the area as a miracle worker, a healer, and for many, the coming Messiah who would usher in a new era for the Jewish Nation.  He had a lot of opposition by the powers that be, and looked upon as a threat to the survival of the nation.  Then there was the story about Jesus raising Lazarus from the dead!  In midst of that excitement was a mixture of awe, fear, and even dread.  For the news was spreading among the populace about the raising of Lazarus from the dead!

When thinking about the miracle of Lazarus being raised from the dead, it would be good to go back and try to see what happened.  Just think for a moment, about being at the death bed of a loved one, and the family is there around the body waiting for the hearse to come and to pick up the ‘remains’.  It takes a few hours, so the family moves into the living room to wait, sitting, morose, for some, being in shock for others, too numb to feel, or cry or speak.  Some weeping, and even wailing.  So the wait is a form of ‘hell’.  Sitting, knowing in the next room is a corpse, getting cold, and rigor mortis soon to set in. Horrible, yes, but known, and understood.  Actually very ordinary, for we will each one day be the corpse in the other room.

So just imagine a so-called holy man walks in, goes into the bedroom, and everyone wondering what is happening, and he walks out with the loved one, alive, healthy, and back to life, better than before death.  What would happen?  It would be a break with reality as we know it, so I would imagine there would be some fear, even horror, and perhaps some would run out of the house screaming, because the dead do not come back to life…..or do they in some instances, rare, like with Lazarus and the Widow of the city of Nain and her son.  This kind of disruption is a wound, that cannot be healed…..yet wondrous just the same.

Jesus loved Lazarus very much, and I would think that his family, and friends, at the onset of his illness, would naturally think that Jesus would come and heal him once he found out.  For after all he fed the 5,000, raised from the dead the son of the widow of Nain, as well as the daughter of the leader of a Synagogue. People Jesus did not know personally, so yes, he would come.

Jesus did not come.  He waited three days before going, knowing that by then his beloved friend would be dead.  So when he arrived, he stayed away from the gathering, and when Martha came to him, she remonstrated with him that he was not there to heal her brother and his friend.  I would think there would have been some anger, as well as a sense of betrayal, in the heart of both Martha, and Mary.  For her, at the moment, her brother was gone forever, already in the tomb four days, his body already beginning to rot…….there was only loss, sorrow, and yes, anger, at Jesus for not being there.

When he came to Mary, she also complained to him about his not being there to heal her brother.  Jesus told her to have faith.  The people always wondered about his not being there.  For he healed others, why not Lazarus.  Now it was too late.  I am sure that some of the Jews there did not believe in an afterlife, being part of the more conservative branch of Judaism, the Sadducees.  The Old Testament does not give a whole lot of hope for the afterlife, though by Jesus’s time, the belief in an afterlife was strongly held by most of the Jews at that time.

So when Jesus asked that he be shown the grave, they thought he wanted to go there to mourn like everyone else.  Which is true in part, for while there “Jesus Wept”.  “See how he loved him” the people said.

So when he asked that the stone be rolled away, I would think that a collective gasp went up.  As he was told:  “Master he has been dead for four days, there will be stench”.   Nonetheless, they rolled back the stone.  So when Jesus called Lazarus forth, and he shuffled out in his grave wrappings, I am not sure that people yelled Alleluia, and danced.  I would think that there was a bone chilling fear that was felt, even by his sisters.  If I was there, I would think my heart would have skipped a beat, perhaps some fainted, others screamed and ran away……four days dead, wrapped in his shroud like a mummy, with spices, and he shuffles out!  Really!  Yes, Really!

So Jesus told them to unbind him, to set him free.  I often wonder how the relationship with his sisters developed after this event.  I wonder as well how happy Lazarus was to be brought back, since one day he would have to die all over again.  Yet it was for the Glory of God, that people could witnessed this, even if it did cause suffering, fear and awe.  Later after the shocked wore off, the joy of reunion as well.  Yet, to be touched by God comes with a price.  To be lifted out of this world that we call ‘real’, into something else, is not always pleasant, or even wanted.

Jesus knows what is in the hearts of men and women, so he had to hold himself back somewhat.  People wanted to be surprised, to be shown miracles, to be lifted up out of the ordinary, even if there was also some inner conflict over this.  So yes, I am sure there was some fear, but also the hope that Jesus would usher in a new kingdom for the Jewish people, that their enemies would be crushed, destroyed, and they would again rule.

We have assumptions about life that are unspoken, and when we are disappointed, we can turn on the one who is the cause of the disenchantment.  So Jesus knows all of us, our limitation, as well as what is vicious in us, in our lack of ability to truly love beyond personal need, and instinct, yet he continued anyway,  knowing that the very people cheering him, that many of them, perhaps the majority, would be screaming for his death in a few days.  Yes his love goes way beyond our ability to love, hence his ability to show mercy, empathy, and compassion, on us all.

God, seems determined on disappointing us in our expectations’ that are self-centered, tribal, and fed by the desire for power, or simply personal gain, or the desire to escape suffering.  In other words in our limited ability to see into the deeper reason behind it all. We are incapable of seeing beyond our own subjective understanding of the nature of reality.   Yet our faith, deeply lived, and understood is a light along our path.—Br.MD