When I went to Belize while on my way to Guatemala, I was told to visit the Black Hole Drop. I was told this was the Mother of All Caves. Unfortunately, I did not have the time to visit this cave and had to head out to my final destination. If I could have gone back in time, I would have stayed in Belize, but that is another story. To get to the Black Hole Drop, you hike up the foothills of the Maya Mountains and you will reach the mouth of the cave. This is a very unusual cave. Actun Loch Tunich sink hole sits over 300 feet above the basin below and 200 feet above the rain forest canopy that grows out from the sink hole basin.

Reports have come in that UFOs are sighted near the hole and a recent report says that a group of travelers saw a UFO near the mouth of the cave. It was 40 feet long, no wings and had a dome on top. Here is what one witness says: “ I have never seen anything like this in my life. We were approaching the Actun Loch Tunich cave to do the Black Hole Drop Tour and we saw this mysterious object just hanging close to the sink hole and then it moved rapidly unlike any other thing I have ever seen in the air,” Steven Williams of Colorado says.

Many visitors to the Black Hole Drop say that it's an adventure you will never forget. You get lowered down through the mouth of the cave. As visitors rappel further downward, they pass the canopy layer and arrive at a deep hole that looks inky black and that is where the name originates from. Special Note: I rappelled down a big hole, it was called Moaning Caverns, an experience I will never forget. Could the Black Hole Drop be a gateway to an underground complex that was created by extraterrestrials? Many abductees have made claim that their alien abductors have taken them to secret extraterrestrial bases that are underground. Case example: When I went to New Mexico to visit Billy the Kid's Grave with a stopover at Dulce, I was told by locals that they believe there is a jointly operated human and alien underground facility that exists under Archuleta Mesa on the Colorado-New Mexico border near the town of Dulce.

Secret underground complexes are everywhere. Right here in Sacramento, there is a secret passageway from our State Capitol to the California State Library to various other State government facilities. These underground complexes are to be used by our Governor and high officials during a disaster or emergency. Deanna Jaxine Stinson discovered many caverns and caves in her former hometown of Sonora and what she discovered is that most of these caves are extremely haunted by people of the past who temporarily lived in these caves and for past victims of this cave who have actually died in these caves. Many Sonora locals believe that some of the caverns and caves also lead to underground extraterrestrial bases. Why? Because Sonora is in the heart of Gold country and Bill Birnes - UFOlogist made claim that California's Gold Country is also known as Gold Country UFO Triangle. Many people in Gold country see strange lights in the sky and strange UFO activity. The theory is that UFOs are attracted to the gold in the Gold Country UFO Triangle. What also is interesting is that UFOs are seen at the Green Valley Vortex and the Green Valley Vortex is in the Gold Country UFO Triangle. You can read more about the Green Valley Vortex here: www.costaricantimes.com/ghost-hunting-in-the-green-valley-vortex/24220

When I visited Area 51, see article here: www.costaricantimes.com/area-51-seeking-aliens-conspiracy-theories/22799 I was told by many locals of Rachel, Nevada that Area 51 has a secret underground complex that leads to many military bases. One local who claimed he worked there at one point of time says that there is a huge underground base at Area 51 and underground tunnels that lead to Fort Hood, Texas, Fort Huachuca, Arizona, Wright Patterson AFB, Dulce, New Mexico and at one time Fort Ord, because of the UFO base at Monterey Bay. The former employee of Area 51 says that the tunnels also lead to many other military installations and a black ops government group has complete knowledge of the tunnels. You can see my investigation at Monterey Bay here: sacramentopress.com/2008/11/18/monterey-bay-underground-ufo-base/?fbclid=IwAR33W5cvjLE66sGvNYmp2E15IF9_duQjwGclvjuhaI4Qv44HIqhgO_rOmf8

If you don't want to be seen, the best place to be is underground. If you want to conduct secretive experiments, the best place to do it is underground. Harold Waters of Los Angeles makes claim that when he looked into the sewer system in LA, he saw 2 Reptilian humanoids moving about and one of the Reptilian creatures looked at him and hissed. Stories abound in LA that Reptilians live underneath the city and they come from a UFO base underwater near Catalina Island. When I visited Catalina Island, I was told by a shop keeper that UFOs are often seen near the island. We know what is basically above ground, but there is so much to explore underneath our Earth and in our oceans and waterways.  Now, let's take a break from underground paranormal activity and talk about our most recent investigation, see below.
COLEMAN PARANORMAL INVESTIGATION

Contact Person: Rachel Coleman. Address to be at: xxxxxx Sacramento, CA 95827. Activity: Items in house vanish and then reappear. Strange noises heard in the home. Tapping noises are heard at the back door. Orbs seen flying around the house and in one orb photo a distinct face is seen. Lights flicker on and off. The occupant at age 13 died 3 times and afterwards has been plagued by entities. 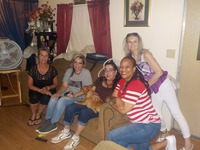 5/11/2019.  Time of the Investigation:  1500 Hours.  Roll Call:  Paul Dale Roberts - HPI Co-Owner; Deanna Jaxine Stinson - Psychic Medium / HPI Co-Owner; Kathy Payne Foulk - Sensitive; Phoenix Skye MacDonald - Empath; Pelenta R. Forrest - Friend to the Occupant; Rachel Coleman - Occupant; Toby - Occupant's dog.
I learned that Pelenta is a victim of alien abduction.  Deanna is also a victim of alien abduction and what is so amazing is that these two had so much in common.  Here are the common threads between these two.  1. Both are musicians and play guitar; 2. Both are artists - they love to paint; 3. Both keep a dream journal and a regular journal; 4. Both are fascinated with Orion's belt - Deanna has the tattoo of Orion's belt on her arm and Pelenta when receiving an MRI - discovered 3 orbs on her brain scan that resembled Orion's belt; 5. Both had implants; 6. Both fascinated with the Akashic Records; 7. Both fascinated with angels, dragons and take pictures of clouds that resemble dragons; 8. Both are authors; 9. Both get migraines; 10. Both hear buzzing sounds; 11. Both encounter UFO activity..etc.  It just went on and on.
My interview with Rachel.
Rachel has lived in this home for 3 years.  Rachel discovered the paranormal activity, because of her security cameras set up in her home.  Rachel's security cameras have caught the following: 1. Big and little orbs moving as if they have intelligent movement; 2. flickering lights; 3. monitor flickers off and on and goes to a white screen and then everything is normal again; 4. Zig Zag moving orb; 5. Designer orb with distinct face.  Other activity: 1. Cold spots felt; 2. Orbs show up on certain times of the day; 3. Rachel has felt entity brush up against her.  Rachel is not frightened from the activity and is intrigued by it.  Pelenta has experienced paranormal activity all of her life and has video tapes, pictures of that activity.  Pelenta has been to the Rancho Cordova Library and discovered that there was a lot of Miwok settlements in the area where she lives and where Rachel lives.  Pelenta once discovered images of Native American Indians on her windshield.  On one particular night Pelenta was playing her guitar and an orb came over and started making dancing moves to her music.  Pelenta watched an intelligent moving orb move towards the window and watch a car go by.
The Investigation:
When we arrived there were grapefruit scattered all over the yard.  They fell off the grapefruit tree.  We are in the house for a few minutes and step outside and the grapefruits were now all placed close together and no one did this.  We captured one EVP, a whispering that sounded like "who?"  At one time there were angel wings formed on the lawn, the angel wings are no longer there, because the lawn was mowed.  Deanna picked up on a 15 year old Native American Indian girl and an old man in the back bedrooms.  We didn't get much evidence, but we saw plenty of security camera evidence.  Deanna conducted a metaphysical cleansing.  UPDATE:  While Deanna was creating her video from this investigation, during my interview with Rachel - we captured strange voice sounds in the background and during the investigation everything was quiet.  The sounds are eerie and strange, check out Deanna's video.  Deanna also caught an energy field around Rachel's father's urn.
Videos from the Investigation:
www.youtube.com/watch?v=DsgjoMqjnTo&feature=youtu.be
www.youtube.com/watch?v=M-QujEBQ_CM&feature=youtu.be
www.youtube.com/watch?v=pGNGTwoRdH8&feature=youtu.be
www.youtube.com/watch?v=qGYQH102Zks&feature=youtu.be
www.youtube.com/watch?v=Bn-715yUgJI&feature=youtu.be
www.youtube.com/watch?v=RTrsi964fz0

Thank you to Pelenta R. Forrest, she gave us her signed book called: Angels - Pass Through.

HPI’s Paranormal Investigation of McKinley Park:
sacramentopress.com/2011/09/06/mckinley-park-mecca-for-ghosts-and-spirits/
See link above, I used to be in Nancy Bradley’s ghost hunting group and investigated ghost activity at McKinley Park with Nancy. We captured some orb photos (inconclusive) and Nancy stated that she could see a little boy next to a tree. I could not prove her claim. I took my wife – Deanna Jaxine Stinson, a psychic medium to McKinley Park and she picked up on animal spirits and she picked up on a little girl ghost in a bright yellow dress spying on her from behind some rose bushes. I instantly did an EVP (Electronic Voice Phenomena) recording (quick and dirty) and the disembodied voice that we captured said in a little girl’s voice: “do you want to play with me?” I would have to say McKinley Park is definitely haunted. Paul Dale Roberts.
Sign in to follow this
Followers 0