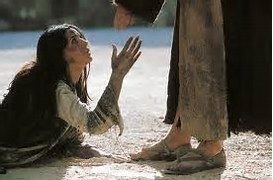 When reading the Gospel, and how Jesus interacts with those around him, can be shocking when really researched.  How Jesus treated others, related to them, was often shocking to his audience.  His dealings with others were not bound by social customs or niceties.
He worked from a different center than I would say that I do, and perhaps most of us.

Shortcuts are desired.  The quickest way to get to a destination, be it by car, or to find a way to figure someone else out.  However, with people, a shortcut can, in the end, be a major obstacle towards any kind of arriving.  People are not objects or things, but living systems, with a deep inner life (even if unconscious), and cultural roots and customs that can make communication difficult.  This also goes when dealing with others from different religious backgrounds.

This short cut can be called, prejudice, or stereotyping.  The problem is that the only ones who know that the person addressing them is using either of the above are the one experiencing it, not the one doing it.  Since they are assumed to be true, even if often shallow and thoughtless.  I would venture to say, that this is so common that perhaps no one is free from it.  I know that I am not, and it comes to light when I am accused of it.  It is not often easy to get at first when accused of such an act.

If I met Jesus in person if he was a preacher, how would I react to him?  Being a religious, a monk, a man of the book, I am most likely more like a Pharisee than I would like to admit.  So I might find myself reacting to Jesus in a not so positive light.  Because being self-righteous can be a hard barrier to break through, he just might be hard on me, depending on the depth of my hard-heartedness,  and blindness.  So what I would need is a more frontal attack in order to reach me.  It would be based on a deep desire to heal me, to draw me deeper in, and perhaps even, in the end, to save my soul.

If I belonged to a part of the population that was considered fringe, or worthless or lost, I might experience him differently, because even if I was hard, bitter, and defensive, deep within I would most likely agree with what others say of me.

However, if I stood before Jesus, knowing my place in society, even if I hated it, how would I experience his look, his gestures, how he talked to me.  Like Matthew the tax collector, or the one leper that returned. Think of the women who followed him, and who experienced deep inner healing from him.  Who in fact, were the ones who went to the cross with him, while the apostles, except for St John, ran and hid.    What brought out such strength, love, courage in the face of such a horror?

Women, in Jesus’s time, were for the most part at the bottom of the social ladder.  For instance, they could not be considered a witness in any kind of court.  Their husbands could divorce them easily, and they had little recourse to justice.  However, I am sure that in spite of that, women were also respected and loved by family and friends, yet over-all, they were unimportant outside of the home.  They were stereotyped, a deep cultural prejudice that was so common that it was considered obvious.

Why would a woman, a known sinner, go into a Pharisee's house, knowing that she was a sinner, an outcast, rejected by society, though used and discarded, to wash the feet of Jesus with her tears?  She made a spectacle of herself and took a chance when she approached Jesus, yet she felt confident that she would be received, and not judged harshly.

I do believe that love, is a form of seeing.  So the deeper the love, the more one sees and understands.  When one is seen by another, not judged, but understood, there can be deep healing, a realization of who one really is understood, and not reduced to an object.  For the women, who washed Jesus feet with her tears, she experienced that and found herself beloved by this man. Who she most likely understood was more than just being another Jew, but something more, loving, divine even.

Her heart broke open, and became ‘flesh’, its stone-like quality was shattered, as it did with Matthew, with Zacharias, and many others who Jesus saw, loved and understood.

Or the women caught in adultery.  Just think, surrounded by men who wished to stone her to death, an angry self-righteous mob, making her into an object something less than human, reducing her to an act, a sinful one true, so she was made less than human.  So they bought her to Jesus.  What did he write in the sand?  Not sure if anything.  Yet these men, even if they hated Jesus knew what he had done with others, they knew that he loved the outcast. Perhaps it made them look deeper than their desire to punish, and saw themselves in the women.  They saw how they were also like her in other ways, but hidden from the eyes of others.  Then they understood that Jesus also saw them.  Perhaps when they looked at what Jesus wrote, they simply saw their ‘true name’, and then they knew that Jesus saw them, loved them, understood them, and brought them to show mercy to the women.  Jesus sent her on her way, forgiven, and in telling her to sin no more, he invited her to reenter society, to become a source of good and healing as well, since she now knew how much she was treasured, loved, and yes seen to the depths of her deepest being.

I would think that the real ‘passion’ of Jesus did not start on Holy Thursday, but was deeply felt all of his life.  I stereotype because it saves me the task of truly seeing those around me.   It is often unconscious, and because of that can cause distress to those who experience it.  I free myself of seeing their heart, suffering, and longing to be seen, and heard.  I believe that we all have that desire, to be truly seen and understood, no matter if we are male or female.  We become hard, bitter, cynical, and judgmental because if we don’t, we began to understand the suffering of Jesus Christ, who could not close off others the way that is almost instinctive for humans.

As Christians, we are called to become other Christ, to learn to see through the eyes of Jesus Christ, to become his hands, his feet, his very heart in a world that can seem heartless…….it is a path of deep joy, but also of pain, since, like the Father in the story of the prodigal, we are all asked to never lose hope for anyone, since we have experienced the love and mercy of God, we do not deny it for anyone else.  We are called to let go of judging others at the depth of their souls, to stop hating, which is a life long process for me, and perhaps for many others. –Br.MD