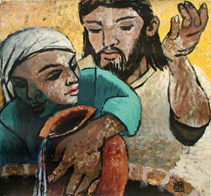 An encounter with the Lord

"You are a Jew and I am a Samaritan woman.
How can you ask me for a drink?"

---When reading the stories in the New Testament that deal with how Jesus dealt with those he met during his life as an itinerant Rabbi. How that story is processed will vary from person to person.  So the short essay below brings to light how I look at the story of Jesus meeting the Samaritan woman at the well.  My own life experiences, as well as what I have observed, of course, has a strong influence on how I interpret this story.  I have no doubt that others can go much deeper than I can at this time of my life, in finding meaning, as well as insights---

It is not uncommon for people to have feelings of being an outsider, on the fringe, or simply being misunderstood.  It could be said that being an outsider, because each human being is unique, is true for all of us.  We all have deep interior lives that can in some ways be a barrier for us to actually communicate with others.  This can be also somewhat of an illusion if we are lucky enough to have loving families or belong to a group that can support us.

What about those who are in truth, on the fringe, isolated, hated even.  In the Scriptures, one of the most powerful stories is the one about the Samaritan woman.  She belonged to a group that was hated by the Jews and were looked down upon with contempt.  The favor was returned, and the Jews were held with disdain by the Samaritans.  They had nothing to do with one another.

The Samaritan woman, because of how she lived, was at the bottom of the social ladder in her culture.  She had nowhere to call home, or family, except with people who were like her.  She probably had a tough, thick-skinned exterior, and was quick to return insults if they were thrown at her.  She could have been hard, but also tired of the give and take.  So she would go to the well at noon to get water since no one would be there.  I am sure it worked out fine for her, until one day something unheard of, at least by her, happened.

She found that a man was sitting at the well.  A Jew and she might have been taken back by his being there.  She most likely did not look at him, and only wanted to get her water and then get away as fast as possible.

The rawness of those who are constantly being shown contempt can grow and this can lead to either violence or some kind of emotional eruption that can leave one helpless.

Perhaps Jesus saw this, if true.  When Jesus asked her to give him something to drink, she was taken back and asked him why on earth is he even talking to her, a Samaritan woman, and


he a Jew.  Asking for hospitality is also a way of showing honor, it was a sacred duty.  Something she most likely never thought would be requested from her.

Jesus saw a human being, someone who is in pain. For he knew her history, yet he showed compassion to her.  Why?  Because he saw deeply, into her heart, soul, her entire being.  In that, she was healed, and went back to the village and told everyone what she had seen.  The villagers saw the difference in her, and by that began to see her in a different light, and actually went to see who this Jesus was.

The ‘Gordian Knot’ that can make up our inner pain and turmoil can only be undone by being seen for who we really are, and accepted and loved, it is then that the knot can unravel.

There are many ways to heal, to make another feel loved and accepted for themselves, can be a powerful way to make that happen.—Br.MD