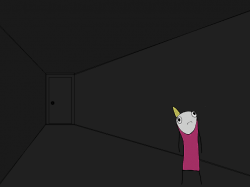 A woman outside the lines
When I meet someone who is absolutely sure that they are right, and have the truth, I tend not to argue. I let them be, and go my way. Sometimes I meet people who are ‘really’ sure of themselves in such a way that they have no one to really relate to since they are people who live ‘outside of the lines’ of what is considered rational, or normal in such a way that there can be some connection if worked at.
About three years ago, I got a call from a woman who wanted to see me, or more importantly the abbot. It was about this time of the year in 2016. She had a big German-Shepherd with her, so she could not bring it into the Retreat House. It was about 95 degrees out and very humid, but I knew that I had to go and talk to her. So I went out to the porch that is connected to our talking dining room. She had a pile of notebooks with her, and a message for the Abbot as well as the community. She told me that she could read hearts and needed to see if the Abbot was good enough for her to talk to him. I told her that she could not see the abbot that he was very busy. So she talked to the next best thing I guess, the Prior.
As she talked, what she was saying made complete sense to her. She was weaving a very intricate web that made it impossible for me to follow. Yes, it was a one-way conversation. So I just sat and listened for about 40 minutes. After she finished she showed me one of her journals. I looked at it. It was filled with drawings, diagrams, and some notes that rambled more or less the way she spoke to me. She told me that I could not keep the journal and took it back. She still wanted to see the abbot, but I told her that was not possible. I asked her to write a letter, but she refused. After she left, I got the feeling she was reading my heart and did not like what she could see…..well that is ok, for there are parts of my heart that I am still working on, and if she could really read hearts I guess what she saw could have caused some disturbance
.
I did feel frustrated after she left because it was impossible to talk to her or to even understand what she was about. It is true, that there are people who are sure of themselves and make it impossible for others to debate or argue with them. However, they are within the normal range and can be understood even if perhaps they are bit rigid and perhaps angry in how they come across. This woman was isolated and perhaps on a daily basis experienced people who could not understand 90 percent of what she was saying. It must be lonely. –Br.MD
Sign in to follow this
Followers 0