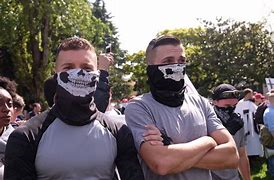 We must not underestimate how tribal and primitive and fearful we can become. All through history we have reacted with brutality.  Thereby continuing the cycle of violent behavior. Often this reaction is indiscriminate. If we must fight radical Islam, let’s not bring all Muslims into this war. If we do, we will only make things worse and radicalize more Muslims, who will then through their actions, radicalize more non-Muslims.

The so-called ALT-Right or certain groups, like Antifa, could be a much more serious problem for
us than Radical Islamic terrorists at least in the United States.—Br.MD

This is not a political piece, I have little understanding of that, I am writing as a common, ordinary Christian.

Today in the United States people are spending a lot of energy on Radical Islamist terrorists.  Any radical group can be a problem for the overall population since they are made up of angry men and women.  The ALT-Right is some cases can be used as an example.  Lately, people who consider themselves part of this grouping have committed horrible crimes against humanity.  The so-called ALT-Right, or certain segments of that movement, could be a much more serious problem for us than Radical Islamic terrorists.

Then, mental illness is the culprit that drives mass-murders to go on killing spheres that is often invoked.  However, that may not be the case:

One study for The American Psychological Association said, “these tragedies are influenced by multiple complex factors, many of which are still poorly understood. However, the lay public and the media typically assume that the perpetrator has a mental illness and that the mental illness is the cause of these highly violent acts."

It goes on to say, "Although some mass shooters are found to have a history of psychiatric illness, no reliable research has suggested that a majority of perpetrators are primarily influenced by serious mental illness as opposed to, for example, psychological turmoil flowing from other sources. As a result, debate on how to prevent mass shootings has focused heavily on issues that are 1) highly politicized, 2) grossly oversimplified, and 3) unlikely to result in productive solutions.”

While extreme emotion can lead to a great deal of delusion, and to a break with reality, it is predicated on the feelings of deep hatred for other groups, be it political, or religious.  Even the vitriol between the far left and the far-right has the seeds of developing into violence.  It some cases it already has.  It is painful to see grown men and women screaming at one another with hatred and rage shown on their faces.

I do think we need to focus on terrorism from without, from Islamic extremists, yet the more dangerous enemy is, at least in my opinion, white suprimist groups.  As well as Antifa.  People who are feeling disempowered.  Just go to any 'White Supremacist' web page.  Most humans in any political, or religious group, tend to be in the middle.  However, when cultural change comes at a rapid pace, along with social breakdown, it is a dangerous cocktail indeed, and more will move towards the right because of fear as well as anger.

I am not sure Christianity is supposed to be a political movement.  However, if Christians actively sought to reach out to others, to listen and to even befriend it could be a good start.  As a Catholic, I have been subjected to all kinds of attacks, at times verbally violent, because of the misunderstandings a certain type of Christian has towards all things Catholic.  This leads me to have empathy for all Muslims who simply seek to live in peace, to love God, and to follow their faith without forcing it on others.  I believe they are the majority.

Below is an essay I wrote in 2016 about my experience with a Muslim couple.  They were delightful, kind, deeply committed to loving God.  While many will disagree with me, we do worship the same God.  The problem is that we get our own understanding of God, as actually being God.  None of us have the whole picture, and I will dare to say, we are all idol worshippers, who as we mature let go of ideas of God that tell others more about us than the God revealed by Jesus Christ.