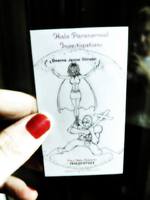 Roberts was born on January 17, 1955 in Fresno, California. He has an Associate Degree in Criminology. In 1977, Roberts for one year was a firefighter with the California Division of Forestry. Firefighting was not his cup of tea.

Dancing Career:
Roberts from 1976 to 1979 became involved in professional dancing and was a dance instructor for Arthur Murrays. Roberts danced with Jeff Kutache's Dancing Machine in Lake Tahoe and Reno. Roberts appeared as an extra in movies like Rollerboogie and Skatetown USA. He later captured the Guinness Book of World Records for disco dancing 205 hours, in which Ripley's Believe it or Not featured him in a cartoon, which can be seen here: www.centralhome.com/ballroomcountry/disco-days.htm

Roberts in 2004 became a paranormal investigator and with over a thousand investigations under his belt and over a thousand paranormal articles he has written lead him to many documentaries. From History Channel's Monsterquest (Mothman episode) to Conversations of a Serial Killer by Two Four Productions to Showtime's Penn & Teller Bull**** - Mayan Prophesy of 2012 to 3 Biography Channel's My Ghost Stories to Mysteries of Angels and Demons by Ives Street Entertainment to Michael Jackson: You are not Alone/In Search of his Spirit, that can be seen here:
www.youtube.com/watch?v=ZMdqnwMFGhU

Roberts and his wife Deanna Jaxine Stinson appeared on E! Chelsea Lately (May 8, 2014 Episode) and was featured on Perez Hilton Hollywood Website: perezhilton.com/tag/deanna_stinson/ and UPI (United Press International) picked up on the story: www.upi.com/Odd_News/2014/05/01/Sacramento-woman-claims-dead-boyfriends-ghost-is-haunting-her-car/1061398944390/  The story about the haunted car was also featured in the Daily Mail.

Of course, the story was misconstrued, where a few news agencies thought Deanna and I were already married and invented this ghost story, they did not realize that Deanna came to HPI as a client first, then we dated, fell in love and got married. Deanna Jaxine Stinson and Paul Dale Roberts completed two more documentaries. One is for the Disney Channel - Maker Studios - seen here: www.youtube.com/watch?v=M7TDJb2k-sA The other is for Asylum Studios - Case Closed with AJ Benza - The Poltergeist Movie Curse Episode.

Writing Career:
Roberts writes community stories and does interviews.  Roberts is a former journalist for the Sacramento Press, former columnist for Haunted Times Magazine, has written small blurbs for Newsweek, Time, National Geographic Traveler and People Magazine. Roberts is a former columnist for Vamperotica by www.vamperatica.com/Brainstorm Comics; Writer's Digest; WebBound; Just Comics and More by Genesis Publications. Roberts was at one time a regular columnist for the now defunct Ceri Clark's - All Destiny Magazine. Roberts is currently a journalist for Before its News beforeitsnews.com/ - Phenomena Magazine UK www.phenomenamagazine.co.uk/ and Costa Rican Times.  Roberts is also a columnist for Phenomena Magazine and Paranormal Underground Magazine. All books connected to Roberts can be found here: www.lulu.com/spotlight/jazmapika1?searchTerms=&pageOffset=3

Roberts has many books published, his most significant books are: Ghosts, UFOs, Monsters and High Strangeness, HPI Chronicles Vol II - Ghost Stories & UFOs and HPI Chronicles Vol III - Beyond the Norm. Roberts also has a comic book out called The Legendary Dark Silhouette.

Hobbies and Recreational Activities:
Roberts is an international traveler and has been to over 59 countries and territories. He has taken lessons flying a helicopter and Cessna airplane. He has taken lessons in skydiving. He has rappelled Moaning Caverns, rode on a hot air balloon along Napa Valley, flew in a glider along Calistoga. He has Para-sailed in Thailand.

ADDED INFORMATION:
Paul Dale Roberts, HPI Esoteric Detective has been involved with many documentaries. Those documentaries are 3 – My Ghost Stories shown on the Biography Channel and Lifetime Movie Network. Paul’s article about the hauntings of the Georgetown Hotel in Georgetown, CA generated a My Ghost Story documentary called Hotel Hell featuring 3 former HPI investigators and some of the stories originated from former HPI investigator Staci Butler. Paul’s wife Deanna Jaxine Stinson has been featured in many documentaries. Special Note: Deanna was asked to be on the Science Channel's NASA's Unexplained Files, but unfortunately, Deanna and I, went to Charleston, SC on the day Science Channel was filming.

Monsterquest – Mothman Episode. Paul Dale Roberts is credited in the credits. Originated from article I wrote about the Mothman.

Ghost Bait www.imdb.com/title/tt3998044/ - Deanna and Paul get acknowledged in the credits for their documentary from one of our investigations, read about it here: jazmaonline.boards.net/thread/414/trenchcoat-cowboy-phantom-placerville

Haunted Hospitals - Travel Channel - Deanna and Roberts will be featured on Haunted Hospitals Season 2.  Filmed in Toronto, Canada
Mysteries of the Outdoors - 2 Episodes: Great Sand Dunes National Park and Preserve; Lassen Volcanic National Park
Travel Channel's Ghost Adventures - Case: B91C6459Z9166 - Ghost Adventures is investigating a home in Antelope.  The occupants of this home called Deanna and Roberts.  This case was given to Zak Bagans and his team to investigate.  Pending Filming.
Sign in to follow this
Followers 0