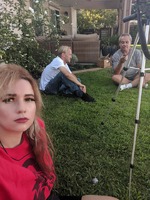 If you ever wonder what HPI's busy schedule looks like, now is your chance to see.  Below is our latest schedule.

September 10, 11, 12, 2019: Travel Channel's Ghost Adventures is investigating a home in Antelope.  Leila, the occupant of this home contacted HPI first.  The case was given to Brittany Breen who represents Ghost Adventures. 9/11 Wednesday 7pm - Gary Anderson Host; Show: Night Dreams; nightdreamstalkradio.com/about-night-dreams-talk.  Guest: Paul Dale Roberts September 12, 2019 – Guest: Paul Dale Roberts – Exploring the Bizarre Radio Show September 13, 2019 Friday/ Time to be there 8pm: Contact Person: Brenda / Case # P91D65865229. Address to be at: Unit 3, Rancho Cordova, CA - Activity: Demonic. Another group went in her home to conduct a cleansing and they made a mess out of things and now the activity is worse.  They now need HPI's help. SEPTEMBER 14 & 15, 2019 - SACRAMENTO PAGAN PRIDE - 10am to 6pm / www.sacpaganpride.com/ At this event - Paul Dale Roberts will be giving a ghost hunting class.  Assisting Paul are: Deanna Jaxine Stinson and Pelenta Forrest Address: Fair Oaks VFW Post, 8990 Kruitof Way, Fair Oaks, CA 95628 September 20, 2019 Friday / Time to be there: 9pm. Contact Person: Heather. Her son 9 years old is being followed by a little boy ghost (imaginary friend) named Kalep, they see Kalep's shadow in the house. Things get moved around, footsteps heard, people touched. This has been going on for 4 years. Address to be at: Sacramento, CA. Case #: Y91X62399U791 September 21, 2019 / Time to be there: 3pm. Contact Person: Arietta. Address: Penryn, CA – Occupants have lived in this home for 43 years. On one particular day, Arietta’s husband saw a piece of cloth protruding from the ground, he yanked on the cloth and attached to the cloth was a human bone, they also found women shoes. They believe the bone and shoes belonged to a Japanese woman that was working the Griffith Rock Quarry nearby. They did not dispose of the bone properly and have paranormal activity in the home. The activity is not bad and basically they just want us to validate the activity. They also have nature spirits outside and want us to investigate that too. Arietta says that the spirits in her home are helpful. Big Al got us this case. Thank you Big Al.  Case # 9B16652R6683 September 28, 29, 2019 - Cal-Expo - Sacramento Reptile Show

October 5, 2019 Saturday. Time to be there: 7pm. Nightsky UFO Hunt. Location: Placerville, CA - Audra Straling says we can camp out in her front yard. Please bring anything you have that will help you observe the night skies. Placerville is part of the UFO Corridor according to Ufologist Bill Birnes. UFOs are seen in this area, because this is part of gold country. If you have lasers bring them! Let's do this! October 6, 2019, Sunday 10pm: Guest: Paul Dale Roberts - Angel Espina Radio Show October 26, 2019 Shannon McCabe's Vampire Ball at Harlows. www.harlows.com/ Deanna Jaxine Stinson interviews participants of the Ball.  Xandean Smith and Paul Dale Roberts will be photographers and scouts/grabbers - finding people for Deanna to interview.  Gregory James is the Videographer.