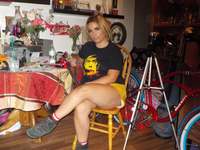 Date to be there: September 13, 2019 Friday/ Time to be there 8pm: Contact Person: Brenda / Case # U916P586H5229. Address to be at: B19P33 Benita Drive, Unit 3, Rancho Cordova, CA - Activity: Demonic. Another group went in her home to conduct a cleansing and they made a mess out of things and now the activity is worse. 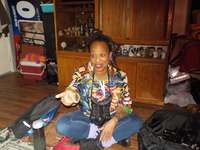 HPI Paranormal Investigators Roll Call:
Deanna Jaxine Stinson - HPI Co-Owner; Paul Dale Roberts - HPI Co-Owner; Pelenta Forrest.
Interview with Brenda:
She moved into this home in 1978.  She feels ghostly people bumping into her, she hears these ghosts talking.  Sometimes her oven turns on by itself.  She feels strong negativity in the house.  She has many roommates and there are household items all over the house.  Brenda feels anxiety all the time.  Another group did a cleansing and they were unsuccessful.  Brenda also feels that there is a good spirit here and that is her deceased grandmother.  Pelenta saw orbs moving about in her night vision goggles.  The orbs can possibly just be dust, we could not prove that it had any intelligent movement.  Pelenta said she felt an entity grab her arm.  She felt that the entity could have been male.  Pelenta also felt a finger tap on top of her head.
Investigation Results.
No EVPs.  No anomalies in our photographs.  Pelenta captured nothing on her Kinnect.  Pelenta's ghost radar shut down, but she had the words: distant, spider, asleep.  The only thing unusual about this is Deanna was composing a song called Jupiter Interlude today and Pelenta watched a movie called Jupiter Ascending.  We captured on the spirit box, the words: Spirits Contained.
Conclusion:
I feel that this home has residual negative energy and there are signs of violence in this house.  In one room there was an overwhelming negative atmosphere and Deanna picked up on a were-hyena which in mystical terms means: "release toxic feelings", "balancing anger" and "having gratitude".
Cleansing:
I conducted a Roman Catholic House Blessing and Deanna conducted a metaphysical cleansing of the house with the help of Pelenta.
Sign in to follow this
Followers 0