In their office of ENIGMA CONSULTANTS S. L., Michael Schlimazl and Jacob Schlemihl deal with a client who asks them if they believe in extraterrestrials.

“Extraterrestrials? I'm afraid not. I'm not even sure the Earth is round. Half of the world's population would be living upside down. Do you know the headache that would cause that?”

“I think the Earth is shaped like a ball”, Jacob answers in turn.

“You see?, your friend is better informed”

“He means an American football”

“Enough of nonsense. I don’t care about the stupid things you believe or disbelieve in. The point is that I am offering you a case on a tray in the name of the president Roosevelt. Take it or leave it”

“Find out whether Albert Einstein is an extraterrestrial? And why has the president thought of us for that task? What about the CIA or the FBI?”

“Jacob, Einstein is not the Giants' new quarterback. He is a reputable scientist.” And turning to their client: “Why does the president suspect him?”

“You see, the president is very stressed lately. He discovers threats everywhere. There are the nazis, the communists, Eleanor Roosevelt, that imbecile who occasionally walks in his underwear in front of the White House...” Suddenly he stares at Jacob, who blushes. “By the way, you look a lot like him, you wear the same hood" "Millions of people wear this kind of hood" replies Jacob. The client continues: “And now he has received a confidential report where they talk about a possible extraterrestrial infiltration on Earth. Specifically they talk of reptilian beings.”

“What do you mean by reptilian?”

“They take the form of humans but they are a sort of lizards. They are recognized because, just like the reptiles, they have a long tongue that they constantly stick out.”

“And why do you suspect Einstein?”

“When you see him, you'll understand. I made an appointment with him on your behalf. You have a scheduled lunch tomorrow at one o'clock at Delmonico’s.”

Jacob jumps: “At Delmonico’s?! Who will pay the bill?!”

“We have already taken on that. Your task is to discover how truth is the president’s suspicion. You'll pretend to be astronomers seeking life on other planets. That will serve as an alibi to ask the right questions.”

The next day, Michael and Jacob show up elegantly dressed at “Delmonico’s” reception.

“No, we wait for another person: Mr. Einstein”

“Mr. Einstein has already arrived.” And turning to a waiter: “Ralph, accompany the gentlemen to table 5.”

On table 5 sits Albert Einstein with his typical frizzy hair and protruding eyes, and sticking his tongue out so that it reaches up to his chin.

An hour later they have finished eating and they chat amiably.

“So you are looking for extraterrestrial life!”

“Most likely, it does exist. But also most likely, you won't find it!”

“Why not?” Jacob protests. But Michael intervenes in support of Einstein:

“Mr. Einstein is right. You never find anything. You are always forced to wear a sock of another color”

“Oh, I don’t question your ability”, Einstein explains, “It’s just that, in the case of existing, it’s probably too far away, in another galaxy perhaps. Your telescopes don’t reach”

“We don’t use telescopes” Jacob points out.

“We have good eyesight.”

Einstein bursts out laughing: “How funny are you!”

“Tell us, Mr. Einstein: What planet… I mean what city were you born?

“Was it your mother who gave birth to you?”

“Ha, ha, ha! You can not be scientists. Scientists are so boring!”

Both stick out their tongues imitating their guest, who when is not speaking always has his tongue out reaching up to his chin.

“Ha, ha, ha! I see! You are clowns! Clowns are great imitators. I love clowns. But if you want to imitate me, let me make some tweaks.

He gets up and shakes their mops of hair until they are frizzy like his own. Then he sits down again: “Now we all look alike”.

“Why is it that you always have your tongue out, if I may ask?”

“Oh, it's the force of habit. In Switzerland I worked for years in the postal service, pasting stamps.”

Michael stands up and exclaims: “Well, that explains it, then. Mr. Einstein, it was nice meeting you, but we’ve got some business.”

Jacob rises too and all shake hands.

“Sure, your show is in the afternoon, I guess. I would like to go see you. I love circus, but I am afraid that I have an appointment with some authentic scientists. Serious people, you know (He winks at them) Tedious people. Since I formulated that equation, they don’t leave me alone!”

“What’s that equation if it’s not indiscreet?” asks Michael.

“You should dedicate yourself to formulate equations and leave Science. That way you wouldn’t have to deal with so many boring people.”

Einstein bursts out laughing: “I'll think about it.” 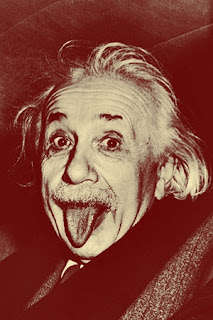