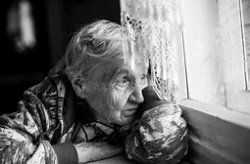 I have known Janet for a long time.  I first met her in 1991, when I was a guest-master for a short time.  For just under two years.   Over the years I have written some stories about our relationship, which while there was a closeness,  was never what  I would call a friendship.  Yet, there was a bond.

She is actually a very intelligent woman and has an easy outgoing personality.  She was a teacher for a while.   Yet, as she aged, her underlying issues became stronger, and in her later years, I would say the last 25 have made her live a life of isolation.  Not complete isolation, but she had alienated herself from her family.  She does have a brother, who over the years when needed, helped with some of the expenses needed to help Janet.  She lived on disability, but it was not enough for everything.  So there was a need to help with her rent, and as well for some of her medical needs.

For the past 15 years, maybe longer, she has lived in a long-stay-motel.  It was a small room with a tiny kitchen and a bathroom.  Over time, it became her home, and she loved it there.   She did have a car, but about 8 years ago she had to stop driving.  She needed people to drive her shopping and to doctors’ appointments.  I would do certain things for her, but I did not shop or take her to the doctor.

She was not always easy to deal with, but overall, things went smoothly.  I do know that she has a serious anxiety issue, which is what caused so much of the problem with her family.   She worries about everything, and no matter what it is, it is always ‘urgent’, and needs to be taken care of.   Because of her suffering, she can be more self-absorbed than most people…..pain does that, especially mental and emotional pain.

She was strong, and because of that, she learned to enjoy what she had.   She was even picky about what she would eat, etc.   Which was a good attribute I believe, for it gave her life color, and I believe, depth.

Over the last two years, because of her declining health, and her isolation, I tried to get her to think about going into a nursing home.   Which is of course not much of a choice, but I was worried about her falling in her room and there would be no one to help her.  We would talk, but she would get upset and did not want to think about it.  I got it.   Living in a room, a small one, which was for her, ‘home’, was much better than a nursing home.  Her brother tried to help as well but to no avail.  I really did not think she would give consent to such a move, but we both had to try.

Well, she did fall, and it took two days before someone found her.  She is not doing well, is not thriving, though this nursing home is a good one.  It is just so hard for her to adapt.  The family situation is impossible, no one wants to talk, or help.  She does, however, have a grand-daughter who lives a few miles away, and does what she can.  However, her life is full of her taking care of her children, who are very young, and her husband.    Janet herself wants nothing to do with the rest of her family.   Janet does not understand the role she has played in the situation.   She is blind to her issues, and how self-centered she can become, because she is always in survival mode, and anxious about, well, everything.

She is not eating, and will not do anything to improve the situation.  It would seem that she has given up.  I can understand why, losing her home of many years, her independence, and her privacy.  She shares a room with another person.

I now in my head that I could not do any more than what I did.  However, I still feel uneasy, and my own powerlessness over the situation is frustrating, though I know that there is really nothing I can do for her at this point.

So a long journey for Janet may be over soon, or perhaps, just maybe, she will start to take more interest in her surroundings.   Like I said above, she has a very outgoing personality, and people do love talking to her.

I do believe that our lives have meaning.  Sometimes that meaning is buried in the great mystery that we call God.   Each day we go through situations that hopefully make us grow.   Janet has her own unique path, and only God sees the depth of her soul.  So I pray for her and am sorry for the times when I could have possibly done more but could not.  ---Br.MD