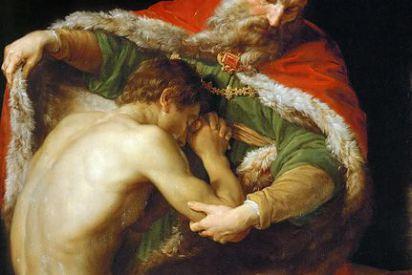 As I age and health problems continue to appear, as my once youthful strength declines and fatigue becomes my companion every day, as I notice that my mind, while still good, is not as sharp as it used to be…you know my Lord…it is were I need to be. It is good to grow old, seeking to love you more, to deal with my doubts and my understanding that my inner struggles are what lead me to your love and mercy and will be with me till the end.

There is much I don’t understand my Lord, so I continue to ponder and deepen my faith and limited understanding. To be open to your Spirit which leads me to understand that this world, my reality is not a closed affair, but wider, deeper and broader than I know, or will, in fact, ever comprehend.
How is it you became one of us? Took flesh, lived with us, healed, loved and then you were betrayed by one of your own. Falsely accused, betrayed by those closest to you, mocked, scourged, crowned with thorns, beaten and forced to carry your cross. You died a death associated with shame, pain-filled and your followers scattered. You died; your body emptied of its blood. Placed in a tomb dark and cold, a stone rolled in its entrance and guarded….yes nothing inside but a lifeless corpse……as we will all one day be.

It should have died Lord, the movement you started, like many before yours, once the leader was taken away, its followers scatter. The apostles were just men with limited courage and they failed you, Peter denied you, his fear so great. Only the women were there. Well John was with them, but he was so young, perhaps the women ennobled him to go with them.

Funny Lord, you appeared first to women, who were not considered capable of being a witness. To those who were brave and fearless you first appeared, the men after who cowered in hiding. No doubt your mother first of all. Many saw you over a 40 day period; Paul speaks of the 500, of which I fear were soon overwhelmed giving their witness, of your victory over death.

In the end, you filled them with your Spirit. Men will die for what they believe in. It happens all the time. I know of no one who will die for what they know is a lie. The Apostles, cowards to the last man (John perhaps the only exception), in the end, gave their lives as a witness to the resurrection, they saw you, touched you and ate with you and yes embraced you. You showed only mercy, compassion and understanding. They embraced your grace and were healed of their deep shame.

No one can own you, Lord, though we try, for what you are about is still something we as Christians are called to consider, ponder and hopefully be a witness of the sort that will allow others to see your reality. The opposite is often sadly true.

As I age, I am aware that I very much like your Apostles when my faith falters, or I do not understand and like them I to become cowardly. Self-knowledge seems to lead to further understanding of my own inner chaos and failure and sins….which leads me back to you.--Br.MD