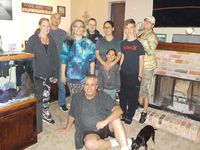 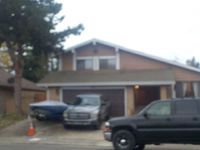 THE INVESTIGATION:
We enter a home with an incredible loving family.  Mary Garcia and her husband Mike, along with their daughter and son greeted us with open arms to their beautiful home in Rancho Cordova.  Mary's little daughter is talking to an entity (an imaginary friend).  Children from ages 1 to 8, have psychic abilities and that is why most children in that age bracket will have an imaginary friend.  After age 8, most children lose their psychic abilities, except for the few that maintain their psychic ability into adult life.  This house may have poltergeist activity, there is tapping on the windows, bangings on the walls. A family member to this family has been dabbling in the dark arts, the occult, Satanism.  Mike showed Deanna all kinds of occult drawings that this family member did.  Deanna picked up on a portal in one of the bedrooms.  We had 2 investigative sessions that would last up to 40 minutes for each session.  After each session is a debriefing to determine on what kind of evidence we obtained in this house.  We captured many EVPs and most of the EVPs sound like growling.  We feel there is definitely a demonic force in this house.  One EVP sounded like bubbling water and this was captured in one of the closets.  Another EVP sounded like a man saying "Be right back".  Deanna detected an old lady by the gazebo and we obtained an EVP of an old lady saying what sounded like "hello" at the gazebo.  We felt cold spots. Josh had a chain on his pants and an entity yanked on the chain.   We must have captured about 9 EVPs in this home.  On some of our equipment the batteries started draining.  Deanna envisioned blood on my wrists and hands and come to find out the family member that dabbled in Satanism would cut herself and draw blood.  Josh's temperature gauge hit "666" twice and would pause, before going to the next sequence.
EVIDENCE AND VISIONS
One of the investigators witnessed a shadow creature darting through the living room.  Julie actually took a picture of a shadow person in the backyard!  Deanna detected portals in the pantry and when I went into the pantry I obtained an EVP of tongue clicking sounds.  The little girl said sometimes she hears whispering and heavy breathing near the bathroom.  At the bathroom I captured an EVP of heavy breathing.  Deanna envisions a white rabbit paw laid out at the front door.  Later she envisions a demon dog and red candles burning.  Mary said that her red candles are missing after she learns of Deanna's red candle vision.  Deanna sees a troll that was probably summoned via a Ouija Board and she sees the troll stealing jewelry and Mary has missing jewelry. Deanna envisions imps on Mary's fence.  Deanna learns that Mary burned a Satanic box that was created by the family member and Deanna feels that when Mary burned the box, it opened up a portal for a fire demon.  Deanna sees a "monkey familiar" near the little girl.  Josh used his spirit box and when we asked the entity what his name was, it said "Beezlebub".  Come to find out the family member that dabbled in Satanism had wrote the name Beezlebub on a piece of paper.  Julie at some point of time during the investigation, came under what looked like a spiritual attack that affected her physically.  Julie had to step outside to regain her composure. 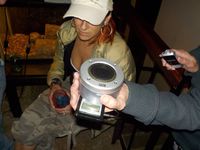 THE CLEANSING:
Deanna conducted a metaphysical cleansing of the home and I conducted a Roman Catholic House Blessing.  The family and I, all changed into swim clothes and we waited for the jacuzzi to get warm.  While we waited we watched Netflix "Tiger King".  When the jacuzzi was warm, I blessed the water and baptized Mary, Mike, their daughter and son.  Special Note:  After I conducted the Roman Catholic house blessing, the family felt attachments on their legs.  Deanna looked at me and told me I need to baptize all of them.  A full submersion baptism is a basic form of exorcism.  If this family had an attachment, the attachment will immediately leave after the baptism.  Besides the fact that the family member took notes on Satanism, this family member also had a Voodoo doll. Deanna is now in possession of the Satanic notes, the Voodoo doll and other dark items.  Deanna will dispose of them properly and binding any kind of evil with the items.  Special Note:  Thank you to this family for the coffee.  The family also has chickens and gave us some eggs.
Sign in to follow this
Followers 0