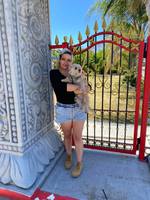 5/23/2020:  Wat Dhammararam Buddhist Temple is located at 3732 Carpenter Road, Stockton, CA   HPI Paranormal Investigators Roll Call:  Paul Dale Roberts - HPI Co-Owner;  Deanna Jaxine Stinson - Psychic Medium - HPI Co-Owner; Story - Canine Paranormal Investigator; Hannah - Canine Paranormal Investigator.
From the paranormal hotline.  Received call from Liu Min.  Liu once lived in Manteca, CA and now lives in greater Los Angeles.  In 2004, Liu visited Wat Dhammararam Buddist Temple in Stockton, Ca.  Liu was with her mother and aunt.  As she walked around the premises, she came upon a skinny man with bluish skin.  This man was wearing a yellow robe and to Liu's surprise, the man had tree branches for arms and hands.  The tree branches even had a few green leaves on them.  Liu believes until this day, that she witnessed a Yaksha nature spirit.
The man looked at Liu and darted away behind a statue.  When Liu went over to investigate, the nature spirit simply was gone, vanished.  Liu wants to know if Deanna can pick up on this nature spirit.  Liu also got me in touch with Wang Wei.
Wang Wei says he had his own experience at Wat Dhammararam Buddhist Temple.  Wang says that in 2014, he visited the temple with his brother.  Wang claims that he saw 3 monks walking down a pathway and then simply vanish. 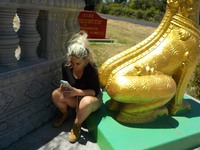 Deanna sat near one of the statues and instantly felt "cleansed".  Deanna describes it as if someone threw holy water on me.  Deanna at this time, did not detect any entities at this beautiful temple.

The Stockton Cambodian Buddhist Temple (Wat Dhammararam) is an active Buddhist temple that features over 90 colorful and larger than life jewel encrusted statues that celebrate the life and story of the Cambodian Buddha. You have to see it to believe it, the temple boasts a 50 foot long recumbent Buddha. Also home to the annual Cambodian New Year Celebration every April.  I will describe to you just 5 statues that are located at this beautiful temple.

One statue represents the birth of Buddha, which is celebrated by the Therravada Buddhist in January. Queen Maha Maya gave birth to a prince in Lumbini Park while she was on her way to see her parents. Five days after the Prince’s birth, the king asked five wise men to select a name for his son. They named him Siddhartha. This means “the one whose wishes will be fulfilled." The seven lily pads represent the seven steps that Buddha took after his birth. After seven days his mother passed away.
Another statue represents the chariot that Siddhartha used when leaving the kingdom to see the poor people outside the castle. He was 28 years old. Seeing the poor people made him very sad and he started to question his privileged life. He began to meditate and understand life. He took several short visits to the nearby towns. These experiences caused him to want to leave his current life as a royal to study with the Braham mystics.
They have a statue that shows Siddhartha leaving the castle and his luxurious life behind him so that he may study with Ascetic monks in order to discover the true meaning of life.
A beautiful statue shows the Prince stopping by at the river some distance from the city where he took off his expensive dress, pulled out a sword and cut of his hair, representing his final renunciation of his previous life. He put on the robes of a monk and began meditating. 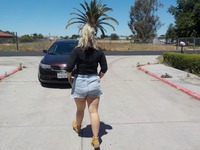 And the final statue I will tell you about is showing Siddhartha trying to become an Ascetic. He thought that if he practiced hard enough, he would become enlightened (that is, know the way and be able to overcome suffering.) But after much fasting and meditating, (about six years), Siddhartha realizes he is still suffering. Fasting and meditation has not let Siddhartha to "the true way".
Now that I described 5 statues at this gorgeous temple, you must see and learn about the other 85 statues that adorn this mystical retreat.  If this temple is haunted, it's haunted by sacred beings of light.
Sign in to follow this
Followers 0