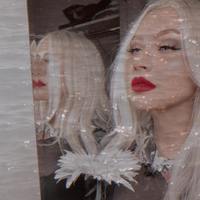 Xtina is one of the woman that may come to your mind when you think of pop stars or pop music, at least for me she is. I have always used music to cope with difficult emotions and she has plenty of songs in her collection on inspiring yourself to go harder, be stronger, love yourself and much more, such as: Fighter, Genie in a Bottle and You Are Beautiful.

She is involved with her fans and takes part in movements which contribute to one's self-esteem and self- love, like now she is doing "Diary Dares" where she is sharing things she wrote in completely honesty with others on twitter. She is frequently described with the word "hot." It could be the Sagittarius fire within her coming out and also her heart, because it is the soul which is seen overall. That is why I am making her into the Fox Goddess.

The Fox is a spiritual energy which one can invoke in desperate or hard times to overcome spiritually any obstacles. It is a reminder to be in tune with your own emotions in order to heighten your senses! The fox is a huntress and a beauty, much like many would say about Xtina!

The Inari is a fox which is a Japanese symbol for spring, prosperity and success. She is known to be tied to Disney art and for comparison here, I am looking at the title "Mulan" and the beautiful music in which she has brought our attentions to! She is displayed recently with flowers and gardens, in several scenes giving ode to Springtime.

The fox is adapted in many cultures around the world as an overall symbol of deception as well, due to it's crafty and cunning ways, but this is the shadow energy of the outlying subject, as such is a comparison to popular women who explore our senses through expression in fashion, style and overall artistry. A fox is most always compared to noble man and noble people.