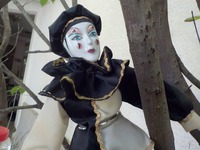 Sometime in the year 2009, HPI (Halo Paranormal Investigations) had a case in which the occupants of a home in South Land Park said that they were having all kinds of paranormal activity. The occupants lived in the house for over 15 years and never had any paranormal activity during those 15 years, except for now. The occupants said that the activity started 2 months ago and they have no idea what brought on the paranormal activity. The activity that was occurring in this house are cabinets slamming; heavy footsteps are heard; moaning sounds from the attic - the moaning sounds are male; the wife hears a man whispering in her ear and the voice says....."I will hurt you".

HPI conducted an investigation and during this investigation, I was walking down the dark hallway and felt a shoulder brush up against my shoulder, it felt like a heavy set man brushed up against me. We obtained 3 EVPs and on one EVP there was the disembodied voice of a man saying...."you will die". The occupants wanted their home blessed and I told them I will conduct a Roman Catholic house blessing when the investigation was over. I was curious and asked the male occupant if he had brought anything to the house in the last 2 months. Come to find out the occupant purchased a unique doll from an estate sale at South Land Park. The doll was a clown and the occupant affectionately called the doll "Darwin". The estate sale was due to the death of the homeowner. Neighbors said that this homeowner was known in the neighborhood as a grumpy old man. He died of a cardiac arrest. When the occupant told me this story, I had them show me "Darwin". I knew at this time, the energy of that grumpy old man is attached to Darwin and that is what is causing the paranormal activity.
ROBERT THE DOLL

Not only did I bless the house, but I also blessed Darwin with the use of holy water. The occupant told me to take Darwin, that he no longer wants to possess this doll. I took Darwin to my home. There has been no paranormal activity in my home. Whatever evil energy that was attached to this doll is now gone, because I asked for God's angels to cleanse the doll and to vanquish the evil energy that was once attached to Darwin. It's now 2020 and I am still the proud owner of Darwin and there is still no negative paranormal activity in my home.
BRAHMS THE BOY & CHUCKY
ARTWORK BY RICHARD VASSEUR 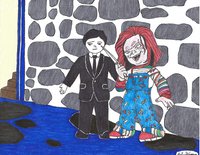 There are many cursed dolls in this world, to name a few, there are Robert; Annabelle; Letta the Doll; Okiku; Pupa; Mandy; Pulau Ubin Barbie and of course all of the cursed dolls in Mexico's Isla de las Munecas - Island of the Dead Dolls, located in the channels of Xochimilco, south of the center of Mexico City, very close to the Estadio Azteca football stadium. Energy will attach itself to any object and the more a person is connected to a particular object, the more energy will be deposited on this object and this is especially true with dolls.

This has become a great theme for horror movies as we have cursed dolls from Chucky to Brahms the Boy to Annabelle. There is something about a doll that gives people the heebie jeebies. I can tell you that Darwin will not be terrifying anyone else, he has been neutralized.