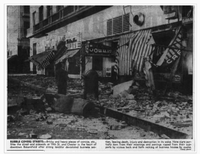 MESSAGE FROM PAUL:
The Padre Hotel in Bakersfield is very haunted.  I know, I spent a night there in which I felt a ghostly form next to my body and the whispering in my ear, by what sounded like a creepy little girl.  Whispering that I could not understand. Later in the night I had someone or something pulling on my big toe.  In the morning, I talked with a couple that also spent a night on the 6th floor and they told me they heard children running up and down the hallway.  With some research that I did, I learned that the Long Island Medium - Theresa Caputo stayed a night on the 6th floor and was tormented by a girl ghost.  You have to wonder if the girl ghost that whispered in my ear, was the very same ghost that tormented the Long Island Medium?  To get the full story of my stay at the Padre Hotel, please read the story here:  www.costaricantimes.com/haunted-padre-hotel-frankenstein-castle/67586
RESEARCH CONDUCTED BY LAURIE R. GARZA / WITH COMMENTS FROM LAURIE

This is 19th street, There was a lot of damage. The Padre was lucky.

There were a lot of floods in that area. Drownings, etc.... 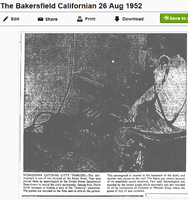 In the City of Bakersfield v. Miller, there is no mention of a previous fire.

He was a character, Failed to install a sprinkler system. After reading the descriptions, I'm shocked that there wasn't a fire!

Now the Padre was built on Brundage Holdings. I'll look further back into that history.

The biggest fire was back in July 1889

I have news articles of damage if interested. Over 200 buildings destroyed. But I was only able to find one death.

The victim was Patrick O'Donnell, burned to death in the James Hotel.

I'm going to see if I can finding any news articles during the construction of the hotel that have to do with accidents, etc...

BTW, it does seem to draw suicidal people.
Laurie

www.bakersfield.com/archives/inga-barks-teens-suicide-shouldnt-just-be-blamed-on-others/article_8f412e1d-6efb-5f3a-b3f0-f891cd4a8647.html
RESEARCH BY PAUL DALE ROBERTS AND DEANNA JAXINE STINSON
THIS IS MY EMAIL COMMENTS ON WHAT DEANNA AND I, DISCOVERED:
"I think I know where the children came from. The Yowlumne Indians that lived on the land that is now known as Bakersfield, many thousands of Yowlumne died, including children. When the little girl was whispering in my ear, I couldn't understand a word what she was saying..she may have been talking in her native language.

There was outbreaks of malaria...the slaughter of the Yowlumne and of course they were killing adults and children. Where the Padre Hotel sits..many Yowlumne tribes settled in that area.

If you google Bakersfield Wikipedia..you get some information about the floods.

Usually after a slaughter of the enemy...the enemy was thrown into a pit and set on fire.
You can see more clippings that Laurie found in regard to the Padre Hotel here:
photos.google.com/
Many Yowlumne Indians lost their life in the Tule River War, see here:
en.wikipedia.org/wiki/Tule_River_War
www.bsahighadventure.org/indian_lore/woilo.htm
Sign in to follow this
Followers 0