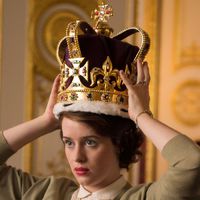 According to the online encyclopedia;

The first king known to wear a popular crown is Sneferu (r. 2625–2585 b.c.e.), and kings continued to wear them until the end of ancient Egyptian history. The crown originated in Lower Egypt in the town called Busiris and was worn by its local god named Andjety.

Much speculation has been cast over this particular king. Because his name is just a derivative of the place where he is from, it is thought that he was the one who became, Osirirs, God of the Underworld- as he was also known to have the same titles. He watches over and rules the realms which are tied to the afterlife.

His crown was meant to connect him to the Gods of the spirit realms. It was meant to depict status, nobility and perfection. Many were styled by inspiration of particular animals, such as-snakes, birds and rams. Andjety’s crown was shown with double plumes reaching high to the Heavens.

It is he who became the god of domestic and farm animals eventually, and he who was using the shepherds crook as an emblem of kingship- which in itself became the archetype for the popular Christian saying, “The Lord is my Shepard.”

The Bohemian Crown, is the oldest surviving royal crown known to have been in England, and probably dates to 1370–80. It is made of gold with diamonds, emeralds, pearls, rubies and sapphires.

Crowns of our history were precursors to modern crowns. They were known as diadems of the Achaemenid Persian emperors. The Diadem was adopted by Constantine I and was after him, worn by all the future rulers of the later Roman Empire.

Because of this, their emperors used what we call “corona radiata” – or, the radian crown- as part of the cult of “Sol Invictus” before the Roman Empire converted itself to Christianity.

The Ancient Egypt peoples used White crowns (Hedjet) for Upper Egypt, Red Crowns (Deshret) for Lower Egypt, and after the unification; what is known as a combination of those two crowns: Pschent.

The Queen of Heaven

According to the online encyclopedia;

“A circle of stars often represents unity, solidarity and harmony in flags, seals and signs, and is also seen in iconographic motifs related to the Woman of the Apocalypse as well as in Baroque allegoric art that sometimes depicts the Crown of Immortality.”

“Then I witnessed in heaven an event of great significance. I saw a woman clothed with the sun, with the moon beneath her feet, and a crown of twelve stars on her head.”

This passage is known to represent the Queen of Heaven herself. However, many different interpretations have been made on the subjects of Revelation -which require deeper review. The number twelve is known to represent time, as it eludes to the hours in a day and months in the year. Together, in it's wholeness it also equals the divine trinity, or the phases of life.

Many saints, angels and Gods are known to be represented with lights above their heads and halo crowns. It is meant to display their close connection with the universe and God, the ultimate creator himself- the source of life, death and resurrection. 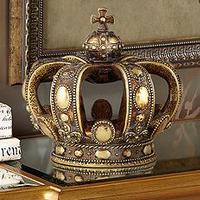 According to the online Encyclopedia;

“The Five Crowns, also known as the Five Heavenly Crowns, is a concept in Christian theology that pertains to various biblical references to the righteous's eventual reception of a crown after the Last Judgment. Proponents of this concept interpret these passages as specifying five separate crowns, these being the Crown of Life; the Incorruptible Crown; the Crown of Righteousness; the Crown of Glory; and the Crown of Exultation."

In the Greek language, stephanos (στέφανος) is the word for crown and is translated as such in the Bible, especially in versions descending from the King James Version. (Also, the meaning of my last name as well- Stinson.) These five rewards can be earned by believers, according to the New Testament, as "rewards for faithfulness in this life".

The Crown of Immortality is known as a literary and religious metaphor, which is usually shown as a laurel wreath and also as a symbolic circle of stars (often a crown, tiara, halo or aureola). The Crown appears in a number of Baroque iconographic and allegoric works of art- made to indicate the wearer's immortality through vision and storytelling.

In ancient Egypt, the crown of justification was a wreath placed on the deceased to represent victory over death in the afterlife, in remembrance of the noble god Osiris. It was made of various materials including laurel, palm, feathers, papyrus, roses, or rare & divine metals, with numerous examples represented on the Fayum mummy portraits of the Roman Imperial period.

In ancient Greece, a wreath of laurel or olive was awarded to victorious athletes and later poets. Among the Romans, generals celebrating a formal triumph wore a laurel wreath- (an honor that during the Empire was restricted to the Imperial family.) The placing of the wreath is a sign of immortality in the form of enduring fame and regal deeds. Funerary wreaths of gold leaf are associated with initiates into mystery religions. 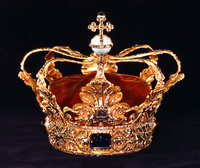 An Enchanting Encyclopedia On Crowns

A crown is overall a piece of the finest luxuries available at the time, meant to compliment someone who has made stride to not only be honored by their culture, but also to be recognized by the God’s themselves. This is a great feat because the Gods are known to live forever and know in their being many different hearts and souls, so to be favored by even them is a celebration of evolution and grace.

Perhaps the most timeless crown in legend to date, which affects our spiritual histories is that of Jesus, who was made to wear a crown of thorns in order to mock the authority of God and display power and disruption. The crown, which drew blood and caused suffering instead of pleasure- was made of the lowest materials on Earth because it is known that what is considered great to the spiritual world is the rejection of material pursuits and to deny living for the kingdom of Earth and all its devilish riches.

While each of us symbolically “crown” as we birth into the world, with the new air of this realm for our lungs, we know that they are very significant to our spiritual lessons and pilgrimage in this life. What is the purpose of adventure and time, if not for the reasons we lived, which can be easily told through the truth of the jewelry we wear on our heads and everywhere else instead of the words we have said?