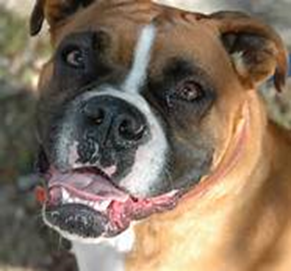 Blitz was our boxer, a smart dog, manipulative like dogs can be. You know wagging his stubby tail so hard that you would think that his butt would dislocate or worse. His eyes, those sad, poor me eyes, begging (well demanding) that we bow down to his wants and needs and then condescending to lick our hands, when in fact, we both knew who was in charge.

In 1975 when I was making a home visit and my parents lived at Fr. Davis; I got reacquainted with our dog. I guess he was about 10 years old at the time. I discovered that Blitz had his own chair, and if I sat in it, he would place himself in front of me and look at me in a way that would shame an atheist into believing in God. He would always win. I would end up getting out of his way and he would ascend his throne.

He had good long term memory as well. On the drive from Fr. Davis to Gulick or Margarita, there was a Vet that we used to take care of Blitz, and he disliked going there as much as I don’t like going to the dentist. Well, it was worse for him I believe. So on days when he got the better of me, I would slow down just a bit as we passed the Vets office and he would start to get really agitated and looking for a window to jump out of. I for instance don’t try to jump out of the car when I am going to the dentist; of course, I am doing the driving….it would be embarrassing to do such a thing. In any case, I always felt guilty about these little acts of revenge and would speed up. He would give me one of his looks that seemed to say: “you just wait human scum”, or something like that. We got long fine I believe. I am sure he was glad when I left from my home visit back up to Atlanta.

He liked to play games with my mom in his later years. Mom would stay up late and read. So Blitz would sit in front of her with an expectant look and my mother would move the book a tad to the left to block him out. Then he would scoot just a smidgen to the left so mom could see him. So it went, she would move the book, he would move an inch at a time, then back to the right and to the left three or four times; just about every night. So mom would finally get up and let him out. Ten minutes later he would scratch the door and she let him in. Then, very soon the game would start over again. I think Blitz was jealous of the books that my mom read. Mom loved the game and would laugh when she told me about it…. she loved the mutt very much as did everyone and in my weaker moments, I did as well. He was family, treated as if he were human; our little spats would seem to bring that out pretty much, we fought like I used to do with my brothers back in the day….way back.

He just went off and died one day, into the jungle I guess, animals do that. Mom never got another dog again; I believe it was like a child dying for her. She never showed a lot of emotion, but when she told me that no other dog would be owned by her, I knew that she took the loss very hard. Many people don’t understand the depth of love that can happen between those who have pets, nor the love that is returned. I am not a pet person, at least not for dogs and cats, but I do know that the bond is deep and intense and for the most part healthy for those who have them.

There are days when I am reading in my room, when my imagination goes wild, that I sense Blitz sitting in front of me, daring me to notice him….so perhaps my bond with him is stronger than I understand. I am my mother’s son, so most likely I put my emotions deep, in a trunk, that one day may be opened…..hmm wonder what that day will be like? There are other dogs that I think about from time to time, lost in the long history of my life, I guess I loved them as well, for why else would I think of them and yes, from time to time, they join Blitz daring me to notice them…, my, the room gets crowded. I have too much imagination for my own good I believe, but ya know, would not want to lose any of it.-Br.MD