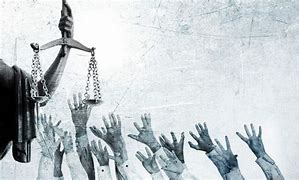 The Virtue of Justice
Let us be renewed by God's mercy ... and let us become agents of this mercy, channels through which God can water the earth, protect all creation and make justice and peace flourish: Pope Francis
++++++++++
The desire for justice is interesting. In nature, there is no such thing as justice, or fairness, or even right and wrong. Only humans have an understanding of the concept. Though seldom achieved to everyone's liking.
The idea of “an eye for an eye”, is not really based on justice, but on balance, seeking to placate the one wronged, which seldom works. Revenge often comes into play for those who have been hurt by the loss of a loved one because of a heinous crime they committed, because they know the offender and loved him or her. Perhaps they see deeper and believe that some sort of mercy should have been bestowed. Yet violence can be perpetuated, it is a blood-debt (blood for blood), that many feel has to be repaid.
I know in my own life when I forget how mercy has been bestowed on me by another, freely, and undeserving, I can become vengeful, at least in my thoughts. Mercy often sees deeper than the act, having empathy for the forces at work, so mercy is the natural outcome of the soul who is graced with true justice.
I do believe that we are still a very primitive species. At least that is how I experience myself. I know what it means to be more human and loving, yet I often miss the mark, which is what sin is.
I fail continually, I sin as the saying goes seven times a day, or perhaps more. Yet it is grace, a true act of mercy on God’s part that calls all of us to begin yet again, to not give up hope, and move forward.
Contempt for another is the first step towards physical violence. Take away anyone’s humanity and they become fair game…..a horrifying thought.
I seek to follow the Golden Rule, yet often fail because I can be asleep, unmindful of my state. In my failure, I wake up again to the struggle. I will never give up, God’s grace keeps picking me up, yes, yet again, and again, and again.—Br.MD
Sign in to follow this
Followers 0