Join the Unexplained Mysteries community today! It's free and setting up an account only takes a moment.
- Sign In or Create Account -
A Strange Haunting in Folsom
Paul Dale Roberts, HPI's Esoteric Detective
Halo Paranormal Investigations
www.cryptic916.com/
Sacramento Paranormal Help
www.facebook.com/HaloParanormalInvestigations/
Email: jazmaonline@gmail.com
Sacramento Paranormal Haunted Hotline: 916 203 7503
The drawing below was created by Thomas Ahearn.  The drawing depicts The Trio which consists of Hoppy, The Demon Warrior aka Paul Dale Roberts flying his F-80 and Wishfire aka Deanna Jaxine Stinson flying towards the Sydney Opera House in Sydney, Australia.  The Trio plans to conduct a paranormal investigation in Sydney. 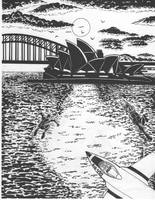 I have always been a curious creature. I joined the Ordo Rosae Crucis (AMORC) aka the Rosicrucians to better understand secret societies. When I was going to college, I did a book report on cults like the Hare Krishna, Peoples' Temple, Church of Scientology and even the Church of Satan, by actually visiting these cults and talking with the members of these cults. Of course, I got an A in Sociology for actually doing my own personal investigations of these cults. The funny thing is that the Church of Scientology and the Church of Satan actually asked me to leave, because I was counteracting everything they were saying and it angered them. As a ghost writer and paranormal investigator for H.P.I. (Haunted and Paranormal Investigations) of Northern California. I want to better understand ghosts, spirits, poltergeist activity, demons, residual hauntings. How can I do this? Easy, by learning firsthand though a professional outfit like HPI.
I also sit and wonder on the existence of ghosts. Do they have jobs like living people? Do they know of the existence of God? I came up with my own theories on life after death. Here's my theory. When a person dies, they are confronted by the light. They are beckoned by deceased family and friends who try to entice them to go into the light. When they refuse, they remain on Earth. It appears that most ghosts are confined to a home, to a place that they are familiar with or even to a graveyard. Why? Perhaps in the afterlife, they have 'ghost police'. A governing force of spirits that keep them entrapped in one area, until they are ready to go into the light and reach a energy plane with other spirits. An energy plane that may be known as heaven or even hell. Perhaps some spirits or ghosts don't want to enter the light, because they are afraid that they may go into a place of damnation. A place that we learned from the preachers of our churches that talk of fire and brimstone and a lake of fire. Let's talk about demons for a minute. Now demons are completely different from ghosts. Demons that were formerly angels, have more powers than your average day ghost and can manifest any part of the world in a blink of an eye. No one seems capable of controlling demons, unless an exorcism takes place and perhaps then angels will keep the demon at bay and chase the demon away. Residual Hauntings? With residual hauntings, an intense event took place. Perhaps a murder, perhaps a rape, perhaps even a very important speech that was given to some very important people. Because of these events, a lot of untapped energy was released from the people that participated in this event. So much energy, that it left an imprint in the atmosphere and like a recorder, it plays back the event over and over again. We at times can see these events take place in a ghostly realm, but we are unable to communicate with the ghosts of this event, because they are unaware of their surroundings, they are mere holographic images in the fabric of space and time, repeating an event over and over again. How about reincarnation? Is the person with the past life memories really that person of the past? I doubt it, but perhaps they are very much in tune with the energy of a deceased person and are able to see the life of that deceased person and even contain their memories. Causing the person who thinks they were reincarnated to think that they were once that person. A reincarnated person is actually a person that is very sensitive in picking up the memories of a deceased person and living with those past memories. What is the poltergeist phenomenon? When a child, usually a young girl is going through puberty, her body is changing inside and she is able to release energy that is so intense, that it can cause knocking or rapping sounds, cabinets to pop open, glasses to fall and break. All of us have a lot of energy within our bodies and sometimes that energy can be so powerful, it can cause disturbances in a home. Remember...we can move mountains with our mind, if we knew how to utilize our full mind power, we only utilize a small portion of our minds. Walter B. Gibson, the author of the 30s / 40s pulp hero The Shadow thought of his creation so much that the guests of his home would actually see The Shadow lurking around his house! Now that was a powerful mind!

On this Friday night, May 4, 2007, I joined fellow H.P.I. (Haunted and Paranormal Investigations) of Northern California paranormal investigator Cherie Vincent. We went to St. John Baptist Church Cemetery in Folsom, California. Cherie amazingly picks up many EVPs from this cemetery. Using a video camera, we picked up some dancing orbs over graves. At one time I asked to have my ponytail pulled. That didn't happen, but I did feel a light brushing across my leg, this occurred about 4 times. Cherie felt a slight tugging on her hair. The EVPs that we picked up were the following:
Cherie: Where are you? EVP male voice: I'm above the trees.
Paul: Is there life elsewhere? EVP male voice: Maybe.
Cherie tells me in a whisper, when we were about to leave the cemetery: Let's go. EVP male voice: I can read your mind.

I have been to this cemetery with Cherie before during the day and we had more EVPs during the day, than we did at night. In fact during the day, when I asked to be touched, I felt a burning sensation on my leg, that bled, then bruised. The bruise looked later like a thumb print. Before we left, Cherie thought she heard someone call her name and asked if it was me that called her name. I told her 'no', I was on the other side of the cemetery when she heard her name called. 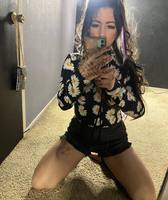 During stakeouts for ghosts, things can get extremely boring, so I bring along some good reading material and share it with the other ghost hunters. My favorite books for ghost hunt stakeouts are: After Dark - A Collection of Horror by horror novelist Jeani Rector. The Key of it All - An Encyclopedic Guide to the Sacred Languages & Magickal Systems of the World - Book Two: The Western Mysteries and of course the very first book...Book One: The Eastern Mysteries by David Allen Hulse. David was the influence to Sandman comic book creator Neil Gaiman and Carlos Santana has been known to read his books! Other books that I find fascinating for ghost hunts are: Arnis Self-Defense - Stick, Blade, and Empty-Hand Combat - Techniques of the Philippines and Comprehensive Self-Defense by Jose G. Paman. It's important to have some good reading material when you go on ghost hunts, because the stakeouts can be long, tedious and boring, but the final results can be very exciting! Happy ghost hunting to everyone with a strong interest into the unknown!