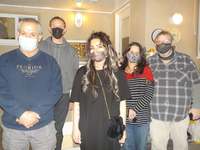 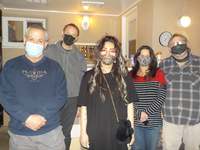 THE INVESTIGATION:
Obtained all kinds of evidence.  In the beginning, we were not able to get any EVPs.  Deanna spotted a little boy ghost by the front door, with black hair, blue overalls, plaid type of hat.  He appeared to be 9 years old.  Deanna found an area of the house that faces the backyard, that may have been a portal for other ghosts to come in and out.  We conducted 2 walk through investigations.  Deanna detected a female spirit in the backyard and we captured an unintelligible female voice EVP.  We captured a male voice that said..."I am here".  Greg showed facial recognition on his smart phone, but there was nothing around that could be seen with the visible eye.  Big Al captured a strange orb light anomaly in the bedroom.  We could not show intelligent movement for this orb, so it could be dust or a type of light refraction.  Valerie continued taking lots of pictures, to see if there were any anomalies in her photos and there wasn't.  We captured about 5 EVPs and the best EVPs are presented in the video.  We feel that there is one malicious entity (maybe not a demon) and some regular hang around ghosts.
THE CLEANSING:
Deanna conducted a metaphysical cleansing and I conducted a Roman Catholic house blessing.  I also did a spiritual blessing on Mrs. SV that may have an attachment. She at times feels pressure on her back that she thinks could be the malicious entity doing this.  I blessed Mrs. SV with holy water. I thank the occupants for the donation and coffee.  We left cleansing material at the residence.  Mr. R says that after the cleansing, things felt lighter.  After the cleansing and debriefing, everyone gave each other hugs for a spectacular investigation.  Another case closed.  Valerie made sure I did not forget the portal and had me clear it.
TO OTHER NEWS/THE WISHBONE UFO:
Deanna Jaxine Stinson while jogging from Zimbleman Park to Pinkerton Park today on 2/27/2021 at 12:49pm, saw a UFO in the sky, in the shape of a wishbone.  She calls it the Wishbone UFO.  The UFO glowed white and hovered on a windy day, and then ascended slowly in a direct path.  The sighting lasted for 15 minutes.  You can barely see it in this picture, but it was clear as day with the naked eye. 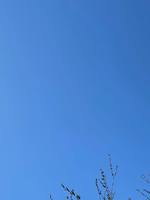 This UFO was reported to MUFON. Case #113878. Here is some video footage that she collected from the sighting:
www.facebook.com/HaloParanormalInvestigations/videos/3818169868310471
THE BEST VIDEO FOOTAGE OF THE WISHBONE UFO