Join the Unexplained Mysteries community today! It's free and setting up an account only takes a moment.
- Sign In or Create Account -
The I-5 Killer - The Gallegos - Ng & Lake: The Haunting Paths of 5 Serial Killers
Paul Dale Roberts, HPI's Esoteric Detective
Halo Paranormal Investigations
www.cryptic916.com/
Sacramento Paranormal Help
www.facebook.com/HaloParanormalInvestigations/
Email: jazmaonline@gmail.com
Sacramento Paranormal Haunted Hotline: 916 203 7503
The drawing below is a crossover drawing of: Supergirl, The Black Rose aka Deanna Jaxine Stinson and Garth Ennis' Jennifer Blood. Black Rose has the powers to control plants and has the ability of shooting lightning bolts from her eyes. Artwork by Richard Vasseur. 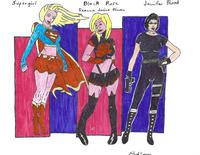 Since I have been writing ghost stories and leaving my infamous paranormal cellular phone number on my articles. I get some surprising calls. I received one call and I would consider it to be normal. A young lady named Jenny Swarts (Cohn) explained to me that she is a Numerologist and that she has a couple of ghost stories that she would like to share with me, if I could meet her at Border's Books. First off, Jenny was excited to take my birthdate and analyze my numbers. When I told her my birthdate, she told me that my number is 2911. 11 means I have high positive energy. 2 is my cooperation and balance. She says that I don't over cooperate and I don't under cooperate. She went on to say, that if I am pushed and it doesn't agree with me, I can become very uncooperative. Hmmm...me? 9 was universal, which included integrity and wisdom. After she read a few of my ghost stories, she said with an 11, she can understand why I have this high energy and passion to write ghost stories, that I have become prolific with my writings. She told me I have well-defined boundaries. She explained to me that she is a follower of Eastern philosophies, such as Hinduism, Tao and Buddhism. I told her about my author friend, David Allen Hulse who wrote the book Eastern Mysteries, that Carlos Santana retreated to an island to read and how Neil Gaiman used some of Hulse's ideas for his Sandman comic book series. After Jenny explained to me about my number 2911, we talked about her. She related a very personal ghost story, that I cannot disclose in this article. She felt compelled to share this heartwarming ghost story with me, I listened attentively. Then she told me another ghost story about a time when she was in Ashland, Oregon. She was walking into the field late at night and noticed these strange bluish purple lights in the field. As she watched the lights, she noticed that they were in the shape of small animals like squirrels and rabbits. She came to realize that she was actually watching the ghostly spirits of animals! Now here is the clincher, she wanted me to remember this. She told me that she had a vivid vision, she saw Pope Benedict XVI assassinated in front of a crowd of people, with his arms raised! I was somewhat stunned, because if this Pope is assassinated and the next Pope takes on the name of 'Peter', this would be the last Pope in the long succession of popes. This would be known as the 'end of times', which would harbor close to the Mayan prophesy of the Age of the Jaguar, the fifth and final sun for the final days, which will land on December 21, 2012! Jenny looked at me with sincerity and said..."Paul, please remember what I am telling you, I saw the Pope assassinated in my vision!"

I drove away a bit shakened. If her prophesy is correct, you heard it first in this article. When you delve into the paranormal, you meet all types of people that touch the boundaries of the paranormal and Jenny is one of those people. I hope her prediction is incorrect. We will have to wait and see. I needed to get home and contact some of my core group members, who have been doing some research for me. The research may lead us into another paranormal investigation. An investigation of ghoulish proportions.

I checked in first with Chris Grissom, Paranormal Investigator. I wanted to see what Chris dug up on serial killers Charles Chi-Tat Ng and Leonard Lake. Chris relates to me that Leonard Lake was a survivalist, that his ranch was located at Wilseyville in Calaveras County. Charles Ng and Leonard Lake were responsible for 25 murders, possibly more. Leonard had the idea of 'Operation Miranda', the gathering of sex slaves in his bunker. The bunker according to Chris was created to survive a nuclear holocaust. Leonard believed that collecting sex slaves, he and Charles could repopulate the world. Charles and Leonard took the collecting of sex slaves into a whole other dimension, they started video taping their bound victims during the rape, torture and murder of each victim. Leonard when cornered by lawmen, took his own life with a cyanide pill. Charles went up to Canada and killed 8 more people. When law enforcement extradited him back to the US, he bragged to inmates that he once killed a Marine during his time in the Corp. Charles remains in prison.

Next on the team, I contacted was Jennifer Baca, Paranormal Investigator. Her assignment was to get information on Gerald and Charlene Williams Gallego. Jennifer discovered the Gerald attended Sacramento High School. Charlene appeared to have a sweet and pleasant personality and she would approach young women and ask them if they would like to make money delivering leaflets. As the young girls approached the van that her husband Gerald was in, they were kidnapped and thrown into the van. While Charlene drove, her husband Gerald would rape, torture and murder the girls in the van. One of the places Charlene lured a girl to the van was at Sunrise Mall in Citrus Heights. Orb activity at Sunrise Mall was detected with the use of a digital camera on March 14, 2007 at 2:00 a.m. by Raquel Nunez, amateur paranormal investigator, with no affiliations. This does not indicate that the orb activity is related to the Gallegos murder, nor does it mean it's paranormal activity. But, it's something that can be looked into. I will explain later in this article, how I obtained this orb activity information....yes, keep reading.

Michele Stump, Researcher and Paranormal Investigator related a slew of information in regard to all of the serial murderers mentioned in the beginning of this article and others I have never even heard of. Michele is a crime buff and has read countless books on various killers throughout the history of mankind. She is a wealth of information when it comes to the crimes of murder. Michele discusses Randall Brent Woodfield aka I-5 Killer or I-5 Bandit. She tells me that Randall committed about 13 murders along the I-5 corridor stretching from Washington to California. What is interesting, according to Michele is the fact that if Randall wasn't a serial killer, he may have been a successful football player, because he was once drafted into the Green Bay Packers. He was extremely handsome and once posed for Playgirl Magazine. 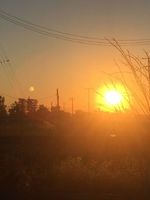 Now here is when things get even more interesting. Like I said before, since I do write numerous ghost stories, I get contacted by a variety of people that have interests in the paranormal. Enter: Joseph Anthony Soyo. In one of my articles, I talk about the I-5 Killer, Charles Ng and Gallego and that we might do a possible investigation into this matter. Here is what Joseph emailed me. (Editing of his email done by me).

"Hi Paul. My name is Joseph Anthony Soyo, you can call me 'Joe'. I love the paranormal. I have been interested since the age of 14. I enjoyed reading your ------- House article. I'm going to have to check that out! I noticed you mentioned you might do an investigation on Charles Ng, I-5 Killer and Gallego. Here is something I know, that I would like to relate to you. My friend Raquel Nunez took some cool orb shots at Sunrise Mall, I believe Gallego killed one of his victims there. (I later get the date and facts about Raquel's orb shots). If you ever go to Humbolt Sink, this is where Gerald and his wife took two girls into an isolated area, hit them over the head with a shovel and buried them. I have got some very cool orb shots over there and have heard from locales that there is some residual haunting activity in this area. They said the I-5 Killer took one of his victims and killed her at Sutterville and I-5 near the Sacramento River embankment. If you go there late at night, you are definitely going to get some cool orb shots! I once got a misty white shot near a tree, the place is spooky as all hell! I'm pretty sure, that the I-5 Killer's victim is haunting this area! As for residual haunting activity at Lake's Ranch, if you can locate this place, I wouldn't mind checking it out, that place has got to be haunted!! How many did he kill, like 35? Paul, keep on writing dude, maybe I will show you some magic tricks, Criss Angel is my idol and I am a pretty good magician. So, I have been told. Talk to you later. Joe"

It now appears that HPI is closing in towards areas that can truly be investigated. Stay tuned, to see what HPI discovers in the near future at the locations Joe mentioned. Thank you Joe, for your enlightening information! This really helps!
Sign in to follow this
Followers 0