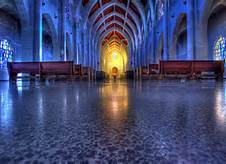 All is well here at the Monastery. It is hard to believe we have had this virus with us for almost a year now. The time has just flown by, yet it also seems to me that this virus has been with us forever. I find it strange how it can feel like both things at once.

We all received the first vaccines on the 11th of January, and the second on the 12th of February. A couple of us did have some side effects. I for one, was pretty sick. I had a headache, my whole body ached, and I could not sleep for two nights. One other monk, about my age (I am 72), had the same outcome. After three days we were both back to normal. Not one of the monks in their 90’s had any kind of reaction at all, which was a relief. So I feel that the vaccines were well worth taking. Hopefully later this year we will be able to open up to the public. Even then, I would think we will still be advised to take some precautions.

Well, Lent is upon us. This year is different because for many of us, perhaps all, the whole year has been one long Lent. Hopefully many have learned how to handle solitude better, as well as experiencing a deepening of their relationship with God, in Christ Jesus. It is true we are being constrained to step back from many activities that we took for granted in the past.

To embrace life, with all of its many different manifestation, is not being passive, but learning how to keep one’s center, one’s rootedness in the face of factors that would like to sweep us away. The anxiety and fear, though not often felt, is still there. It is a deep underground stream that from time to time will burst to the surface and let us know that it is still present.

What is important is how we deal with it.

Trust is a choice, an act of the will, even in the midst of deep interior suffering. Perhaps this Lent we can pray over the reality of how little control we actually have, and allow that to make us more conscious of how precious our lives are. Take nothing for granted. Learn to be thankful for everything.

So dear friends, never lose sight of the hope that we are all called to. May Christ enfold you in his loving presence, and even when you feel alone, know that His love for you is the only constant that exists. Yes, God’s love and care are constant. He does not pamper us and that is what can lead to difficulties. Christ Jesus learned through obedience, and so do we. The only way to learn of the freedom that obedience to God’s will gives is to do it in the midst of our daily, often chaotic lives.

So let us continue to pray for one another, and to seek peace with all those we come in contact. As well as to speak in gentleness and love when we need to express truth. Also for the humility to listen when it is our turn to allow others to minister to us by speaking truth. Br.MD

Brother Elias Marechal was born July 11, 1936 in New Orleans, Louisiana. He Entered the Monastery in 1996, and made his final Profession 2001. He is the author of two books: Dancing Madly Backwards: A Journey Into God (Crossroad Publishing, 1982) and Tears of an Innocent God: Conversations on Silence, Kindness and Prayer (Paulist Press, 2015).
Br. Elias has had many jobs here at the monastery over the years. He has been Vocations Director and Novice Director, has given many Retreats here in our Retreat House and has been a Member of the Abbot's Council. He is also known to be a wonderful Spiritual Director. Br. Elias is a gentle kind person, with a ready smile and as the employees in the Retreat House can attest “he gives the best hugs ever!” We are blessed to have him as part of our community.
+++++++++++++++++++++

I was sitting in the woods yesterday, on a large concrete slab. Ahead of me stretched a path heading back to the main monastery building. The path is narrow and is bordered with old pieces of concrete that were discarded when the church was being built. There are interesting designs on some of the pieces. The pieces have long settled into the earth and they have been well worn by the weather. They “fit” very well just where they are. They look good, too. Some of the pieces have bits of moss on them. If I was an artist I would draw a picture of them. It is nice to have beauty right at one’s feet, beauty made from long ago discarded things.

It was a beautiful day and I sat there looking about me. Trees and shrubs stretched before me as far as I could see. It was late afternoon. I had seen “The Passion” earlier in the day. I went with another monk. I came back and wanted to sit and think for a while and so I headed into the woods. I was thinking about the film, and some other things, as I sat there. I find it hard to get a clear focus on many things these days. These are worrisome times. Earlier I had read a report about the rapid diminishment of plant and animal species. That report was nestled among other newspaper stories: murders, news of the war in Iraq, terrorist coverage, the pain of the Spanish people, the tragic situation in Haiti, anti-war demonstrations in Great Britain and Australia and the assassination attempt on the life of the president of Taiwan.
“The Passion” is a brutally violent film. Gibson leaves very little to the audience’s imagination in his depiction of the suffering and death of Jesus. I am not a movie critic or movie “buff.” I have not seen that many films over the years. I found it difficult to emote with the characters in the movie, to get a real feeling for them. I do not know why that is. Maybe I just do not relate all that well to the media of film. I winced at the bloody, violent scenes and yet was aware that as I did so I was reacting much the same way I would if I saw a car crash or a stabbing. There is a brief resurrection scene at the end of the film. And, yes, I believe that is the way it was.

I sat there thinking about the film and looking about me. It is spring and the air is filled with seeds, with pollen. I cannot see it, but know it is there. It fascinates me, the amount of growth that takes place every year at this time. Something as tiny and simple as a seed rides the wind, absorbs needed sustenance for its life from the sun, rain, temperature and eventually may grow into something large and beautiful. And there are billions, maybe trillions, of such seeds. I do not know why God is so lavish with his gift of potential.

My thoughts turned back to the film. It has made quite an impact on the cinematically informed conscience of many people. It has created controversy and aroused passion. It has been promoted by many churches. As one of the monks said, “It will hopefully do more good than not.” I hope so.

Today is the first day of spring. I did not know that when I woke up this morning. A friend just mentioned it to me. Is your area teeming with growth? I hope so. I hope you can see it and smell it and wonder in awe about it. It is a “given.” God sends good things to us here below. Seeds of all kinds promise abundant growth.

The life of Jesus was brief and because of a deranged hatred of goodness his life ended brutally, but the seed of God passed through him. That seed will find its place in the earth and will rise. As dark as history may get – and humanity may well be in for darker times than our own – something good and holy is moving through the winds, through human hearts, through every imperfect and flawed atom that is the created order. I see some early signs of it: simple acts of kindness, utterances of hope, acts of sacrifice, forgiveness, love, and generosity. These grow right alongside and somehow even through the horrors of every-day news stories. The passion of Jesus is and was suffering and love. I hope people who see the movie realize that the message of Jesus took flesh in the latter. It is that hope people can take home with them after the house lights come on. It is a hope they can practice and live in the smallness of their lives: lives that are like seeds given in abundance from above, awaiting the growth that love alone can give. ++James Stephen Behrens, O.C.S.O, March 20, 2004