When I went to Zigato's Bar & Grille, there was a patron dressed as Super Chicken outside of the parking lot.  Remembering that, it inspired me to draw Super Chicken with some other colorful characters.  Below is a drawing I did of Super Chicken, Spider-Man, Tom Slick, Touche Turtle hiding in a tree and spying on Spider-Man's arch nemesis Doctor Octopus. 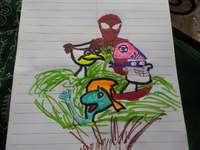 The below article is a blast from the past.  The year 2008.
When ghost hunters work hard, they also play hard. New Year's Eve 2008 is upon us. Why not do some partying before the big night? After work I picked up Shannon McCabe, President of HPI and Tim Hawkins, Lead Investigator and headed out to Clarion Hotel - 2600 Auburn Blvd in Sacramento, where Zigato's Bar & Grille is located. Before it was playtime, I interviewed the Zigato's waitresses, Rachelle Denise Silva and Stephanie Sanders. Rachelle tells me an interesting story about when Zigato's Bar & Grille was located at 1910 Canterbury Road. The story that Rachelle tells me is confirmed by Stephanie Sanders.


When they were located at the old building, they would hear what they would call 'weird noises'. They would hear scratching sounds, or the sounds of people in the other room when there were no people in the other room. Some nights they would hear the sounds of scuffling feet as if people were partying. Another time, they heard furniture being moved. Rachelle said that this is the second paranormal experience she had in her life, the first experience was at her mother's place in Sonora. She would hear ghostly footsteps walking upstairs and at times the lights would turn on or off by themselves.

As I finished my interview with the waitresses, I surveyed the festive crowd and could spot out Holly DeLaughter, Chris Grissom and Donna Reynolds. Tim Hawkins jumped up and started doing karaoke to Rock Lobster by the B52s and Bad, Bad Leroy Brown by Jim Croce. The owner did a dedication to HPI by belting out the song Ghostbusters by Ray Parker Jr., and everyone in the house when hearing "who you going to call?" were yelling at the top-of-their-lungs "ghostbusters!"

Donna Reynolds got brave and went up and sang Old Man by Neil Young. Shannon McCabe being a professional singer sang Sex & Candy by Marcy Playground, Bohemian Rhapsody by Queen. She did a duet, with some patron, to Unforgettable by Nat King Cole/Natalie Cole and then she blew the crowd away with another duet with Zigato's owner, Steve, as she did a baby girl voice to 'Baby, it's Cold Outside'. The audience went wild, Shannon even did a cute little dance on stage and the duet was flawless! Bravo Shannon! 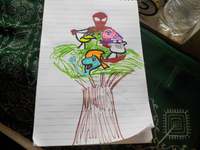 There were some inside jokes as the DJ for the Karaoke was named Shannon L. Harding. Shannon Harding and Shannon McCabe have been friends for a long time and have distinguished themselves as Shannon #1 and Shannon #2. They both wanted to be Shannon 1, but someone had to be #2. I was so confused....

Okay, now it was my turn to do a couple of songs up there, but before I did, I interviewed Shannon L. Harding and she told me that when she was 8 years old, she lived in this home that was haunted by an old man that once lived upstairs. When he passed away, there was paranormal activity that started in her home. The house door would be locked and would mysteriously open by itself. Every night that Shannon Harding would go home, she felt like the old man was watching her. She told me that this home was in Nashville, Tennessee. She said the one thing that she will never forget, and it haunts her to this day, is seeing the black silhouette of the old man. Shannon Harding is a definite believer of the paranormal!

As Holly and I, took pictures of this fun event, we noticed that in some of the pictures we were getting orb shots. Did the ghosts of Zigato's last location follow the employees to the new location? Hmmm...a very interesting question. I have noticed that haunted locations near power lines have stronger paranormal activity. I went outside to see if there were any power lines around, there were none. I recently read that a haunted home with slight paranormal activity had more activity when the home became equipped with an electric power generator. Whenever the generator was on, the paranormal activity increased ten-fold. Perhaps we need to take generators to haunted locations and turn them on, to see if the entities will feed off the energy that is produced by a generator. I can see it now, HPI brings their ghost hunting equipment such as an EMF Reader, electronic digital audio recorders, digital cameras, infrared cameras, temp guns, thermal imaging cameras, and an electric power generator. I guess bringing a generator, would be one way to kick start an investigation!

Finally it was my turn to go up stage and I sang 'Living in America by James Brown' and 'Devil went down to Georgia by the Charlie Daniels Band'. I threw in some crazy dance moves and the audience was bewildered and dumbfounded. Later, I took Shannon on the dance floor and dipped her here and there and got her dizzy spinning her around during our swing dancing. So much so, that her dress almost flew off. Did I mention I am the Disco King of Sacramento?

The night ended quickly, before we knew it, it was last call for alcohol. The few remaining HPI members did some brainstorming and discussed doing a spoof on the movie '1408' and calling it '1407'. That is one thing with HPI, we are always planning new and fun things to do for the future. As we headed out to our cars, I mocked Shannon's song and sang "Baby, It's freakin' cold outside" and Shannon would sing back "Paul, you're a dork all the time" and I would come back "Shannon, you need to shut your yap all the time". Yeah we had a crazy, crazy night!
Below is the Demon Warrior aka Paul Dale Roberts 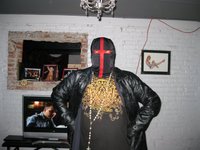 As I drove Shannon and Tim home......yeah, they talked me into being the designated driver, I made sure we stopped at the supposed haunted home on 22nd and H Street to see if we could see any unusual activity, but on this night the house was quiet. So, quiet, that I had to get the noise level back up in my car called 'Ghost Tracker', I looked at Shannon and Tim and said..."I have a treat for you both!" That treat was playing 'Milkshake' by Kelis and 1-2-3-4 (Sumpin' New) by Coolio on their way home. Shannon looks at Tim and says "Paul, sure plays some off-the-wall songs!" Tim: "He sure does."

Shannon's Comments: We didn't find any ghosts, but we resurrected some old moldy karaoke tunes!