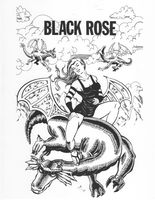 The drawing above is the Black Rose - Mother of Dragons aka Deanna Jaxine Stinson aka Heartly Roberts. Art by the magnificent Thomas Ahearn. Black Rose has control of 3 fire breathing dragons. She can make a black rose thorny vine appear. She can make that vine capture a bad guy and constrict around his body. She can fly and she has incredible strength.  Deanna is fascinated with dragons and you can see the REAL Black Rose at the pictures below.
Dragons have been around since the dawn of mankind. Do I believe in dragons?  My answer....yes, I do.  I think dragons can be a combination of things.  Dragons are mentioned in stories from various countries and cultures.  Some stories talk of dragons being serpentine, or snake like.  Other dragons have wings and can breathe out fire.  There are stories of heroes like Saint George who supposingly slayed a dragon.  I always wondered if dragons could have been the last surviving dinosaurs living with man?  There seems to be some truth to that.  We will discuss that when we get to the Paluxy River.  I also wonder if various sea serpents, lake monsters could have been mistaken for dragons, like the Loch Ness Monster or Ogopogo?   Let's look at some candidates for the dragon.
*snip*
THUNDERBIRD
The Thunderbird definitely falls into the realm of the paranormal.  The Native American people consider the Thunderbird as a supernatural being.  It is a symbol of power and strength.  Some people say that if you see a Thunderbird, you will fall upon good fortune or you will fall upon bad luck.  It depends if the Thunderbird is good or evil.   In 1890, six gunslingers from Tombstone, Arizona went after the Tombstone Thunderbird.  The Tombstone Thunderbird was seen near cattle in Tombstone.  Thunderbirds were known to bring rain and storms.  Some Thunderbirds were good, some were bad.  They were good, when the rain was needed or bad when the rain came with destructive strong winds, floods, and fires caused by lightning.  The bird was said to be so large, that several legends tell it picking up a horses, cows or buffalo with its talons. They were said to have bright and colorful feathers, with sharp teeth and claws. They were said to live in the clouds high above the tallest mountains.  Thunderbirds were seen flying near and around Superstitious Mountains and Sedona.  Superstitious Mountains and Sedona are known to be mystical places.  Could the Thunderbirds have found a portal at these two locations and that is why so many are seen in Arizona?  There have been many sightings of Thunderbirds.  Could Thunderbirds also be misinterpreted as dragons?
THE PALUXY RIVER
The Paluxy River, also known as Paluxy Creek, is a river in the U.S. state of Texas. It is best known for numerous dinosaur footprints found in its bed near Glen Rose at the Dinosaur Valley State Park. The Paluxy River became famous for controversy in the early 1930s when locals found dinosaur and supposed human footprints in the same rock layer in the Glen Rose Formation, which were widely publicized as evidence against the geological time scale and in favor of young-Earth creationism. So is it possible that mankind was living with dinosaurs?  When stories of dragons were told, could early man be talking about dinosaurs?
*snip*
PTEROSAURS
Pterosaurs first appeared in the late Triassic Period and roamed the skies until the end of the Cretaceous Period (228 to 66 million years ago).  Pterosaurs lived among the dinosaurs and became extinct around the same time, but they were not dinosaurs. Rather, Pterosaurs were flying reptiles. Pterosaurs would easily be interpreted as a flying dragon.  There are sightings in modern times of Pterosaurs still existing in the jungles of South America and Africa.  If Mokele-Mbembe (a giant brontosaurus) is seen in Africa, why not a Pterosaur?
ANCIENT ALIEN'S SPACESHIPS
I am a strong believer that we were visited by ancient aliens and that ancient aliens jump started mankind.  I also, believe that early man who did not have the vocabulary to say "spaceship" could only describe what he saw by saying...a flying fire breathing dragon.  A spaceship that flies and releases fire and smoke would shake up early man, he would be astonished at what he was seeing. The roaring sound of a spaceship would probably bring early man to his knees.  This thundering spaceship that releases fire must be a fire breathing dragon!
DRACULA - SON OF THE DRAGON
Many nobles point towards their family tree and brag that they are the offspring of gods.  Dracula was no exception.  Dracula was known as Dracula, Dracuglia, or Drakula. Dracula  signed his two letters as "Dragulya" or "Drakulya" in the late 1470s. His name had its origin in the sobriquet of his father, Vlad Dracul ("Vlad the Dragon" in medieval Romanian), who received it after he became a member of the Order of the Dragon.  Dracula believed he had dragon blood flowing through him and that his royalty originated from the stars.
A DRAGON EXPERIENCER TELLS HIS STORY
Tyler Montgomery says that in 1978, he was in the open fields of Kansas and saw what he can only describe as a Pterosaur.  Tyler said it had a 50 foot wing span.  He thought at first it was an airplane or glider, but then saw it swoop down and pick up a lamb with its talons.  The lamb was squirming around and the creature dropped the lamb at an attitude of a 100 feet and the lamb on impact instantly died.  Then the creature swooped down and grabbed the lamb again and flew off.  The creature was a dark brown in color.  Tyler said the creature reminded him of a dragon, but was definitely a Pterosaur.
Sign in to follow this
Followers 0