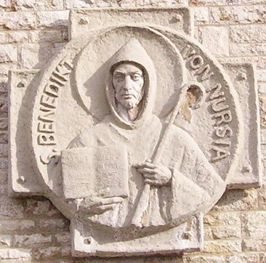 A small but important matter
Chapter talk given 5/16/21

We all have different vocations, and in our lives no matter what we do, there are always problems.  Some problems are big, others small, but no matter, even the small problems can cause frustration and anger.  So in families, offices, on construction sites, in the military and the police, etc. the human drama is often worked out in small matters, but nonetheless important.  Below is about a ‘small matter’ in our monastic community.  I do believe that in order to grow and to have good relationships with others is a constant movement seeking balance, but never really achieving it, or if it is achieved it lasts but a moment.  Yet it is crucial to deal with them for the wellbeing of each member of any community, as well as for the group as a whole.  Below is a chapter talk I gave on one issue.

Perspective, a particular attitude toward or way of regarding something; a point of view.

When I was a young monk, it did not take me long to see how some of my perspectives were going to get me in trouble.  Not with others, but with myself. In 1971 there were 70 monks in the community.  Most of them were in their early 50’s, with a few in their 80’s.  They were good men, some of them veterans from the Second World War.  I soon found out that they did things differently than what I was used to and I was the one who had to adapt.  Since many of them had been in monastic life a long time, their ideas of hygiene for instance was not I would say ‘modern’.  I soon learned that it was best not to look too closely at how food was prepared, or if some of the older monks went along with modern understandings of cleanliness’.  What helped me out was the fact that they were a healthy lot, and seemed to live to a very old age.  So I changed, survived, and saved myself a great deal of frustration.

I also observed my elders and saw how ‘some’ of them only increased their sufferings by the way that they interpreted how monastic life should be lived.  I doubt that they considered their perspective a perspective at all, but the simple truth.  Some of my elders were more liberal-minded, others more towards a more closed understanding of monastic life.  It was a time of change, radical change and I was amazed at how well the men lived together despite differences of opinion.  Yet, a few suffered deeply.

I have come to understand that the majority of my difficulties come from my outlook as well.  When I do not question my take on things (perspective), when it becomes unconscious, it can take on an infallible stance.  It can seem reasonable to the one holding it, and well, too restrictive for others who listen to their opinion.  When there is room for only one way at looking at life, there is bound to be trouble.

I have perspectives on how I think liturgy should be conducted.  Some in the community laugh at me about this, and rightly so since I do believe that I can go a little too far in one direction.  So over the years, I had to make a choice to change my perspective.  One thing I learned that made it easier for me to do this is that how I think things should be done is an opinion, we all have them, and in the long run do not mean much.  However the liturgy is an important part of our life, and the changing of my stance, has made it easier for me to pray with the community and I am very happy that I did.

What about my perspective towards members of the community.  Do I question myself on my ‘ judgments’ on my brothers?  Do I understand that my take on them can easily be wrong?  Do I take responsibility when I treat one of the brothers unjustly and seek to make amends?  Or do I think I am right and they need to change and come to me?  Do I appreciate what my brothers do for me, or do I perhaps on an unconscious level look upon them as servants?  They are there to cook my meals, do the dishes, and make sure that I get car keys when I need them.  Am I careless in how I respond to their request for help, as well for doing my part to make their responsibilities run more smoothly?   Do I understand that the perspective I take for truth is just an opinion, clouded by past experiences with others, as well as my family history?  Do I appreciate or take advantage of community members?  Do I show appreciation?

Years ago, one community member, a good man, now deceased complained to me that the brothers did not show appreciation towards one another.  So I asked him if he did that for the brothers.  He looked at me strangely and said ‘no’.  So he was seeing a reflection of his own lack of appreciation of the community.  It was not a big deal, he was a good monk but never got my point.

Life is made up of little things.  Seeming inconsequential acts that can be done without much thought, but can have in reality lasting repercussion not only in community, but also in the depths of our souls.  Our little choices can become deeply ingrained habits that can over time bring forth either good or rotten fruit.  We are either growing into loving, compassionate, human beings, or slowly, over time, without noticing, increasingly self-centered and demanding.

In a community, in a religious community, there is a danger of becoming so used to services being done for me that I can become ‘entitled’, but in the process living as if no one else has any right to demand from me.  For me to arrive at this place may take some years, but over time if I make one small act of self-centeredness over a long period of time, it becomes ingrained, it will take away from me the ability to see the bigger picture of what it means to live in community.  I believe that goes for any community, not just a religious one.  Instead of becoming a servant to others, I will over time make my brothers in the community my servants, becoming demanding that everything go according to my desires, but in the end could lead me to not even consider the desires or rights of those around me.  I suppose it could be the anteroom of hell.

Some of the monks who have made the biggest impression and actually formed me, or those who do little services for the community over a long period of time.  For years there is a priest in the community who out of love and concern for the brothers would every morning do some cleaning in our breakfast room, and before that before would do it in our old refectory.  He worked quietly and perhaps was not noticed, but that little service made life here more pleasant because he kept a small corner of the Monastery neat and orderly.  One small ‘wipe’ at a time, over many years.  I do believe that the love and concern that led him to do that had a big impact on his inner life, as well as on mine, and I believe on others.

Finish with a quote from Pope Francis:

A community that cherishes the little details of love,[107] whose members care for one another and create an open and evangelizing environment is a place where the risen Lord is present, sanctifying it in accordance with the Father’s plan.—Pope Francis