MYSTERIOUS CAPAY PHANTOM TIGER SEEN: Team Tiger:  Hobbes of Calvin and Hobbes; Tony the Tiger; Esso Tiger and Shere Khan from Rudyard Kipling's Jungle Book.  Crossover drawing by Richard Vasseur.  What does this have to do with Capay?  Easy.  On July 9, 1998, Cindy Logan from Woodland, Ca says that she saw a large phantom cat in Capay.  The sun was just going down and they could make out a glimpse of a very large cat prowling the hills.  Cindy's husband grabbed a pair of binoculars and said that he could see stripes on the big cat.  If that is so, wouldn't it be a tiger? Cindy asked.  Below is a blast from the past.  Let's take a look at my investigation at Capay. 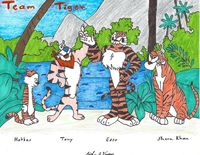 A preliminary investigation is to see if there is any substance to claims of paranormal activity that is said to be on property, business establishments or private residences. A claim has been made on property in Capay and at the private residence of Dr. Eugene Roger Apodoca, the uncle of paranormal investigator Chantal Apodoca. The date is July 5, 2009, Sunday. Roll call for this investigation are paranormal investigators: Shannon 'Ms. Macabre' McCabe - President of HPI; Paul Dale Roberts, HPI General Manager; Chantal Apodoca; Pika the Jack Russell Terrier; Rocket the Poodle and HPI (Pronounced Hi-Pee) the Corkie. BLONDE HITCHHIKING GHOST At the haunted Road Trip Restaurant and Bar in Capay, we are greeted by Dr. Eugene Roger Apodoca. One night in Cache Creek Casino/Club 88, a woman by the name of Rita Montoya told me that when she was at the Road Trip Restaurant and Bar, she saw a blonde haired woman standing late at night, about 3 am at the doorway of the restaurant and bar. She thought the woman looked distraught and circled back only to see the blonde hair woman dissipate in front of her eyes. She heard that the ghost may have been a woman that was killed while hitchhiking from this restaurant and bar. Dr. Eugene Roger Apodoca has heard rumors that this restaurant and bar was haunted, but we were not here to investigate this establishment. We were here to investigate his property and his residence. Dr. Eugene Roger Apodoca drives an old styled hippie type of Volkswagen van. We went through a long dirt road to reach his property. His property is nestled alongside gorgeous hillsides, the Capay Valley and fields of tomato plants. There are also several abandoned vehicles throughout his property. When surveying these abandoned vehicles, you have the feel of a post-apocalyptic world, a world that Mad Max would feel comfortable in. It made exploring his property even more interesting. Shannon and I allowed the dogs to conduct their own investigation of the property and there was a few times, that the dogs seemed excited in seeing something, but that something could be wild animals in the brush and thickets. While hiking towards the creek, a large snake slithered across the trail. On this farm, there are horses and goats. Dr. Apodoca tells us, that when paranormal activity occurs the horses and goats get edgy and agitated. Many times he has heard voices in various areas of the farm land. The voices sound like normal conversation, but the strange thing is, there is no one around to make these human voice sounds. The sounds of conversation come out of nowhere. 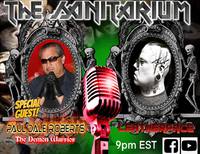 LAUGHING CAPAY DROWNING VICTIMS Sometimes late at night, he has heard the sounds of children laughing and the story is that the children laughing are the children who supposing drowned in a creek nearby his farm. Later on in the day, we investigate the creek area where the children are said to have drowned. HPI Paranormal Investigator/Researcher David Mace discovered that there is a lot of paranormal activity in Capay. In a book titled Unnatural Phenomena by John Clark, on page 22 describes an encounter in 1891 with a hairy man beast in the Northern Capay Valley. Ghostly activity has been recorded at the Capay Cemetery and is documented in the book 'Ghosts Are Real' by Patty Zloczewski. Other information that David Mace discovered are: Capay, California Ghost Tales www.ghostsofamerica.com/9/California_Capay_ghost_sightings.html A review says: “You may think that Capay, California is precisely identical to any other settlement in the United States of America, but when the gloomy shadows of the nighttime enter the undeparted take over. A lot of ghost sightings have been conveyed by the people who live here. Folks who have never stayed for a few days in this town will inform you it's a pack of lies, but a lot of locals say that these ghost stories are true.” These are some of the spooky things that have happened here recently (not in my words, but the words of the authors - Paul). HOLE IN THE CHEST GHOST A gentleman with a sizeable hole through his upper body has been sighted exploring Brick Chimney Canyon during the dawn hours. It has been said that this strange entity is a long departed Capay resident, that fell victim to a tragic accident. LADY RACCOON HEAD A female's body with a raccoon's head is from time to time distinguished traveling on a bicycle on a shady highway near Capay. Nonetheless, it unquestionably is a menacing ghost that you wouldn't want to encounter around midnight. CAPAY BEAST MAN A man having the head of a beast has been said to have been observed on a small number of instances laundering a blood-covered scarf in Alder Spring before dawn. According to the people who live here, this phantom is the phantom of a vacationer that was killed while journeying through Capay a long time ago, floating down Brooks Creek. According to what the locals allege, this ghost is that of a local resident who had a house here in Capay. STRAW HAT GHOST The ghost of a planter wearing a straw hat was distinguished at midnight gazing over Cottonwood Flat. Additional folks nearby have had identical events with a quite similar ghost. Loads of people who live here claim this phantom likes scaring unwise folks who dare to upset the silence in Capay. CAPAY SIGHTING OF UFO So from the information that David dug up, it appears that Capay has a lot of paranormal activity. Bonnie Fee, who frequents Cache Creek Casino said that if you camp out late at night, you will hear the sounds of beating drums from the spirits of ancient Wintun Indians that settled this land a long time ago. Bonnie also said that in 1994, a cigar shaped UFO was seen hovering over Capay Valley for 10 minutes, before it simply vanished. It was a great pleasure to interview Dr. Apodoca, who embraces his Comanche heritage and fills the air with a peaceful calm when he plays his wind flute. His niece Chantal also was interviewed by Shannon and I and she will never forget the night that she camped out on her uncle's property and her sister Monique took a picture of what looked like a full body apparition at the abandoned house on this land. Chantal seems to embrace her Indian heritage and perhaps her Indian ancestors were looking out for her, when she was a young girl on vacation in Oahu. While in Oahu, she was playing in the waves on a floating device, when finally a wave knocked her over. She found herself being sucked into a strong current underneath the ocean waves when miraculously she was saved by a large sea turtle. The sea turtle went underneath her and brought her back to the surface. As the turtle approached the safety of the shore, he went back into the sea, while Chantal found herself safe on land. Perhaps it was her animal spirit, the sea turtle that saved her life that day. Perhaps that is why Chantal and her uncle understand the spiritual embrace of the land and can coincide peacefully with the other side. Before I close this article, Shannon did extensive EVP work and out of 14 tries, may have obtained two substantial EVPs that need further analysis! I heard the possible EVPs and it sounds like a woman trying to communicate with us. I will keep you posted on the results of our EVP analysis. JUST IN: Ruben Guerra submitted this photo to Halo Paranormal Investigations, he claims that there are 3 apparitions behind the car, I see one, a man with glasses. Ruben says when he took the photo, there was no people behind the vehicle. The photo was taken at his previous home in Antioch.

Can you see 3 apparitions?