Ghosts are everywhere.  I will explain later in this article.  Sometimes, when I am watching Ancient Aliens or Secrets of Skinwalker Ranch, this commercial pops up: www.youtube.com/watch?v=Iey7_N_mEx4   - Yes, it is a promotional commercial for California.  They always show you the best of California and do not show you the thousands of homeless camps throughout the state. I take public transportation to work.  I drive my car to the Franklin lightrail station which is about 8 minutes away from my house. I then ride the lightrail to Del Paso/Arden lightrail station and catch the bus 113 to my job.  When taking public transportation, you meet all kinds of characters and many of those characters will sit right next to you and strike up a conversation.  A lot of people that take public transportation are homeless.  I am a social person, so if someone talks to me, I will respond.  On one particular day, I heard 3 homeless people talk about how their homeless camp is haunted by Don "the Belly" Vanzant.  When I overheard this conversation, I had to get right in the middle of their conversation.  I asked...."who is Don "the Belly" Vanzant?  This is where I will explain that ghosts are everywhere.  Read on....
Luis, who does not want to be fully identified says that Don was a friend that stayed in the homeless camp with them.  Don was a severe alcoholic and any spare change he would find, he would go out and buy some cheap wine like MD 20/20 known as Maddog or Thunderbird, Night Train Express and Boone's Farm.   Yes, Don was known to be a wino.  Don had a huge belly and that is where he got his nickname "the Belly".  Don in 2018, died of alcohol poisoning.   Luis now tells me that when they start a camp fire, Don will appear in the smoke.  There has been times when Don was seen as a shadow on the tent and when Luis or someone else opened up the tent there was no one there.  They have been touched by Don.  Don was known to pat someone on the back hard, if he liked something they did, like if someone gave him some wine.  Luis and another homeless camper named Sonny Logan said that on a few occasions Don the ghost has pat them hard on their back.  I asked Luis if he wanted me to send Don to the light and Luis says he and his fellow homeless campers can deal with Don being around.  Luis says he is Catholic and has access to holy water at a Catholic Church in downtown Sacramento, if things became too annoying with their dead friend, they will then send him to the light.

Luis also told me that many homeless camps are haunted, because homeless are constantly dying in the streets.  Luis tells me that he has had homeless friends die of  Methamphetamine overdoses, heart attacks, succumbing to the elements, untreated cancer, old age, alcohol and other drugs.  Luis says that he had two homeless friends that were murdered by teenagers, that bashed their heads in with baseball bats.   Luis says that many homeless people can tell me stories of hauntings at campsites.  Luis says..."that the homeless wandered around aimlessly while alive and they wander around aimlessly in death."  Luis is correct, I have actually received phone calls from the homeless that want Halo Paranormal Investigations to conduct a cleansing at their haunted campsite.  I have done a few and at times I will provide them the information, so they can cleanse their own campsite.  One campsite that I conducted a Roman Catholic cleansing was in downtown Sacramento.  The homeless man named Eddy called me and said his friend died at the campsite from Covid-19 complications.  Eddy said he called him a friend, but he was obnoxious when he was alive and he is still obnoxious while dead.  Eddy says that his so called friend pulls his hair, sits on his chest while he is trying to sleep, etc.  I helped Eddy out and conducted the Roman Catholic cleansing and Eddy hasn't had any problems since. 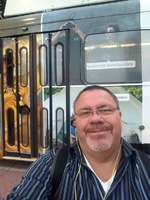 The statistics are high in regard to the deaths of the homeless.  Here in Sacramento in 2018, 132 homeless people died on the streets.   In 2019, 138 homeless died in the streets.  Yes, ghosts are everywhere. Now to change the subject just slightly.  While riding on the lightrail, I overheard a lightrail security guard say that the Florin Road lightrail station is haunted.  The security guard has said that some people have been touched, the lights flicker, disembodied voices are heard.  Why would the lightrail stations be haunted?  Easy...lightrail vs. human.   When a human is hit by a lightrail, they are killed instantly.  There are deaths all the time at lightrail stations.  A 70 year old man was killed by a lightrail at College Greens; there was a recent murder at the Florin Road station; 3 boys were horse playing by the lightrail and 2 of the boys pushed the 3rd boy into the oncoming  lightrail, killing him instantly; 65 year old man hit by lightrail on Fruitridge lightrail station in 2017; in 2015 there were 5 lightrail vs. human fatalities, another citizen killed by lightrail at Folsom Blvd and Coloma Road. So, as you can see many of the lightrail stations have faced death and because of that, there are probably some very haunted lightrail stations.  Here is an example of a haunted lightrail station, that I wrote a few years back called Slapper: The Phantom  of Akalai Flats/La Valentina:
beforeitsnews.com/paranormal/2021/05/slapper-the-phantom-of-akalai-flatsla-valentina-revised-2553349.html
Sign in to follow this
Followers 0