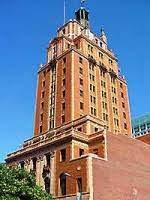 HISTORY OF ELKS TOWER:
A little history about the Elks Tower.  In 1926 the Sacramento Elks ran out of room for their meetings.  The Sacramento Elk members got together and decided to erect a 14 story brick and steel tower on the corner of 11th and J Street.  Now there are a few stories that this place is haunted.  Here's a story from a local named Terence White.  Terence White attended a friend's wedding at the Elks Tower. When Terrence went to the restroom, a strong hand grabbed his right shoulder and he turned around, no one was there.  Terence went back to the wedding party.  Terence was a bit shaken from his experience and Terence believes that this building is haunted.  It is said that the Elks Tower is a popular destination for weddings and events.  They restored the ballroom and many people have commented on how beautiful everything is inside. At one point of time, the Elks Tower was the city’s tallest building. A little tidbit is the fact that the building owner in 2016, proposed to turn part of the tower into a luxury casino and swanky vintage card room, but legal obstacles got in the way and the waters of that proposal are now stagnant.  Elks Tower is built in the style of the Italian Renaissance period.  A radio station called KZAP has their transmitter on this building.  KZAP is a free form radio station.   Elks Tower has 100 hotel rooms and a storefront. The Benevolent and Protective Order of Elks, the group which commissioned the building is a fraternal order founded in 1868.
CLOUD CREATURE OF ELKS TOWER:
Lena Carpenter also attended a wedding at Elks Tower and when walking down the hallway, came upon a dark mist.  The dark mist as Lena describes it, was cloud like.  Lena said at one time it was fluffy like a cloud and it was dark.   It reminded her of a dark rain cloud.  Then two small arms with tiny hands came out of the cloud creature.  Lena said she has never told anyone about her experience.  Lena says she can still see this cloud creature in her mind.  The experience haunts her to this day.
MY EVP:
After receiving information about the Elks Tower from Terence and Lena, I had to do some research on the tower and I could not find any deaths connected to the tower.  Of course the tower is very old, it was built in 1926, so anything could have happened at this tower.  Plus, the fact  that  it has 100 hotel rooms inside this building.  Anything could have happened in any of those rooms, during a long period of time, that starts back in 1926.   I have been on the first floor and walked around the building.  I did manage to get an EVP (Electronic Voice Phenomena) outside of the building.  The EVP was of a man's voice that said..."why are you here?"
As for anyone dying inside of this building, I cannot locate any records that indicate that, but I did find information on a nearby homicide and homeless people that have died near this building.  Another factor is that if someone in the past attended the Elk's meetings at this tower and died at their home, they may be haunting the tower, because it was a place that they loved going to and a place that they are very familiar with.  The dead have a habit of haunting the places they enjoyed while living.

WHO ARE THE ELKS?
The Elks originally borrowed a number of rites, traditions, and regalia from the Freemasons. However, by the first decade of the twentieth century, much of this had been abandoned as the Elks sought to establish their own identity. The original two degrees required for membership were consolidated into one degree in 1890, the apron was discontinued in 1895, the secret password was gone in 1899, and the badges and secret handshake were abandoned by 1904.
INITIATION INTO THE ELKS:
Initiation and funeral rites still exist, however. The initiation rite is not considered a secret. The initiation involves an altar, with a Bible upon it and chaplain leading the brethren in prayers and psalms. The candidate must accept a "solemn and binding obligation" to never "reveal any of the confidential matters of the Order". He further promises to uphold the Constitution of the United States, protect brother Elks and their families, only support worthy candidates for admission and never bring political or sectarian questions up into the Order. The funeral rite is called the "Lodge of Sorrow" and also involves prayers.
Shadow the Tarantula 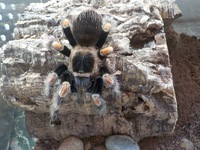 FIRE SPRITE OF ELK'S TOWER
The strangest story that I heard was that on one of the top floors a tiny fire sprite is seen going from one room to another.  I met Randy Laybourn at Bobby McGees in Citrus Heights.  Randy said that he was once a window washer for this tower.  Randy said a fellow window washer was walking through the hallway and saw a small flying  humanoid, probably 2 inches in length, that was on fire, fly from one room to another room.  The creature was able to fly through a door like it was butter.  From the way Randy was describing this, it seemed like he was describing an elemental, a fire sprite.  It makes you wonder, if the Elk members were conducting rituals similar to Freemasons, did they perhaps summon some entities into this building by accident?  Is there a portal in this building?  Randy says he never saw anything unusual in this building and never had anything considered paranormal happen to him in this building. Randy says that the only strange thing that he witnessed is that he opened up a closet and there were  tons of spiders in that closet.  Randy says he does not feel this was a a paranormal experience, but perhaps something that is natural.   Randy says..."female spiders do lay a lot of eggs?"
Sign in to follow this
Followers 0