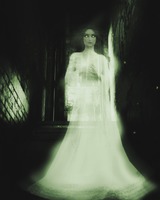 Michael Eugene Sanders called the Paranormal Hotline and told me that he is dealing with a female spirit that committed suicide in his home.  He has seen this female spirit 3 times at the foot of his bed and she is usually holding something that is glowing.  Michael then tells me that she has now entered into his dream.  On 6/16/2021 Michael dreamed that he was in some very small town in the woods.  As he was walking down the street he saw a Chinese lantern floating towards him.  After the Chinese lantern landed, he then saw the ghost that is haunting his home.  This ghost that he calls Anna Dee floats down towards him from the night sky.   He says that Anna Dee floated down like Mary Poppins, she was wearing all white and she wore an outfit that looked like bell bottoms, but was very fluffy and tattered at the end and the tattered parts of the pants moved with the wind.  Anna Dee then held his hand and he took her to the local bar.  The bartender was shirtless and was making a rum and coke for Anna Dee, then all of a sudden he starts concentrating and inhales deeply and his right nipple on his chest starts blowing up into a mushroom shaped skin balloon.  When it is large enough, he pulls out some scissors and snips off the skin balloon from his nipple.  The skin balloon floats and he hands it over to Anna Dee.  I ask the bartender how he did that?  The bartender then says he has elastic skin and he is able to make skin balloons from his nipple and the air from his lungs inflates them.  Then he starts talking gibberish and I was unable to understand him.  I then wake up and Anna Dee is standing at the foot of my bed holding a glowing object in shape of a ball.  I scream, I am terrified and Anna Dee fades away into nothingness.  I ask Michael why do you call her Anna Dee?  Michael tells me that an old woman that lives at the complex for many years, knew of the suicide and said her name was Anna Dee.  She took an overdose of sleeping pills and struggled with depression.
I told Michael on how to bless his home and he will proceed to do that.  Michael lives in Missouri.
Sign in to follow this
Followers 0