I used to enjoy going to my family reunions or family get-togethers.  I have some very interesting family members, but instead of talking about each family member, I will tell you about two uncles, both are deceased.  The first uncle I will talk about is my uncle Manuel "Manny" Ayala.  Manny was a former CHP (California Highway Patrol), his sister Josie Hodson is a retired CHP Radio Dispatcher.  Manny's nephew Robert Crain is a retired CHP and now is a private investigator and CEO for his own company called Arcy Professional Investigations, Inc. Josie's ex-husband Larry Hodson is a retired Oakland police officer.  Uncle Manny Ayala retired early from CHP, when he got run over by a drunk driver.  When he finally recovered, one leg was shorter than the other.  After his recovery, he worked at the Fairfield Truck Weigh Station and I would drive through the weigh station and greet my uncle.  One of the stories that my uncle would tell is how he pulled over Charles Manson, who was driving towards Los Angeles in a beat up van.  He pulled over Charlie Manson for reckless driving and gave him a ticket.  Uncle Manny was a Vietnam vet and I will never forget his unforgettable stories of his days with CHP.  Before Manny passed away, he was a farmer in Utah.
My other colorful uncle was Jose "Joe" Causing. Jose is a Vietnam vet, 82nd Airborne, Merchant Marine and jazz drummer.  He was also a Gung Fu Master/Instructor in the 12th degree, who learned Gung Fu from Bruce Lee's Martial Arts Schools.  Note: Jose attended Bruce Lee's funeral in Seattle, Washington.  Jose drove an old gray Cadillac with the license plate # Gung Fu.  As a Merchant Marine, Jose traveled the world.  He was an international traveler.  As a young boy, I was fascinated with the paranormal and I would always have my uncle seek out paranormal stories from the countries and territories that he visited.  When he visited Peru, Ecuador and Columbia as a Merchant Marine, here are some of the paranormal stories he related to me:
Peru:
When Jose visited Peru, he was floored at all of the stories he heard about this country.  Jose talked with Jesus Munoz.  Jesus says that he was surfing in 1977 and came upon a huge turtle that bumped his board and knocked him into the waves.  Jesus says the turtle had to be about 150 feet, with a width of 20 feet. Jesus could not believe on what he saw and told his family members and friends.  One of his friends told him, that he saw the Sachamama.  This is a cryptid that is seen in the ocean regions of Peru.  A Sachamama is a giant turtle and has two pairs of snail-like feelers at the base and the tip of the snout.  Jesus told Jose that he stopped surfing for 2 years, after he had the incident with Sachamama.
Painting from Peru.

Luciana Suarez, a native of Peru says that when she lived with her parents, her home was very haunted. Cabinets would open on their own.  There was times when her mother and Luciana were pushed by an unseen force.  Her mother experienced the entity grabbing the back of her hair and pushing her head into a wall.  Luciana said that they were too poor to move away.  Then one day Luciana's father noticed that part of the floor boards seemed to be rotted out and the wood was raised above the other flooring panels.  When Luciana's father removed the rotted floor panels, he came upon a burlap bag.  Inside the bag were human bones. There was a skull, ribs and one leg bone. Other bones were missing.  Luciana took the bones to a nearby cemetery and buried the bones.  He said a prayer over the bones and threw holy water upon the makeshift grave.  After this was done, the haunting of their home stopped.  Luciana believes that the bones belonged to the family that once lived in their home and was probably a relative.  There are many, many ghost stories in Peru.  Peru is very rich in culture and history, so it would seem natural for a country like Peru to have so many ghost stories.
Also, archaeologists have a field day in the story of giants that once inhabited this land.  The giants were so tall, that a 6 foot man would only reach the knee cap of a giant.  The giants were known to raid villages and devour the farm animals and they were also known to eat humans.  Besides the giants, you had alien elongated skulls.  In 1928, author and researcher Brian Foerster talked about the bizarre elongated alien skulls.  Were the inhabitants at the time trying to mimic extraterrestrials that lived in Peru, by stretching their skulls to look like them?  Or do the elongated skulls carry the  DNA of humans and an alien species, a hybrid race?  Were the giants the fallen ones...the Nephilim as mentioned in the Bible?  Peru has many mysteries and I can't wait when the day comes that some of these questions can be answered.
California Opossum (related to the Amazon Opossum) 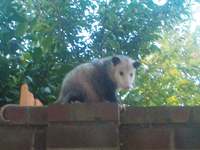 Just like Peru, there is evidence that giants once roamed the land of Ecuador.  Jose says there are stories of UFOs seen in the Andes and cryptids called "Stick Men" seen crossing paths in the Ecuador Amazon.  From the way Jose described the cryptids, it almost sounds like the Fresno Nightcrawlers that you hear about today.  Also, there have been reports of hikers who have encountered Amazon Opossums and as they watch the opossums walk along the tree branches, some will fade away, as if they are ghosts.
Columbia
Felipe Iglesias told Jose that he was taking care of his sick aunt in her home and when his aunt went to sleep, he went into the broom closet to retrieve the broom and start sweeping around the house.  When he was finished, he placed the broom back into the closet.  As Felipe was walking away, the broom closet opened and the broom smacked him right in the back of the head.  Felipe believes it was his cousin Juan Pablo who died in the house.  His cousin died of untreated bronchitis.  Felipe believes his cousin did not mean any harm for hitting him in the head with the broom.  Felipe believes his cousin was trying to let him know, that he is still around.  Columbia is just like Peru and has many, many ghost stories, this is just one ghost story out of thousands of ghost stories in Columbia.  Just recently through his Facebook profile, the mayor of Armenia, Jose Manuel Ríos Morales, said that at approximately 11:29 p.m. on Monday, August 2, a security guard suffered a “paranormal attack” in a Colombia.  There is a video of the attack and it shows the security guard as he hits the wall.  It actually looks like he was violently pushed by an unseen force.
Sign in to follow this
Followers 0