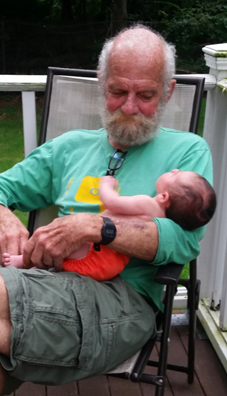 Perspective is everything, as the saying goes. It is a deep truth, though it can sound like a cliché. Yet, is not a cliché, a truth that is perhaps spoken to often, and therein loses its effect on the soul.David is (was) my younger brother. He was born in July of 1950, so he is a year and seven months younger than me. He would often make me very aware of that point when he was in a joking mood.

Like all human beings, he was complex, and in many ways unknowable. I guess it is only the deep loving gaze of God that really comprehends each of us with all of our gifts, foibles, and yes, even aspects that are extremely self-destructive. It is true of me, and I would surmise, for the vast majority of mankind.

My spiritual life, and would assume my late brother's inner life, was rooted in his past. Perhaps much of it was forgotten, but the effects were apparent to him, and to those who knew and loved him. It explained his often perspective on life. However, deeper than his past there were deeper roots that reached into the very heart of God. Grace works slowly, maddeningly slow, yet the Lord has all eternity to work on our souls, and I believe that is true, because people in the eyes of the Lord are beautiful beyond measure, even if often it can be hidden with the apparentness of our struggles and failure

I loved David very much. The fact that he had been living with us here at the Monastery, in our retreat house, since 2016, the love I already had for him, because of his proximity, deepened. I could sense his gentleness, kindness, and yes his deep anxiety, and at times his self-loathing. Which is not a stranger to many. I have my own share.

He has been an addict most of his life. Both with alcohol and drugs. He paid a heavy price for this, of which he was well aware, yet he could not live without. While he stayed with us we had an agreement which he kept. He limited his drinking, and when I thought it was starting to go over the line, I would talk to him and he would pull back.

The monks in the community, who knew my brother, loved him, and would often ask me how he was doing. I never quite had the full answer. Overall, however, I believe he did well here. This is a quiet place, and by the fact that he could stay here and function, and get along, and did not become a problem, said a lot about his inner strength and resilience.

He would often set on the back porch that is right outside our ‘talking dining room’. He loved to play ‘Klondike Solitaire”, and would spend hours every day doing so. One day he told me that he believed that when he played with the cards, he was actually praying silently, and he found peace in holding them, and simply, quietly, going through the game.

Solitaire is an interesting game. It is based on chaos. I would think that you could play the game for 100 years and never come up with the same hand. Yet the hand has to be dealt with. The game is a combination of luck of the draw and the skill in seeing patterns and future possibilities. Just like life in many ways. I believe that in playing the cards my brother was seeking to understand the chaos as well as the stability of his own life.

He has three beautiful children. Darshan, Sarah, and Mark. They are all successful, intelligent, and loving towards their father. Their mother is named Sheri, and she did a very good job in raising her children. By the very fact that the children have a good relationship with their father, says a lot for the mother. They have been divorced for around 40 years I believe.

David would often share with me his inner torment. He never went into detail, but it was said in such a way, that it helped me understand his relationship with his ideas of God, life, and what it was all about. Over the years it seemed to have changed a bit, and he did tell me that he was beginning to believe in a personal God. I never pushed,, or tried to convert him, but simply talked to him about the love of God, and that the problem was with us, not with God. We have created this world, we live in, and the situations that wounded my brother so much. I do think that many of his serious problems began in Viet Nam. He showed signs of PTSD, but he dealt with it by keeping his life simple. He was very austere in how many possessions he allowed himself. I admired that about him.

I took him to the airport about a week ago, and he died on the 29th of December. It seemed to be peaceful. He was found outside his motel room, on the porch, sitting on a chair; and it seemed that he simply ‘stopped’. That is the way the American Embassy explained it to me. I am glad that the Lord allowed him to go that way. My brother, more than me, hated fuss. Fuss drives me crazy, so my brothers were about double my struggle with just ‘too much of anything”.

When I took him to the airport, as he was getting out of the car, I had the premonition that this was the last time I would see him. I gave him a good long hug, held on tight, and said “I love you brother, very much”. He told me the same thing, and he walk into the airport, out of my life, and into what lies beyond.

One of the healing aspects of being Catholic is that we do pray for our dead. So I pray for my brother. My sister Judy, who has a heart bigger than the universe, and loves the family very much, shared with her that I knew that she does not believe in praying for the departed, but she could go to the time of David’s death and pray for him there. It is the same thing. Before the Infinite there is no time, only the ‘Now”.

Since David lived with me for much of those years. For over a year when the Pandemic started, the flame, and the warmth in my heart that I got from just seeing him sitting playing cards, talking with him, and driving him to his doctor appointments is now gone. So there is a coldness there, the flame is out, yet he is still close, and one day we will meet again. There is one, world,, not two, he has just moved into a larger part of that reality-Br.MD

Edited December 31, 2021 by markdohle
trouble with paragraph spacing, and size, fixed it.