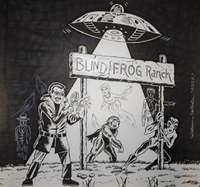 Drawing above is by William Carlisle. This drawing depicts me (Paul Dale Roberts) HPI's Esoteric Detective at Blind Frog Ranch in Utah. I am analyzing a gold coin found at the ranch with my magnifying glass. Supposingly, there is treasure hidden at this ranch. A lot of paranormal activity happens at this ranch, such as UFO sightings, ghosts, poltergeist activity, Bigfoot sightings and it's only about 25 miles from Skinwalker Ranch.
On October 4, 2008, Saturday, I ventured to Skinwalker Ranch in Utah.  I went with 2 of my paranormal investigators.  On the night that we arrived in the Uintah Basin, it was storming.  For the life of me, I don't know how I was able to drive to the basin in that violent lightning storm.  On that night, I witnessed ball lightning and heard a strange screeching sound.  You can see the full story here:
www.unexplained-mysteries.com/column.php?id=260850
What I enjoy about paranormal investigating, is interviewing the witnesses.  There was one witness, that I didn't pay much attention to, because he was talking about another ranch and not the Skinwalker Ranch.  I took notes and came across those old notes in my "HPI Files".  Adam Cottage explained to me that his grandfather sought out a hidden gold treasure 25 miles from Skinwalker Ranch.  Adam says that his grandfather received information that a huge treasure trove of gold is hidden in the Utah Hills, near and around the Uintah and Ouray Indian Reservation at a ranch.  Adam also says there is a lot of UFO activity at this ranch and spectral ghosts and shadow people have been seen at this ranch.  Going through these notes, it dawned on me that Adam must be talking about the Blind Frog Ranch!  I knew nothing about the Blind Frog Ranch, until Discovery Channel put on a new reality TV series called "Mystery at Blind Frog Ranch."
Blind Frog Ranch was given this name, because blind frogs were found on the property by the owner.  This 160 acre ranch sits near La point Utah and is known to have UFO activity on and around the property. The Blind Frog Ranch is VERY near to Skinwalker Ranch, perhaps 25 miles down the road.
When I was talking with Adam, he told me that I should be investigating not only the Skinwalker Ranch, but the ranch down the road (Blind Frog Ranch).  Adam says that his grandfather was friends with one of the Indian elders and that this elder told him that this land near and around Blind Frog Ranch was once inhabited by giants.  Adam calls these giants the Nephilim, because his grandfather called them the Nephilim.   Adam's grandfather was very religious.  The giants buried and hid large amounts of gold in caverns at the land surrounding Blind Frog Ranch.  Adam's grandfather says that bones of giants were found in some of the caverns and those bones were taken away by the military, never to be seen again.  Adam learned from his grandfather that the reason why UFOs are seen at Blind Frog Ranch is because of the gold and that there is a leyline that goes from Blind Frog Ranch to Skinwalker Ranch.  Adam also told me that according to his grandfather that the leylines are used as portals to get from point A to point B, and that they are an energy source used by the UFOs.  Adam's grandfather acquired all of this information and knowledge from an elder.  This elder had the powers of a shaman and was connected and communicated with extraterrestrials.
Adam believes that one day, we will discover gold and the bones of giants at the location of Blind Frog Ranch.  Listening to Adam's story at the time, I didn't realize his story had any foundation of truth.  I did take careful notes and I am glad I did, I recently learned that a Utah native named George Keller learned about a secret cave from his Native American Indian friend named Lone Eagle.  Lone Eagle took George Keller to this secret cave.  In this secret cave, they came across ancient metal records, the mummified remains of giants, arrowheads, 2 inscribed bell like objects made of lead and stone tablets.  George Keller related this information to the landowner named John Brewer.  The secret cave became known as Brewers Cave. All of this information is the stuff of legend and discovered in the diaries of John Brewer.  Some scholars believe that parts of John Brewer's diary is fabricated and the cave was never located.  There are pictures of some of the items from the cave that exist today and may be the only proof of the existence of this cave.
I hope there will be a thorough investigation of Blind Frog Ranch.  I am curious on what they may find.
Share
Followers 0