Jump to content
Join the Unexplained Mysteries community today! It's free and setting up an account only takes a moment.
- Sign In or Create Account -
The Ten Most Haunted Places in the World
Paul Dale Roberts, HPI's Esoteric Detective
Halo Paranormal Investigations 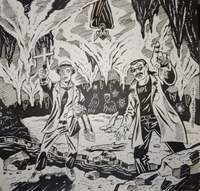 The drawing above is by William Carlisle and depicts Kolchak - The Night Stalker in the caves of Mount Shasta hunting the paranormal with Paul Dale Roberts.
Being a world traveler, I have been to over 59 countries and territories. These are some of the places I have been and I will explain to you why I think they are some of the best haunted places in the world!


1. A Red Light District Studio in Amsterdam:  A lady of the night named Cindy works out of a window studio in the Red Light District.  Cindy told me that her studio  is extremely haunted. Cindy saw the back door opening on it's own and closing on its own.  Cindy has been touched by an unseen entity.  Cindy has heard a female voice whisper in her ears.  Cindy believes that the lady who worked this window studio before is still around as a ghost.  The lady that worked this studio committed suicide and still likes to hang out.  Cindy says she is not scared of the ghost and says she likes the company.

2. Papeete & Morea, Tahiti: Tahiti is a fun place. You can swim with the dolphins, you can observe the foggy mist that surrounds the luscious green mountains of the islands. This is the place where Mutiny on the Bounty was filmed at. Everything is done by 'island time'. This means if you are going to feed the sharks at 5pm and you are waiting for the bus, the bus may arrive at 6pm. As you travel down the road in this bus, it may do a U-turn so the bus driver can pick up her friend. Then the bus will arrive at the spot where they are going to feed the sharks. Don't worry, everyone is waiting for you to arrive. You arrive on 'island time'. When we rode on this bus, we stopped at a very old cemetery on the island. It was the most creepiest cemetery I have ever seen. The islanders leave all sorts of family possessions on the graves and it is rumored that late at night in this cemetery, spirits have been seen roaming in and around this cemetery. When night falls upon this cemetery, you must remember there are no street lights, so everything is spectacularly dark!

3. Umoya Lodge, Auckland, New Zealand: Auckland is a busy metropolis. When I stayed in Auckland, I stayed at the Umoya Lodge. This lodge is rumored to have a Maori doorman ghost that wanders the halls at 3:00 a.m. Once in a great while, a tourist will see this Maori doorman casually walk the halls as if he is looking for something. It is said that he was truly an employee of the hotel and that one night, he suffered a massive stroke while sitting on a couch in the lobby. He has never left the hotel, because he felt the hotel was his home and he loved out-of-country guests. He would always greet the guests of the hotel with a smile.

4. Tower of London - England: When I was in England, I visited Stonehenge, Westminster Abbey, Piccadilly Square, East End where Jack the Ripper and the Kray Twins frequented. From England, I took a train to Edinburgh, Scotland and a train back that went through Cardiff, Wales. On this train ride, I was looking for crop circles. I didn't see any. I will never forget my tour of the Tower of London. This place is extremely haunted. Tower of London is on the North bank of the Thames River. This is a place that prisoners were interrogated, tortured and executed. The Kray Twins were the last prisoners of this fortress. Ravens flock to the tower, if the Ravens ever left the Tower of London, the curse says that the Tower of London, The White Tower, the Monarchy and the whole Kingdom would fall. During WWII, most of the ravens were killed, there was one survivor, the Raven's name was Grip. After WWII was over, more ravens came back to the Tower of London. The Ravenmaster now takes care of the Ravens. The ghost of Guy Fawkes who inspired the movie and comic book 'V for Vendetta', was tortured and executed in the Tower of London, he is one of many, many ghosts that haunt the Tower of London.  Added note:  I also stopped off at: Edinburgh, Scotland and Cardiff, Wales. Edinburgh and Cardiff have many ghost stories and some UFO sighting stories.

5: Puerto Rico: When I stayed in Puerto Rico, I wouldn't say the island is haunted by ghosts, but it is haunted by the infamous Chupacabra! There are many, many reportings of this odd creature. A creature that is vampiric by nature. It seems that this creature has bat type of wings, it sort of resembles a 'gray' alien, it flies, it's agile and it can drain the blood out of a goat in a matter of seconds. Could this be an offshoot of a 'gray' alien? Was there some DNA manipulation done by the 'grays', that created this hideous monstrosity? Did the Chupacabras escape the grays and now are trying to survive on the island of Puerto Rico? It is rumored that there is a UFO base off the waters of Puerto Rico. Many UFOs are seen coming in and out of the ocean that surrounds Puerto Rico. Puerto Rico also is in the Bermuda Triangle. This is a very mysterious island and the Chupacabra legend continues to grow. When I was in Puerto Rico, I did not encounter the Chupacabra. Instead I encountered many beachcombers.

6: Bluebeard's Castle, St. Thomas: I went to St. Thomas to see my sister Sharon get married to a guy named Captain Crazy Jeff Voshell. Jeff was the Captain of his own boat called the Orion. He would take tourists to other islands that were nearby in his vessel. He was also a boat mechanic and one of his client's was Morgan Freeman, the movie actor. Captain Crazy Jeff Voshell was a legend on the island and it is rumored that the movie "Captain Ron" was based on him. Jeff was just like Captain Ron, very obnoxious, in-your-face type of guy, a real rugged sailor. My new brother-in-law took me to Bluebeard's Castle, that is reputed to be haunted by the spirits of pirates. Some of the locales claim that the ghosts of the pirate known as Blackbeard and the pirate known as Bluebeard haunt Bluebeard's Castle.

7. Dublin Castle, Dublin, Ireland: I have a plaque in my house that reads: Blarney Castle, in the Village of Blarney and the County of Cork, Ireland, I hereby certify that Patricia Mary Roberts, Paul Dale Roberts & Jason Randall Porter of Sacramento, California visited this castle and/having kissed the Blarney Stone is now sent forth with the gift of eloquence which this stone bestows dated this 25th day of March 1997 - signed Richard Lowe(sp) Glohmust(sp) Keeper of the Castle. When I entered this castle, there was a thickness in the air. I would say that Blarney Castle is extremely haunted. There is a fairy passage underneath the castle and I could only walk half way into this dark passage and had to turn back, because I felt a feeling of dread. Are there ghosts at Blarney Castle? You betcha!  Added Note:  Took a train to Northern Ireland and a lady on this train said that the train going to Northern Ireland was haunted by a little girl.

8. Red Square, Moscow, Russia: I saw the Kremlin, Gorky Park, the KGB headquarters and Red Square in Moscow! There is so much history in Moscow, it would take a whole book to talk about it. Stalin was one time displayed at Red Square and his body mysteriously disappeared. I was able to see Lenin's body encased in glass. The very first Cosmonaut is buried at Red Square. Many stories are told by the Russian people that spirits are all around Red Square. Some of the spirits that are rumored to haunt this area are the tragic Romanovs.

9. Kwai Bridge, Thailand: When I was in Bangkok, I had to see Kwai Bridge which inspired the movie based on the true story: The Bridge over River Kwai (starring John Wayne), where many, many American soldiers were tortured and lost their lives. There is a museum that displays the horrific episodes that occurred. The Thai people say the Bridge over River Kwai is very haunted. People have heard moaning sounds as if people were either dying or being tortured. This is a good place for a residual haunting activity. Besides the hauntings, Thailand is a fun place. This is where I went para-sailing for the first time. The hotel I stayed at, Centre Point Hotel, Room 805 was a very tranquil room with many accommodations. The people of Thailand are very friendly and there is so much to do. Why do you think they wrote that song..."One Night in Bangkok by Murray Head"?  Added Note: Also stopped at Burma, Hong Kong, Pattaya Coral Island. Flew over Vietnam, Aleutian Islands, Bering Sea, Midway Islands, Laos.

10: Morocco, Africa: When I was walking the streets of Morocco, I kept imagining a dark van pulling up next to me, the doors opening and ski masked men grabbing me and pulling me inside the van and driving me away to some unknown location. I was scared in Morocco, especially after 9/11. I wanted to hurry up and catch the ferry back to Gibraltar. Morocco at one time was a romantic place. Movies are still made in Morocco, like Colin Farrell in the movie Alexander, was partially filmed in Morocco. As you walk down the streets, you can purchase a flying carpet at some bazaar. You can eat Couscous, a type of Semolina pasta. There are many ghostly stories in Morocco. There is talk of haunted synagogues. There is talk of families plagued by demons. Perhaps the demon known as The Legion as seen in the movie Exorcist originates from Morocco. Morocco to me, is scary in many ways, not a place I want to stay for a long period of time.  Added Note:  Also stopped over at Vilar Formoso - Portugal, Gibraltar, Madrid - Spain.

There are many haunted areas in the world, what I tried to do is take you off the beaten path with areas that you may not be aware of. Everyone knows about the Tower of London, but how many people know about the cemetery in Papeete, Tahiti? I have a strong interest in the paranormal and that is why I am the co-owner of H.P.I. (Halo Paranormal Investigations).