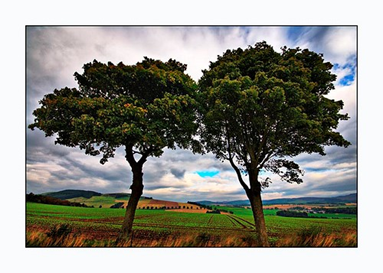 Two Trees, Two Monks
(First published in Jan 2009)
We have a sidewalk here going East and West laid in different colors of stone… black, and tan and white ending in a little cul-de-sac. Very tiny actually, connected to another sidewalk going North and South. I often like to walk there in the early morning, long before the sun shows it rays.
In the far past, perhaps about 30 years ago, two trees were planted at this spot, where the two sidewalks meet. Corentine was Paul’s assistant; Paul was the one in charge of the placement of plants around the area. . Corentine planted these trees on his own, which caused a little tempest in a teapot. In the end, the trees remained, though Paul was angry for quite a while afterward, yet in the end it faded, the waves once again became calm.
The trees grew and though I never learned their names, I got to love watching them grow and thrive. Two twins, growing side by side, the same size, same leaves, green in summer and red in spring and fall. Little trees, not more than ten feet high when full-grown, yet strong of limb and graceful in form, they almost seemed to be in a dancing pose. I used to think that at night when no one was around, they would come together in a mad waltz around the lawn, which would make me smile, for when young, dancing was a passion of mine.
Until one year in the mid-eighties, one of them simply died, the way things do, just cease. So it was cut down, and for a while, only the stump remained; then over time, it was also gone. So the one remained, alone, forlorn, at least it seemed to me, though the feeling was mine, hung upon the tree, like a sad Christmas ornament. So every year I would enjoy its red leaves in spring and fall and green leaves in summer and in the winter the beauty of its limbs placed against the moon and star-filled sky.
Then, last year, it seemed to be ailing, its leaves not as plentiful as before. One morning I noticed that no leaves were coming up at all, unobserved before. Perhaps because I took the tree for granted, its beauty and comely limbs graced the canvas as I look up into the dark sky…. I foolishly thought would always be there. Then it was gone, and only a stump remained. It is still there, for the tree was cut down a short while ago. I did not know this was going to happen, but not surprised, for things die and cease, don’t they?
Well in between the death of the first and second tree, Paul died, he fell in his room and his brain bled, so he also went the way of all things, what was once there now gone. Corentine lived for many more years, yet one day, he simply lay back and peacefully died, and he too joined the majority that has lived and moved on, ceased, or whatever you want to call what happens at death.
So this morning, during my walk, as I looked at that stump, I feared that when the remnant was gone, the memory of Corentine and Paul would also die away, for that happens also, the fading, the forgetting, becoming perhaps just a vague memory, so I said a prayer for them, perhaps this will keep their memory alive.
Temporality, easy to lay aside and not contemplate, can when reflected upon can be both calm and be terrifying, truly a double-edged sword cutting both ways. For one day I to will be just a vague memory and eventually forgotten; just a headstone in a cemetery, that perhaps people will look at and wonder; who was he?-BrMD
PS The stump, is not long gone. Paul and Corentine, are still remembered. We do remember our beloved dead after all every month
Share
Followers 0