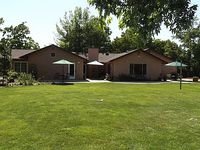 INITIAL REPORT THAT CAME THROUGH THE PARANORMAL HOTLINE: Date to be there: Feb 5 Saturday. Time to be there: 6pm. Contact Person: Willie. Case Number: 9B168Z2119C92. Activity: The home had a murder/suicide by the previous owners. Voices are heard in the home. An entity with a black long robe and hoodie is seen. The home is near Dyer Lane. They have a friendly ghost they call Wilber, along with the negative entity or entities. Extreme evil and negativity is felt in the house. They have a witch for a neighbor. The house maybe cursed. They want an investigation, cleansing. Address to be at:, Elverta, CA UPDATE: I explained to Willie, that I would call him one week ahead of time to confirm the investigation.  That call was made on 1/31/2022.  I called 3 times, only to hear that his phone has been disconnected or is out of service.  I also text him at the phone number that he gave me.  I received no confirmation and had to contact my investigators to let them know that this investigation is most likely not going to be happening.  The investigators notified are shown below:   HPI Paranormal Team That Was Going to Attend: Deanna Jaxine Stinson, Paul Dale Roberts, Heather Colburn, Amy Brimm Miller, Tiffany Gonzales, Christian Appel, Kim Foreman, Tareta Blandford; Chris Singleton; Mike Ouilhon; Ava Foreman; Greg Sellers; Leanne Shriver Leighty; Xandean Smith; Valerie Chenoweth; Ryan Privee and Alaceo "Big Al" Rosatano.   Cursed Home Close to Haunted Dyer Lane When Willie told me about the haunting at his home and where the home was located, my paranormal antennas started vibrating.  Willie's home is very close to the very haunted Dyer Lane.  If you don't know the legend of Dyer Lane, you can read about Dyer Lane here: thehorrormoviesblog.com/2017/08/19/the-legends-of-haunted-dyer-lane-elverta-ca/   - There is so many things that can be causing the haunting, they are: 1. The murder suicide in the home; 2. The neighbor witch placing a curse on the home; 3. The home being so close to Dyer Lane, etc.  There could be multiple portals that have opened near and around his home in Elverta.  In 2010, we had a case in Elverta.  There are definitely strange things happening in Elverta.  Let me tell you about our 2010 case, see below. Our 2010 Elverta Case: HPI investigated a home in Elverta in 2010.  At the home, in the backyard was a very large oak tree.  The occupant of the home said that the oak tree is haunted.  On two separate nights, around 10 pm, they saw a ghostly figure of a cowboy hanging from the tree.  When the female occupant first saw this figure hanging from the tree, she was terrified and screamed for her husband.  When her husband arrived at the kitchen window where his wife was washing dishes, the husband saw nothing out of the ordinary.  The 2nd sighting, the husband who was doing dishes, saw the hanging figure.  Special Note: The wife no longer wanted to do the dishes, because of her sighting of the hanged man and her husband had to start washing the dishes every night and that is why on the 2nd sighting, he saw the hanged man.   The wife did some research and could not find any information of a person being hanged in Elverta, but of course again, there were many hangings that were not recorded in the 1800s.   The wife had enough, when her 13-year-old daughter was at the kitchen sink and saw the hanged man, not hanging from the tree, but staring at her through the kitchen window and he had his face pressed up against the window.  The daughter was so terrified, she screamed and passed out.  The wife immediately contacted HPI.  During our investigation of this home, we did manage to get an EVP recording of a man making grunting sounds.  We also captured an EVP recording of a man yelling..."go get sum rope!"  I conducted a Roman Catholic house blessing and also blessed the tree.  After the blessing, things were peaceful for 2 weeks and then the woman of the house told me that on one night, they heard a tapping on the kitchen window.  I went back to the home and did another blessing and this time, the blessing worked, there were no more sightings of the hanged cowboy, no tapping on the windows, nothing.  The woman of the house called me and thanked me for blessing her home and getting rid of the entity.  I only wonder if there is any connection to both homes in Elverta?