Paranormal Sidenotes Paul Dale Roberts, HPI's Esoteric Detective Halo Paranormal Investigations Man in Black in the Nevada Desert? Paranormal Hotline Call.  Date of Call: 2/6/2022.  Caller's name: Michael Stewart.  Call Location: Memphis, Tennessee.  Time of Call: 15:35 p.m. (Pacific Standard Time).   Michael has a very interesting story.  Michael informs me that back in 1987, he was an airman and stationed at Nellis AFB.  On one particular day, he had a very bad argument with his fiancee.  Michael's finacee was also stationed at Nellis AFB.  The argument dealt with the fact that Michael was intimate with his fiancee's girlfriend and Michael's fiancee found out about it.   Michael's fiancee broke off the engagement and they broke off their relationship.  Michael was devastated, but he knew that he did his fiancee wrong, and that she had every right to break off their relationship.   Michael needed to clear his head and took off and found an open highway in the hot Nevada desert.   Michael lost in his thoughts was driving out in the middle of nowhere.  There was hardly any traffic on the road.  At some point of time, Michael's car had a blow-out.  His car tire was flat.  Luckily, Michael had a good spare.  Michael lit a cigarette and wanted to relax a bit, before working on the spare tire.  Out in the distance, Michael sees a man walking towards his vehicle.  Michael says that perhaps he was 900 yards out in the middle of the desert.  This man was dressed all in black and Michael felt it was odd, that this man was not on the side of the road, but instead is in the middle of the desert.  Michael waves at the man and the man acknowledges Michael by making the sign of the cross with his 2 arms.  Michael watched the man for a while and decided it was time to change that tire.  Michael figures that by the time he finishes changing the tire, the man should be at his vehicle.  Michael was a bit worried, that maybe this man was crazy or something.  Michael steadily worked on the tire and with having a cigarette, watching the man and changing the tire, about 40 minutes went by.  Michael looked out towards the man and to his surprise, the man was still walking towards his vehicle, but made NO PROGRESS in his walking, he was still about 900 yards out in the middle of the desert.   Michael could see that he was walking at a fast pace, but yet he was not making any progress.  Michael lit another cigarette and watched this man and noticed that his face seemed blurry.  Michael was not able to make out his eyes, mouth or nose.   Michael says that his face just seemed blank.  Michael did not want to leave, without helping this stranger and hung out for another hour and to his shock, the man did not make any progress, but yet he was still walking.  Michael could see his legs and feet move, but again, he was still 900 yards out.  As Michael waited, the Nevada highway patrol pulled up to his car.  The patrolman was concerned about Michael and asked if everything was okay.  Michael pointed out to the desert and told the officer that the man out there may need some help and pointed to the area where the man was.  When Michael looked, the man was gone.   The man completely vanished.  The officer wondered if Michael was hallucinating?  Michael swears up and down he saw a man out in the middle of the desert and that this man vanished.  Michael says he never experienced the paranormal, but on that day in 1987, he feels that he witnessed something that was paranormal.  Michael ponders if this was a ghost, an alien or a Man in Black that he has heard about in UFO lore. 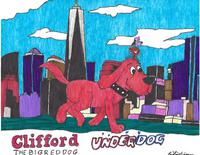 Dogs Have Superpowers Richard Vasseur, our artist came up with the drawing shown above.  That is Clifford the Big Red Dog with Underdog.  As we all know these two dogs have superpowers.  Underdog has super strength, super speed, supersonic flight, physical invulnerability, X-ray vision, super breath, cosmic vision, atomic breath, atomizing eyes, heat vision, ultrasonic hearing, a supersonic high-pitch hi-fi voice and a great calculating brain.  Clifford the Big Red Dog, besides being a giant of a dog, has the ability of Air Manipulation. Clifford's large size and powerful lungs allow him to blow hard enough to produce winds strong enough to put out large fires. This could potentially be used to blow his opponents back or briefly stun them.  So we know that these two dogs have superpowers, but did you know that your own dog has superpowers?  I once had a black Chow named T-Rex and he was empathetic to my feelings, he knew when I was sad, happy or angry.  In fact, all of the dogs in my life had this empathetic ability and I definitely consider that a superpower.  Dogs have the ability to sense what we are feeling.  They have the ability of reading our emotions.  Some dogs have been known to be able to smell cancer and of course if you watch "To Catch a Smuggler" on National Geographic, there are many drug smelling dogs.  I would consider this as a superpower.  I had a dog named Pika, a Jack Russell Terrier and he would be alerted when I blew a dog whistle.  Dogs have super hearing.  Even though I was not able to hear the whistle, Pika knew that whistle when blown, it meant we were going to the park for a walk and he would get very excited.   As a ghost hunter, I would bring my Pekingese Hannah and my Corky named Hi-Pee (1/2 Yorkshire Terrier and 1/2 Cocker Spaniel) on ghost hunts and it seemed that they could both sense a ghost and if they were barking at nothingness, I would go over to see if I could get an EVP and amazingly I did capture an EVP.  They would chase the ghost, bark at the ghost and corner the ghost for me.  They were very good ghost hunters.  T-Rex, Pika, Hi-Pee and Hannah are now in Doggie Heaven and I have two new dogs.  I have Champagne a Yorkchi (1/2 Chihuahua and 1/2 Yorkshire Terrier) and Story an Aushire (1/2 Australian Terrier and 1/2 Yorkshire Terrier).  Champagne and Story go ghost hunting at times with me and my wife Deanna.  Story seems to be able to predict the weather and knows when a thunderstorm is coming and automatically starts hiding underneath some blankets.  Both dogs seem to be aware of ghosts and instead of cornering a ghost, they get into a panic mode and start running away from the ghost.  Another ability that dogs have is when they smell another dog's urine, they can envision that dog in their mind when sniffing where they urinated at.  This is a natural ability of all dogs and I would say that this is a form of ESP.   Dogs are incredible companions and their main superpower is that they provide us with unconditional love.