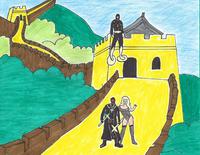 The Drawing Explained: The drawing depicted above was drawn by Richard Vasseur.  Before I was in the paranormal business, I was in the comic book business interviewing comic book creators and reviewing comic books.   In this drawing is the Demon Warrior aka Paul Dale Roberts; Moon Goddess aka Deanna Jaxine Stinson and Iconic aka Richard Vasseur.  The three of us, are investigating the paranormal activity at the Great Wall of China.   In my travels with my stepson Jason Randall Porter and my ex-wife, we visited Hong Kong, Macau, Kowloon, China and rode on a ferry through the South China Sea.  I will never forget China, so many people, so many beautiful skyscrapers and so much to see and explore.  When I got back from China, so many people asked me if I saw the Great Wall of China.  Well, that answer was "no", until now, as I visit the Great Wall of China as the Demon Warrior.  The Great Wall of China is a landmark that stands out for all of mankind.  10 million visitors each year visit this humongous landmark.  To create this gorgeous wall, two million workers lost their lives building the wall.  With this many workers losing their lives on the wall, then just possibly the wall is haunted and from the look of things, it truly appears that way.  Many tourists have heard disembodied voices talking on the wall.  Many of the deceased workers are seen walking up and down the wall.  Another phenomena is the sound of marching steps along the wall.  Some tourists have experienced sudden headaches and nausea. Some History about the Great Wall of China Let's look at some history of this magnificent wall.  The wall is basically a series of fortifications. It protected the Chinese citizens from various nomadic groups from the Eurasian Steppe. It also protected them from the Mongolian war parties.  It was essential to protect the ancient Chinese states and Imperial China.  The wall started as early as the 7th century B.C.  The construction of the great wall was overseen by Qin Shi Huang (220–206 BC), the first emperor of China and the Ming dynasty (1368–1644).  Besides defense, the wall has been used for border control in regard to duties on goods that was transported along the Silk Road.  The Great Wall of China is 24 feet high, 18 foot wide.   The walls slithers along ravines and jagged mountain ridges.  When people see the wall for the first time, they are usually shocked at seeing the massive size of the wall.  Over the centuries there has been many repairs and reconstruction of the wall. It is said that astronauts are able to make out the Great Wall of China from space.  When Emperor Qin Shi Huang ordered construction of the Great Wall around 221 B.C., the labor force that built the wall was made up largely of soldiers and convicts. It is said that as many as 400,000 people died during the wall's construction; many of these workers were buried within the wall itself. A Few Ghost Stories at the Great Wall of China In 1972 Shanyuan Li was with his family and they visited the Great Wall of China.  Shanyuan separated from his wife and 3 kids to explore more of the wall and told his wife where they could meet back up after an hour.  Shanyuan wanted to explore more of the wall during that one hour, while his wife rested with the kids.  As Shanyuan was exploring the wall, he feels he walked through a portal.  As he got to this one point of the wall, he heard a crackling noise and then he felt like he walked through a doorway of jello.  When he was on the other side, he saw many workers repairing areas of the wall.  Some workers were on ladders.   Shanyuan feels like he stepped into the past.  There were old wooden carts carrying supplies and all of the tourists were gone.  The air felt like static electricity.  Then all of a sudden, he felt two hands push him on his chest area and he fell backwards.  He felt the jello again and before he knew it, he was sitting on the ground as some tourists looked at him with confusion.   Shanyuan feels he went through a time traveling portal at the Great Wall of China. My former boss went and saw the great wall of China and he said he did hear some mysterious footsteps in an area where there was no tourists.   Park Wu claims he saw a Chinese cobra slithering around the wall and Park Wu immediately jumped back when seeing the snake.  As he watched the snake, it simply vanished in front of his eyes. This occurred in 1998.   Baozhai Huang in 2001 said while he was walking along the Great Wall of China and a man in a suit was walking towards him.  As the man approached, his shoulder should have connected with Baozhai's shoulder, but the man in the suit's shoulder went right through Baozhai's shoulder.  When Baozhai turned around to see the man in the suit walk away, the man in the suit was no where around, he just disappeared.  From all of these stories, and the dark history of the Great Wall of China, along with all of the deaths and accidents that occurred on the wall, the Great Wall of China is definitely certified haunted.