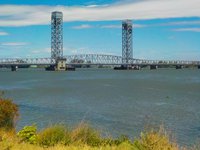 GETTING THERE: Going to Rio Vista from Sacramento is a scenic drive. You have the beautiful Sacramento River to look at, while you drive along a long stretch of highway.  Part of that stretch is called "Blood Alley", because so many vehicles either drive into the Sacramento River or you have head on crashes.   There have been many deaths on Blood Alley Highway.   In fact as we left the investigation I had Mike Ouilhon and Deanna in the car, we came across a big rig that had crashed and it was on its side.  There are so many fatal accidents on this treacherous road.  There has been a couple of reports from drivers that they have seen Blood Alley Alice walking alongside the highway in a white bloody dress.  The drivers see her and as they pass her up and look in their rear view mirror, she vanishes.  People believe she is an accident victim.
THE INVESTIGATION OF DEBBIE'S HOME: Debbie mentioned to us, that the ghosts in this home are not threatening, but she says the basement is creepy as all heck.  We did manage to get some unintelligible EVPs in the basement and outside.  Deanna being a psychic medium, also has the gift of retrocognition.  She has the ability to see past events. She saw a ghostly owl at the next door house and mentioned it to us and Debbie's husband said that there was once 2 owls living on the roof of that house.  Debbie also mentioned  that the house next door is haunted.  Deanna saw a ghostly mailman at that house and when I did an EVP session during her sighting, I received an EVP that was a garbled unintelligible sentence.   We also captured  2 EVPs in the basement and one EVP said "Ryan".  There were old cars in the backyard and Deanna visualized a gargoyle with claws and in one of the cars was an old wooden chair and on the bottom of the chair were caked on mud that resembled claws.   THE INVESTIGATION AT ROBIN'S HOUSE: During the investigation on the 2nd floor, Robin started shaking uncontrollably.  Robin's head started going side to side, it was like she was possessed. Ryan picked up on many swear words on his spirit box.  Wish Fire saw a shadow entity move across a room on the 2nd floor.  I was unable to get any EVPs.  Ryan and I, feel the entities were hiding.   Wish Fire felt that there were dark entities in this home, but trying to locate them was almost impossible.   When I was on the 2nd floor of this home and looking down at Robin's husband Mike and Christian, I heard a whisper in my ear and it said..."jump".  Then I felt a bit nauseated while looking over the balcony.  I left immediately and I was back to normal.  So, in my opinion, I do feel like something is in this house.  Special Note: Deanna says that Robin definitely has a demonic attachment. 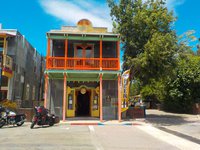 THE CLEANSING: Debbie's home:  I conducted a Roman Catholic house blessing and did a thorough cleansing in their basement.  Robin's home:  I gave Robin a full submersion baptism in her swimming pool and then conducted a Roman Catholic house blessing of her home. ROBIN'S HOME CLEANSING WAS UNSUCCESSFUL: Robin tells me after the cleansing and baptism, it did not work, she still was hearing a buzzing sound in her ear and also was hearing voices, she started crying.  I told Robin I will provide her with other options and will attempt to get the Ghost Adventures crew to her home.  She definitely wants Ghost Adventures at her home. Special Note: Wish Fire left our clients with sage; palo santo wood, blessed candles.
AFTER NOTES: Ryan's Message to me:  "But they were saying all kinds of things after you guys left....they said they're evil, brought up sexual stuff, mimicking her father, they even said Silva her maiden name...the Mel meter and REMHD went crazy when I brought up religious stuff and prayers... the Mel got to 30.9 never seen it get that high. I hope I didn't lose that video."