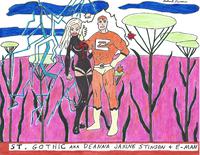 On many UFO encounters, we have stories from abductees that before a UFO snatch them away, that everything goes in slow motion, and they feel that they have no control over their bodies. Everything becomes surreal. At times they feel that time has stopped or slows down to a snail's pace. This is referred to as the Oz Factor. Terrance Young of Arkansas says that a UFO was hovering over his head, a mere 300 feet. When this occurred he says a light beam shown upon him and every thing went still. He could hear a slight buzzing sound, but all of the birds and animals of the forest stopped making sounds. Before this incident he heard crickets chirping, the chirping stopped. He heard rustling in the bushes of small animals, the rusting in the bushes stopped. He heard birds squawking and the squawking stopped. All sounds in this forest stopped completely, except for that annoying buzzing sound. Terrance says that his movements slowed down considerably, he felt like rubber and felt like he had to think on what his next movement would be. The next thing that happened to him was he observed a multitude of sparkles surrounding his body, traveling in a clock ward motion around his body. When the sparkles came close to his body, he felt an electrical charge go through his body. Through regressive hypnosis, Terrance was able to recall this event, but cannot recall anything else; he doesn't know if he went up into the UFO and if he did he does not know what happened, he feels that he may have blacked out. What Terrance explained to me on the paranormal hotline does sound like the phenomenon known as the Oz Factor, a phenomenon experienced by many alien abductees. What strange energy do UFOs emit, that causes such a strange phenomenon that seems to bring about a surreal effect on the experiencer? What is the Oz Factor? The Oz Factor, a term coined by ufologists and author Jenny Randles (b. 1951), refers to the experience of being isolated or transported by the real world of everyday life into another environment which is quite similar to the real world but changed enough to be noticeable and disturbing. Such reports have been common in both UFO and paranormal accounts, but had been pushed aside (their evidential value being somewhat limited) until Randles called attention to such experiences as a common element in some types of UFO encounters. Dwayne Robinson in 1971 witnessed a strange disc moving in the sky over Chico, California.  The disc moved slowly to the left and then shot up straight into the sky.  Dwayne was startled after seeing this oddity in the sky.  Dwayne at the time was standing outside of his car when he witnessed the UFO and was preparing to walk over to his buddy's house.  While Dwayne stood by his car stunned at what he saw, a strange man dressed all in black approached him.  The man in black asked Dwayne if he was okay.  Dwayne says to the man in black..."everything is okay, I just saw the weirdest thing in the sky."  The man in black looks at Dwayne and says..."you saw nothing, you saw nothing".  Dwayne was shocked at what the man had to say and Dwayne looked into the man's eyes and noticed he had large dark pupils.  The man in black walked away and the trees lining the street had no leaves and Dwayne remembers when he was pulling up to his buddy's house the trees were full of leaves and it was June, not Fall.  As Dwayne looked at the man in black walk away...he sort of just faded out.  When the man in black faded out, the trees were full of leaves again.  When Dwayne told me this story, I automatically feel he experienced the Oz Factor and that he also encountered a "Men in Black" entity.  Special Note: Dwayne also says that the man in black was wearing a black turtle neck sweater, black pants, black shoes.  Dwayne felt this was really odd, because it was a hot day in June.  Dwayne was wearing shorts, t-shirt and tennis shoes on this day.