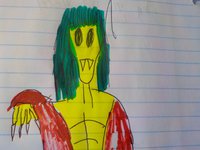 When Deanna Jaxine Stinson and I, went on vacation to Charleston, South Carolina and Charlotte, North Carolina, we noticed a few houses in both cities that were painted a pale blue on certain parts of the house.  We even came across a house that had two trees in the yard and there were glass bottles placed all around the tree limbs.  While in Charleston, we learned that the pale blue paint on homes and the bottle trees are protection from "Haints".  The word Haint derives from the English word "haunt".  According to Gullah folklore, haints are not able to cross water.  Haints who caused havoc at plantations, the plantation owner would paint porch ceilings a soft blue.  Soft blue represents water and this will keep the haints away. When we were in Charlotte, North Carolina, we came upon a house that was painted light blue and the home owner was outside mowing his lawn.  I went up to the home owner and simply asked him if the blue paint was to ward away evil spirits or the haint?  To my surprise, the home owner said "yes".  I learned that the previous homeowners were haunted by a "boo hag" which is another form of a haint. The home owner when moving in, encountered the boo hag and when she touched the home owner on the arm, his arm became partially paralyzed.  I asked the home owner what the boo hag looked like and he said that the boo hag had greenish hair, yellowish skin and a red robe.  The homeowner drew me a picture.  That drawing can be seen with this article.  Note: I added in the color as it was told to me by the home owner.  The home owner said that the boo hag's body was very, very thin, it was almost skeletal. I also learned that this homeowner had a bottle tree in his backyard.   The homeowner says that he painted his home pale blue and decorated his backyard tree with bottles, he is no longer bothered by the boo hag.  I asked the home owner, why he thought the boo hag was a woman and he said that the boo hag laughed after she touched his arm and it was the laugh of an old woman. 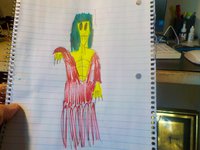 When in South Carolina, I wanted to know more about haints, since California is not plagued by haints.  Haints originated with the Gulla Geechee people.  The Gulla Geechee people are descendants of African slaves in Carolina low country and barrier islands. The legend of haints also harbors in other southern states, not just the Carolinas.  The haint blue that is painted on some houses is derived from a dye that was created by low country indigo plantations.  It was used by enslaved Africans and later by the Gullah Geechee.  Who are the Gullah Geechee?  They are African Americans that live in Georgia, Florida, Alabama,  South & North Carolina.  The Gulla Geechee speak in a creole language. Gullah Geechee believe that the haint can paralyze or injure you and in severe cases they can bring death to family members.  Some haints known as boo hags will come in the night while you sleep and sit on your chest and try to suck out your breath, causing you to die in your sleep from asphyxiation or even causing you to have a stroke or heart attack.   This is very familiar with the Old Hag Syndrome, in which an evil spirit in the appearance of an old hag, or an old witch will also sit on your chest and try to take your breath away and causing night paralysis.  Appalachian historian Dave Tabler says haint can also mean angry dead spirit.  The Hoodoo religion says a witch like creature or haint will chase a victim, until they have died from exhaustion.  Gardening expert and author Felder Rushing wrote a book about bottle trees and makes claim that the word "haint" originated with Europeans.  He says haint has roots to the word hanter, which means  to stalk or inhabit. He dates the word hanter to 1330 A.D. and says haint came about from African Americans in the year 1843.  Legend has it that haints can enter your home from open windows, doors and even small areas like keyholes, cracks in the ceiling, crawlspaces, attics,  broken pipes.  Haints are also known to drain the energy from their victims.   They usually wait for their victim to fall asleep.  There are some stories that haints can be energy vampires and in some rare cases,  they have been known to entice children outside and cause them to get lost in the woods.  In one case a haint lured a child to a nearby pond and caused the child to drown. One of the stories about confusing haints was real interesting.   I  was told that if you paste newspaper or magazine pages on your wall,  it will distract a haint, because they are compelled to read every word on the newspaper or magazine pages that you plastered on the wall and there are actual homes in South Carolina that have glued newspaper and magazine pages on walls to keep the haint at bay.  Another way to keep haints at bay is leaving out bowls of rice or sand, or straw brooms or brushes.  They say a haint will get distracted and will try and count every grain of rice or every grain of sand, or count every bristle on a straw broom or brush.   Yes, I know that sounds  absurb,  but that is  what some people believe in the Carolinas. Bottle trees are a kind of trap which catches the spirits and holds them inside until daylight comes to destroy them. Some legends claim a haint is a spirit traveling outside its skin, and must be back inside the skin before sunrise. Blue bottles are preferred on bottle trees.  To cleanse the house of haints and evil spirits, you can begin by burning sage or incense in every room. Then mop the floors with pine and camphor, and sprinkle salt across doors, windows and in corners.  If you have a bottle tree, it is good to grease the mouth piece of  the bottle.  If you grease up the bottle it will help in the capture of evil spirits.  The evil spirit will be sucked inside the bottle and will not be able to escape.  The morning sun will destroy the haint inside of the bottle.