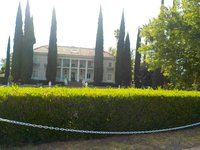 Walnut Grove, CA: Haunted Grand Island Mansion 6/23/2022: Today, brought Deanna Jaxine Stinson, Psychic Medium and my 2 psychic paranormal investigating dogs Story and Champagne to the haunted Grand Island Mansion, located at 13415 Grand Island Road, Walnut Grove, CA.  HPI (Halo Paranormal Investigations) received a report from Jasmine Togay that she was visiting the mansion and trying to decide if she wants her wedding at the mansion and if it is affordable.  While visiting the mansion, she looked over at the Sacramento River with her fiance and saw what she thought was some kind of water elemental.  Jasmine says that the water creature looked human.  When Deanna explored the outer banks of the Sacramento River by the mansion, she glimpsed a water elemental that reminded her of a mermaid.  The Grand Island Mansion is filled with history, you can learn more about the mansion, by going to this link: grandislandmansion.com/history/ As for water elementals in the Sacramento River, I did once receive a report of a water elemental in the Sacramento River, and you can locate that story here: www.sacramentopress.com/2011/12/27/bob-montana-carmichael-resident-sighting-of-a-wetlash/ I have my own connection with the Grand Island Mansion.  In 1979, after I was crowned the disco king of Sacramento for dancing 205 hours (8 1/2 days) for the Guiness Book of World Records and Ripley's Believe it or Not, one of the places I performed a dance show at was the Grand Island Mansion.  In 1979, it was called Club Lido and it was owned by two very rich men.  The  owners would throw these flamboyant parties at the mansion.  I was invited to Club Lido to perform a dance show with some of my dancing ladies and we were the first act before The Tubes came on.  The guests were a Who's Who in Sacramento and the Bay Area.  Some of the guests were 2 members of Fleetwood Mac, who flew in by private helicopter, Tom La Brie of La Brie's Sleep Center, politicians out of Sacramento and other notables.  The two owners of Club Lido stood out by the main gate, leaning against their Rolls Royce and making sure the guests that were coming in, were actually invited.  When you got inside, champagne and caviar was being served. As I mingled with the guests, some of the guests made claim that they have seen the ghost of Grand Island Mansion Architect J.W. Dolliver roaming the hallway.  My  dogs while visiting the mansion, picked up on an entity and started chasing something that was invisible to my eye.  When they cornered the entity, I pulled out my digital recorder and said: "Is there someone here?"  I received this response: "Of course!"  It was a male voice.  Deanna saw several spirits at the mansion and some of the spirits are "living ghosts".  Living ghosts are the residual energy left behind by a person, and that person is still alive.  You can expel powerful positive energy or powerful negative energy into the atmosphere and it will replay itself over and over again.  Talking with a few people that have visited the mansion,  they have told me that they have heard disco type of music playing outside of the mansion and then that music will fade away.  That could be residual energy from disco parties back in 1979. My own energy from long ago could be haunting this mansion.  As Deanna explored the mansion grounds, she spotted a very attractive woman that was dressed like it was the 1930s. The woman was looking straight up a juniper tree and then faded away.  I just wonder if Deanna encountered the movie actress Greta Garbo who has visited this mansion many times during her lifetime.  Another interesting facto, is that Walnut Grove, CA is very haunted.  Right down the street is the haunted Ryde Hotel and you can read about my investigation at the Ryde Hotel here: gateway.forumotion.com/t943-ryde-hotel-and-the-ghost-of-bok-bok-man Also, if you want to read about when I was the disco king of Sacramento, you can get the full scoop here: www.valcomnews.com/tag/paul-dale-roberts/ 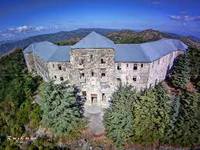 Cyprus: Haunted Berengaria Hotel My Merchant Marine uncle Jose Causing stopped off at Cyprus and stayed at the very haunted Berengaria Hotel.  This hotel had its share of notables that have spent nights in this hotel.  I'm not going to get into the details of who has stayed in this haunted hotel, but will tell you that one of the hotel owners died and he left the hotel to his 3 sons.  There was bickering between the 3 sons and the 3 sons all died mysteriously under suspicious circumstances.  After the 3 sons death, the manager of the hotel commits suicide. When these deaths happened,  the locals started rumors  that the hotel was haunted and that the hotel harbored a curse.  Some locals thought the hotel may be a gateway to Hell.  Locals have seen shadow people at the hotel and heard disembodied voices of people crying and screaming.  When my uncle stayed there he heard a woman screaming, he also heard pounding on his door.  When he went to open the door, there was no one there.  Locals also tell the story of the two female ghosts who are known to roam the hotel. One of them was found dead in the swimming pool, and it’s said she still hangs around the hotel, in an effort to avenge her own death. The other is that of a young woman with distinguishably dark hair who is seen at the hotel dressed in white linen, and can allegedly be seen leaning against one of the windows at sunset.  My uncle says that this hotel is extremely haunted and one of the guests says that he saw the ghost of the woman with dark hair walk down the hall and then walked through a wall and vanished.

Black Forest, Germany: The Black Forest Ogre When I was stationed in Nurnberg, Germany from 1974 to 1976, I placed on my bucket list that I would visit Paris - France, Lake Constance - Switzerland, Bologna - Italy and Insbruck, Austria. I accomplished this. I traveled to Bologna, Italy with my Sergeant Major.  The Sergeant Major was married to an Italian woman in Bologna and she had her own restaurant.  I definitely ate like a king.  I went to Paris from Nurnberg riding on a bus for a mere $24.00 (military discount).  I had to take advantage of these offers.  Another place that was on my bucket list was the Black Forest in Germany.  I was fascinated with the Black Forest, because there were so many paranormal stories about the Black Forest.  You almost have every paranormal high strangeness in this forest from shadow people, missing people, UFOs and even a flying flaming humanoid. During medieval times, a flying, flaming humanoid was said to have flown around a village in the heart of the Black Forest and the villagers started throwing rocks at the flaming flying creature. The creature eventually came to rest on a church steeple.  The flying flaming creature finally flew off, never to be seen again.  When I heard about this legend, I knew I had to visit the Black Forest. During my visit in the Black Forest, I learned about another creature, that I will call the Black Forest Ogre.  This creature lived in the hollow of a tree and when hikers, hunters came upon the creature, it was said that the Black Forest Ogre would pounce on his victim.  When the ogre was on top of his victim, he would hold onto the victim's head and twist it and eventually yank the victim's head off.  The ogre would then drink the blood from the neck of the victim, who is now headless.  The ogre was described as 5 feet tall, fat belly, claws for hands, wrinkled face and bald.  During my visit in the Black Forest, I heard many stories and the only thing paranormal that I experienced was hearing a strange whistling sound.  I could not detect where the whistling sound was coming from, but at times the whistling sound was all around me.  The whistling sound gave me some goosebumps.  I ended my hike and the only hiking I would be doing is during a volksmarch in Nurnberg, Germany.  Volksmarches were a lot safer and I knew I didn't want to be a missing person in the Black Forest.  Believe me, the Black Forest is a very spooky place.