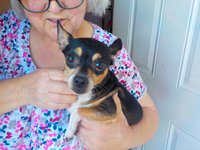 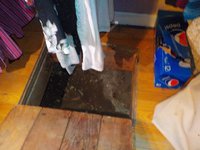 THE ACTIVITY Occupant: Pee Wee.  Pee Wee tells me that they have seen shadow people in the house.  Pee Wee did his own investigation in the neighborhood and discovered that 2 homes near his home are haunted.  One day there was a burning smell in the house and nothing was burning. Strange knocking sounds are heard underneath the kitchen floor.  A rotten smell resonated in one of the bedrooms.  One day Pee Wee was riding his bike near his home and he fell off his bike, an African American man came to assist Pee Wee and asked if he was alright.  When Pee Wee turned around the man had simply vanished.  On another day, there was a trail of blood on the floor and no one knew where the blood came from. The next day, the blood had completely disappeared.  Case # 9B16S670P470A6.
THE INVESTIGATION After our briefing with Pee Wee and his family, Mike and I did an EVP sweep, while Deanna did a psychic sweep.  Mike and I, did 2 investigative sessions and we did not obtain any EVPs.  This doesn't mean that there are no intelligent entities in the house, it may mean that the entities are hiding.  What was very interesting is that Deanna went into one bedroom and saw a girl with strawberry blonde hair dancing.  What Deanna saw was a living ghost.  The girl that Deanna described was the granddaughter.  Pee Wee's mother says their granddaughter loves to dance and even wanted to go to dance school and she has strawberry blonde hair.  The residual energy is called a living ghost, because the entity that Deanna saw is very much alive. The granddaughter was known to project her energy during bad times and good times. The energy that the granddaughter projects is absorbed into the atmosphere and will replay itself over and over again.  Deanna also picked up on elementals in the yard and Pee Wee's sister confirmed that there were elementals that hung around in the yard and they even have many ceramic gnomes in the yard which may attract the elementals. 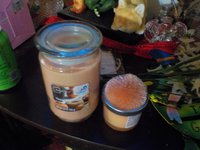 THE CLEANSING Deanna left two blessed candles with the family.   I conducted a Roman Catholic house blessing of the home and crawlspace.