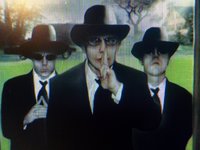 Below is an old interview that I am resurrecting.  I found this interview with this gentleman intriguing. His claim of being a former Men in Black caused me to take notice. Was this guy a disinformation officer?  Was he seeking some kind of publicity?  Or was he just having a lot of fun with me doing this interview?  Go ahead and read the interview and let me know what you think.   Location: Undisclosed. Date: Monday, September 1, 2008 Paul: Good afternoon. May I use your real name in this interview? Mr. Q: No. Paul: Can I call you Mr. Q or a name of your choosing? Mr. Q: (Chuckles). Yeah, Mr. Q sounds good. Paul: Why did you select me for this interview? Mr. Q: You are the most accessible paranormal investigator on the web. You have your cell number right out there for the world to see. When I call, you answer. Plus, you are not just a ghosthunter, but you investigate all things of a paranormal nature. I like the fact that when I call, I get a real person. How many times have you heard that? Paul: Why are you disclosing your status as a former MIB? (Men in Black). Mr. Q: I am tired of the lies of our government. Its time for disclosure. We are not alone. 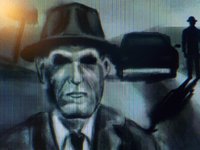 Paul: Did you get fired or did you quit? Mr. Q: Yes, you can say I got fired. I fell in love. The aliens that control American Intelligence MIBs have a way to manipulate our emotions. One of those emotions is love. Somehow I overcame this obstacle and actually fell in love. I was rejected from the MIB program. Paul: Who did you fall in love with? Mr. Q: Move onto the next question. Paul: You look Asian, or Filipino? Mr. Q: I am from the South Pacific. Note: Mr. Q is wearing a tight black t-shirt, black colored jeans, tennis shoes. When I met him he wore black sunglasses. During this interview, he took his sunglasses off. He is muscular and looks very athletic. Paul: What government agency do you work for? Mr. Q: We are an elite team from the South Pacific trained by an American intelligence agency. We were trained near and around the Kwajalein Atoll. I am not disclosing any names of what Intelligence agency is in control of the MIB program. Paul: Why the South Pacific? Mr. Q: The military and a certain group of aliens work side-by-side at underground bases in the Pacific. There are two sets of MIBs. Alien MIBs and American Intelligence MIBs. Paul: Why two sets? Mr. Q: Even though American Intelligence works closely with a certain group of aliens, there is still some distrust. A lot of disinformation comes with the appearance of MIBs. American Intelligence MIBs usually have South Pacific origins. When witnesses encounter AI MIBs, they describe us as having dark skin, slanted eyes, etc. This way it appears a foreign power has their own MIBs, when in reality its our American government. The alien MIBs do their own part in disinformation and send in robotic MIBs that appear to not look modern and drive around in old Cadillacs. When the witnesses are interviewed and describe MIBs, it sounds like they are lunatics. Its all disinformation tactics. We cant send in people that look like average Americans, then our government would be blamed for interrogating witnesses to UFO events. Intelligence personnel and aliens have a sense of humor and find it amusing at how ridiculous many of these witnesses sound after our disinformation campaign has befallen them. Paul: Why are aliens and our Military working side-by-side? Mr. Q: They are involved in many operations from HAARP, technology and DNA developments. I dont even know the full scope of their unison together. My job was to interrogate witnesses of UFO events and to make it seem that their stories were not credible. MIBs are used for disinformation and mind deceptional techniques. Some of the alien MIBs use mind scrambling hypnotic devices in their vehicles. Mr. Q: My time is limited and I must go in a few minutes. I will give you some information that I do know and perhaps at a later time, we can discuss this further. Various alien races have watched over Earth, since its birth. Many variety of aliens have claimed Earth as a territory. It is now a territory that is broken up between various alien races. The American military made an agreement with an alien race to allow the aliens to conduct what you call angel stops. The abduction of humans for DNA experimentation. The American military in turn receives technical tidbits from their alien allies. Another alien race may be preparing territorial claims on Earth and the powers of HAARP may be secretly used in this conflict. Certain individuals are given information to enlighten the masses by our alien allies. One of those individuals is Star Trek creator Gene Roddenberry. Aliens are trying to give us a jump start to prepare for our future. Paul: Well, before you go, is the Military working with the Grays? Mr. Q: They are working with aliens that have territorial control of various sections of Earth. Mr. Q: I must go, thank you Paul. I will keep in touch and perhaps disclose more. Watch how you have your phone number out there and always meet people in public places. When you head over to Skinwalker Ranch, pay close attention to any strange events. (Note: I previously told Mr. Q, I plan to investigate Skinwalker Ranch in October). Paul, you must leave first, I must watch you leave and then I will leave. I do not want you to try and find the car I am leaving in. Paul: Yes, okay (shakes Mr. Qs hand). I understand, that was our agreement. I walk out of the meeting location and start up my vehicle. I look in my rear view mirror and Mr. Q is watching me, making sure I am leaving the parking area. My Conclusion: I do not know if Mr. Q is being deceptive with me or telling me the truth, but I can attest he is not receiving any sort of publicity for this interview. He would not allow me to take his picture and does not want his real name used. I hope he will contact me again, so I can ask him more questions.